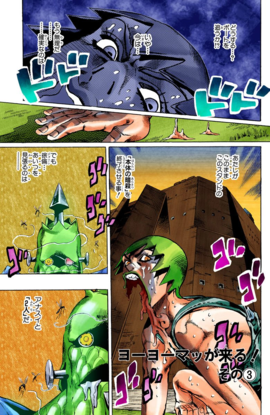 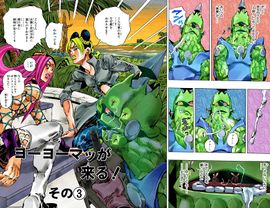 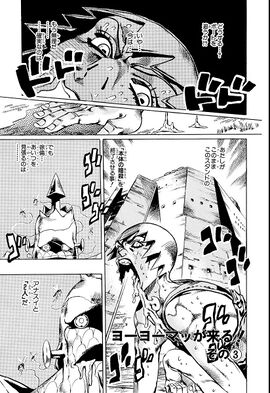 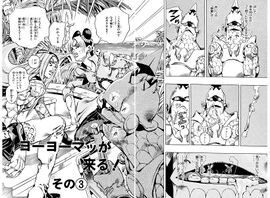 F.F. panics, wondering whether she should go after the boat or not. She ultimately decides that the best course of action is to go after the user and assassinate him.

Jolyne, Anasui, and Yo-Yo Ma are on the boat they previously boarded. Jolyne asks why Anasui stopped the boat in a patch of grass, who explains that he did so in order to quiet down and cut the engines, yelling at Yo-Yo Ma moments later to be quiet when he doesn't obey. Meanwhile, the prison guards' boats go by at full speed; the guards get an alert that there is a disturbance in the punishment ward, and raise security to level 4. Yo-Yo Ma spontaneously impales his eye with the lever that controls the boat, causing ripples to go through the water and give away their location. Anasui spots a machine gun that could tear through both them and the boat, warning Jolyne. The guards, however, have not found the boat yet, suspecting the ripples to be from a gator.

As the guards approach, Yo-Yo Ma suggests they cover themselves in leaves and twigs to blend in with the scenery and disguise themselves. It works only momentarily, as one of the guards finds their anchoring rope in the water. Jolyne fools them into thinking it's their own rope. The guards then get called back, but the motors of their boats blow away Jolyne and Anasui's disguises. Anasui tells Jolyne to start the engine while the guards are still dumbfounded.