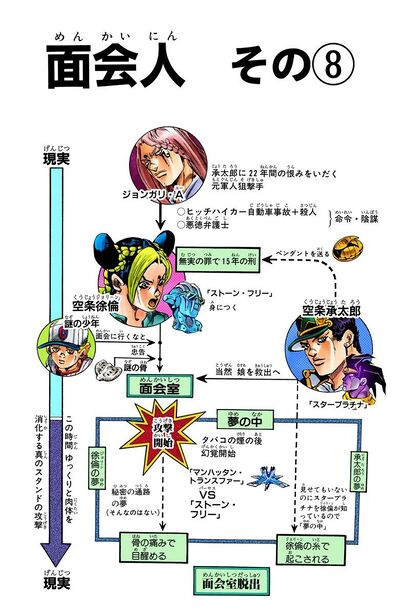 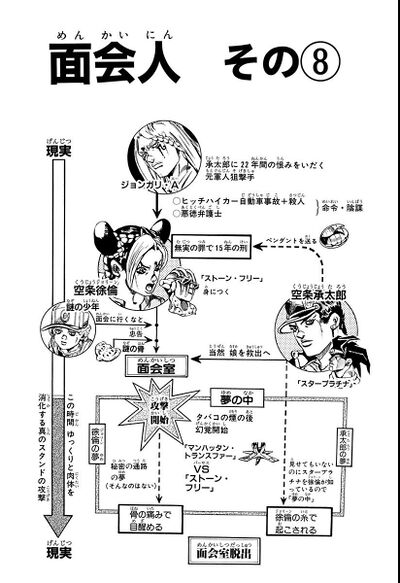 Jotaro and Jolyne run through the prison halls, trying to escape. Jolyne, not paying attention, trips down a set of stairs. Jotaro reaches out his hand to pick her up, but she refuses to accept his help. Jotaro states that he wasn't doing it to be kind, but rather that he wants her to be more careful with the amulet containing a fragment of a Stand arrow. Jolyne snatches the amulet back from him, recalling Jotaro's cold, logical approach to fatherhood. Jotaro states that he doesn't understand what she's talking about, and Jolyne throws the amulet at him in response.

Jotaro realizes that they are being followed and tells his daughter to get down. Two guards appear from another hallway. One guard notices the bent bars and suspects the escapees have gone that way. He is immediately shot in the head by the other guard, who turns out to be Johngalli A.. Jotaro tells his daughter to run for the escape point, and says that he will stay behind to fight Johngalli A.. Suddenly, Manhattan Transfer appears above Jolyne.

Johngalli A. shoots at Jolyne, but Jotaro uses Star Platinum to stop time, and notices that there is another Stand behind him. Jotaro realizes that this Stand is the ringleader, and that it was planned for him to waste his time stop protecting his daughter. Time resumes, and Jotaro pushes Jolyne out of danger. The lead Stand appears behind Jotaro, and removes two discs from his face.