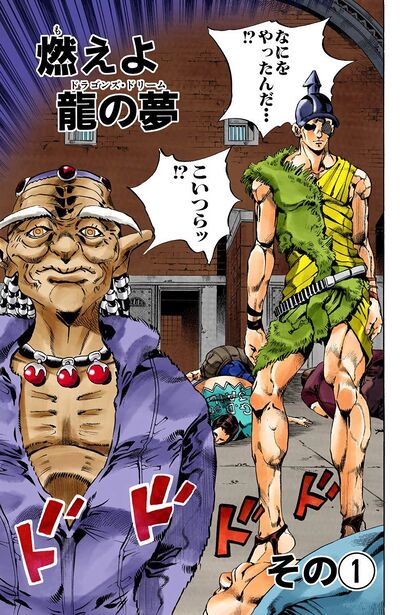 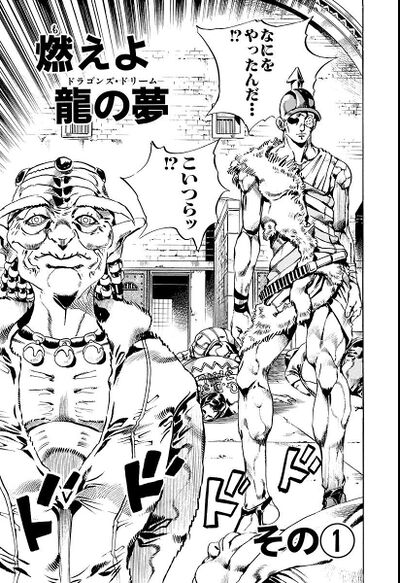 Enter the Dragon's Dream, Part 1 (燃えよ その①, Moe yo Doragonzu Dorīmu Sono 1), originally From the Conclusion (結論から, Ketsuron kara) in the WSJ release, is the sixty-seventh chapter of Stone Ocean and the six hundred sixty-first chapter of the JoJo's Bizarre Adventure manga.

Jolyne realizes that the fight in the Ultra Security House Unit is already over and all the prisoners (besides two of them staring at her) were killed by a Stand user, having the appearance of being drowned. One of the two other prisoners, an old man, exalts Jolyne's determination and valor for fighting so many enemies. He claims to be "Kenzou", 78 years old, a healthy old man who always sleeps eight and a half hours per day and does urine therapy.

Impatient, Jolyne uses vulgar gestures in American, French, Naples and Japanese style. Kenzou, undeterred, tells her he was the one who drowned the prisoners, and that there was one more person to kill before Jolyne. This last person is revealed to be Foo Fighters, who was hiding inside one of the prisoner's bloated bodies in an attempt to preemptively kill Kenzou.

Kenzou remains unaffected by F.F.'s bullets, and F.F. tells Jolyne she will heal her wounds after they finish off Kenzou. Both of them are surprised to see a mysterious man approach from behind; they recognize him as one of the people they had seen in Emporio's ghost room. F.F. continues her battle with Kenzou, but all her attacks are useless against the enemy, who appears to be using his stand to predict their movements. Kenzou then counterattacks F.F. with a punch that starts to 'drown' her.