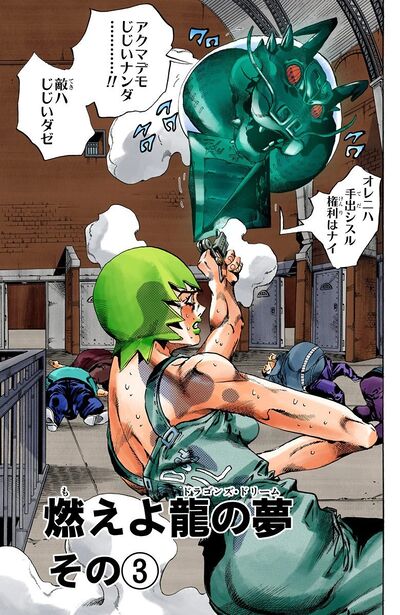 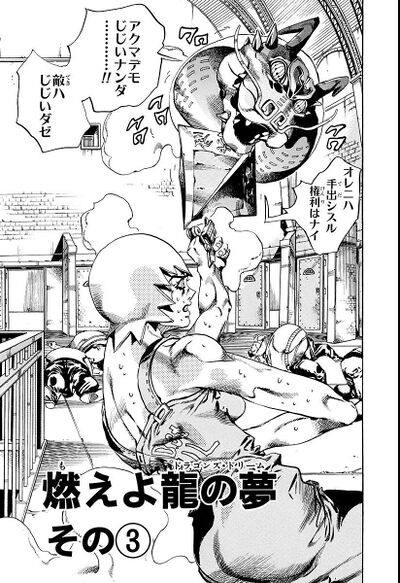 Enter the Dragon's Dream, Part 3 (燃えよ その③, Moe yo Doragonzu Dorīmu Sono 3), originally The Direction of Misfortune (凶の方角, Kyō no Hōgaku) in the WSJ release, is the sixty-ninth chapter of Stone Ocean and the six hundred sixty-third chapter of the JoJo's Bizarre Adventure manga.

After Dragon's Dream warns Foo Fighters that she should be targeting Kenzou, the old man leaps at F.F. She dodges his attack and punches him rapidly, but he manages to block all the attacks. Kenzou leaps into Dragon's Dream, his arm separating from his torso and flying toward F.F. She blocks the attack, and the arm returns to Kenzou. Dragon's Dream tries to warn F.F. of danger, believing it is unfair of Kenzou to be withholding the secret to his abilities.

Suddenly, a door closes on a bloated inmate's head. The door crushes the inmate's glasses, and the shrapnel from it flies straight into F.F.'s mouth. Kenzou and F.F. continue to fight as Jolyne and Anasui sit back and watch. Anasui deduces that Kenzou's ability must have some relation to feng shui.

Anasui explains to Jolyne how feng shui works, and that Kenzou is determining the lucky and unlucky spots, using them to his advantage. Through years of dedicated training, Kenzou developed a Stand that could point out these spots. No matter how alert she is, it is impossible for F.F. to defend against the powers of Kenzou's 'feng shui assassination.'