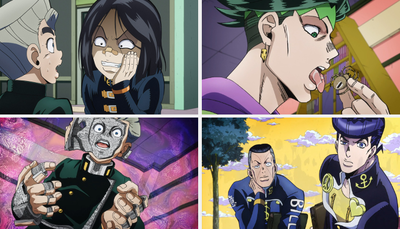 Let's Go to the Manga Artist's House, Part 1 (漫画家のうちへ遊びに行こう その1, Mangaka no Uchi e Asobi ni Ikō Sono 1)[1] is the fourteenth episode of Diamond is Unbreakable and the eighty-eighth episode of the JoJo's Bizarre Adventure anime. It covers Chapter 318 through most of Chapter 321 of the manga. 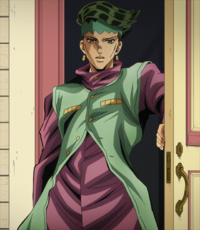 Out of the hospital, Hazamada incidentally meets Koichi in the streets of Morioh. Despite an awkward start as former enemies, Hazamada and Koichi quickly bond over their love of manga. Hazamada then points out that the famed manga artist Rohan Kishibe has recently moved in the town, and the two head to his house in the hopes of meeting him. As Koichi tries to ring the bell, Rohan grabs his arm from behind the door, scaring the boy a little. However, the manga artist is happy to learn they are fans and gives them a tour of his studio.