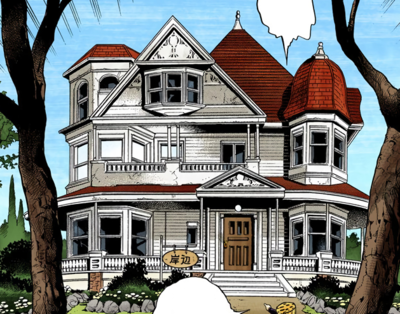 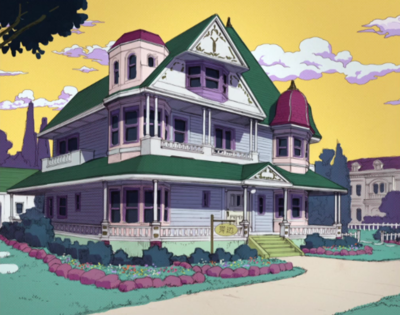 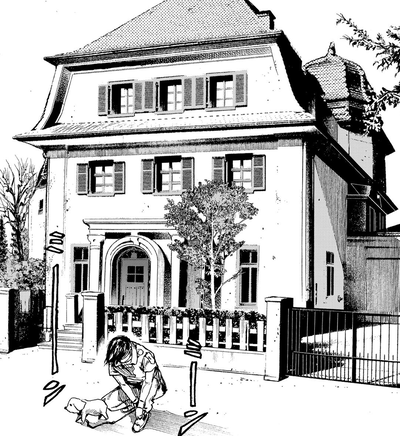 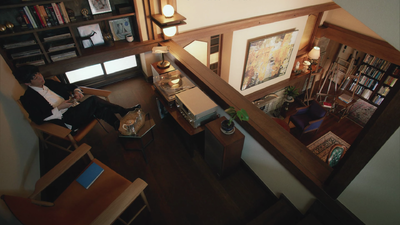 Rohan Kishibe's House (岸辺 露伴の家, Kishibe Rohan no Ie) is a recurring location featured in the JoJo's Bizarre Adventure series. It is simply the residence where the character of Rohan Kishibe lives and works. The house is situated in the Japanese town of Morioh.

Rohan's House is featured in several media. It first appeared in Diamond is Unbreakable but is also featured in the Thus Spoke Kishibe Rohan spin-off series, as well as the spin-off's TV Drama adaptation.

The original form of Rohan's House is a three story tall Western-style house with a garden, situated in Morioh's downtown. The house is mainly built out of wood. Its architecture is heavily reminiscent of the Queen Anne style architecture with its large central triangular pediment, asymmetrical shape, corner towers, and broad porches. The residence has a total area of 3.4 acres (340 m2). The house features a living room, a dining room, a kitchen, an attic, and seven other rooms.[1]

The most important room in Rohan's House is his office where he works on his manga, Pink Dark Boy. It is a large room decorated with Pink Dark Boy artwork, a desk and chair, a few bookshelves, and a drawing board.

The house is partially wrecked by a fire during the game of cee-lo between Rohan and Josuke,[2] with repair costs exceeding 700 million yen according to Masazo Kinoto, although the architect also inflates the costs.[3]

Rohan's house is considered one of Morioh's landmarks.

Rohan's House is briefly mentioned in Thus Spoke Kishibe Rohan - Episode 2: Mutsu-kabe Hill, where he notes that he's lost his house after losing all his money.

In Thus Spoke Kishibe Rohan - Episode 10: Hot Summer Martha, a new and modernized version of Rohan's House makes its appearance. In this one-shot, Rohan lives in his house together with his dog, Bakin. Similar to its original form, the house is still of a Western style with three stories. The third floor bends inwards at a noticeable inclination, with the roof above bending at an even steeper angler. Rohan's estate is fenced with a high iron fence in front of his garage, situated on the right of the house, but the other side seems less protected with only a waist-high wooden fence, which Eve easily crosses. The interior of the house is rather modern as well. Rohan's office is notably equipped with dual computer screens, all the better to converse with his editor Kyoka Izumi online.

In the TV Drama adaptation of Thus Spoke Kishibe Rohan, Rohan's house, and particularly his office, serve as recurring locations where many key events take place. As in the original manga, the house serves as both Rohan's residence and his office to work as a manga artist. The house doesn't appear to be in Morioh.

The Kachi Villa in the town Hayama, Kanagawa was used as Rohan Kishibe's house. As such, it is a two story tall house following the Prairie School of architecture, distinctive with its horizontal features such as flat roofs, open floor plans, as well as mixing brown wood and stone in its architecture. The heart of Rohan's house in the drama is Rohan's office, situated on the first floor. It is a large room whose high ceiling reaches the second story, with a large drawing desk facing the window. Behind it is two chairs and a small table, as well as bookshelves on the side of the room. The back wall is decorated with a large painting, and the room is littered with art equipment, such as several painting easels.

In the novel JORGE JOESTAR, the Rohan Kishibe (Universe 37) from the 37th iteration of the universe lives together with Reimi Sugimoto in the Arrow Cross House, which is named after its shape. The house is eventually revealed to be a Stand.[4]