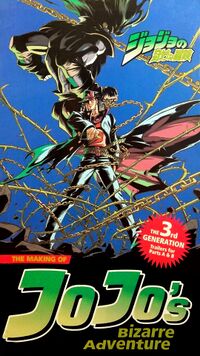 Q - What was the reason for creating new episodes of the JoJo Series?

Q - What's the difference between the original story and the animated version?

KN - In the original story, The Stands are apicated within a single frame, but in the animated version, The Stands play a large role because of their movement, complete with the sound effects.

Q - Is there anything specific that is added to the original story by having APPP do the animation?

KN - For one thing, there are no females in JoJo's Bizarre Adventure. But in the upcoming series, we decided to include one attractive female character. Also, when we created the 6 original episodes, the conclusion was that The 3rd Generation was not complete just from those 6 episodes. So we submitted a proposal for the upcoming 7 episode to complete the story, and Araki-san asked us to go ahead and animate the rest of the story.

Q - What is an ideal project for you?

KN - To work on something that will sell worldwide. Another is to gather together the very best of the Japanese animation techniques and create a superb piece of animation.

Q - In what ways have Japanese animation changed?

KN - It started with black and white TV animation, then color TV series, followed by OVA and theatricals and recently, computer graphics is now included in this list, and we are now facing a transition period, or the beginning of the CG age. There are some animation that are progressive, but even still, they haven't been able to fully incorporate computer graphics. So, the question is to what extent they can fully incorporate CG into animation.

Q - How did you get into the animation field?

NF - About 20 years ago, I went to a graphic design school. When I graduated from there and was wondering what to do at the time, I met this project's producer, Nomura-sen, for the first time, and it was his introduction that got me into this field. Q - What sort of work have you done?

NF - The first key animation I worked on was on the first theatrical of Lupin III. Last year, I worked on Initial D, a TV Series for Japan.

Q - How did you get involved in JoJo's Bizarre Adventure?

NF - Nomura-san, whom I mentioned previously, asked me whether I wanted to work on it. I was given the original story and I found it interesting, and decided to get involved.

Q - How much do you refer to the original story?

NF - Of course the storyline and characters all come from the manga. We're trying to pick up the most interesting parts.

Q - What do you think is the most difficult aspect of JoJo?

NF - The most difficult thing about this project is that the original story is based on a long story, and so we have to shorten it and pick out the most interesting portions.

Q - Who have you been influenced by?

Q - How did you get involved in the animation industry?

JH - Simply because that was the only thing I could do.

Q - How long have you been in the industry?

Q - You're now an art director. Could you give us some background into how you got to where you are now?

Q - What are some titles that you've worked on?

JH - The first TV series would be Fist of the North Star. I also worked on Himitsu no Akko-chan. In terms of video I've worked on other titles, but perhaps the most representative would be JoJo.

Q - How did you get involved with JoJo's Bizarre Adventure?

JH - The director of the previous episodes, Hiroyuki Kitakubo-san, asked me to come on board.

Q - To what extent are you conscious of the previous episodes?

JH - Well, I want to make something that won't lose to the old episodes.

Q - How much do you reference the original story? (manga)

JH - We use the manga to a great extent. I'm personally a fan of JoJo, so I'm hoping to create something that won't go against the expectations of the fans of the manga. I personally like this project a lot and I'm giving it my best shot.

Q - You attended Anime Expo '98. What were your impressions?

JH - This was the first time I came into direct contact with American fans, but they struck me as being very enthusiastic and very mannerly. I felt that there were a lot of fans who made one feel good.

Q - Who were your influences?

JH - The person who influenced me the most is Masami Suda-san, as I mentioned previously.

Q - Japanese animation is being accepted and recognized all over the world. What are your views on that?

JH - In whatever age we're in, trends that are popular change and become accepted. I would like to work on projects that remain whatever the age, rather than what's popular at the time.

Q - How long has it been since you entered the animation industry?

Q - What sort of work have you done?

HO - A lot of it was film-related stuff, and some producing. For film, most of it was theatrical and TV series, and in the production end, it was mainly direct-to-video.

Q - I know you own a filming studio too, but what led you to create a studio for computer ink and paint?

HO - The biggest reason was based on the original 6 episodes of JoJo's Bizarre Adventure. Although we tried to be as creative as possible, there was a large amount that couldn't be done on film. The director was influenced by movies and US animation, and came to request effects that couldn't be delivered on film. So we felt the limitations imposed by film. Leaving quality aside, there's a lot more that can be done on computer in the descriptive end.