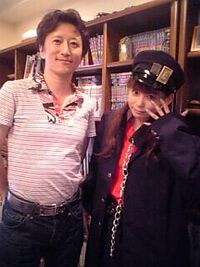 Interview between Shoko Nakagawa and Hirohiko Araki from the Japanese information program, Tameike Now (溜池Now). In an August 2007 episode titled I Want to Receive the World's Best "JoJo's Bizarre" Lessons!! (世界一受けたい!!「ジョジョの奇妙な...」授業), Shoko wears Jotaro Kujo's clothes and visits Araki's office for an interview. The episode was recorded on July 6, 2007.[1]

If you could use a Stand power, whose Stand would you choose and what would you want to do with it?
Araki: Well, which one do you choose, Shokotan? Can I call you Shokotan?
Shoko: Of course! He calls me "Shokotan"! I'm so glad. My dream is to marry Jotaro-sama and have a child with him. He'd probably say to me, "Yare Yare Daze" and spit on me. That's my dream. Sorry, the question was about stands, wasn't it.
Araki: So, Star Platinum?
Shoko: I want to receive 'ora ora' from him.
Araki: (Laugh) Hmm...I think I would choose Rohan Kishibe's Stand. I want to know what people are thinking by opening their minds.
Shoko: You work with various people, so that would be useful.
Araki: Yes, I want to discover the unknown sides to them.
Shoko: It's scary though, it seems like you are already able to use that Stand, I guess.
Araki: (Laugh) Well, yeah. And your choice is Star Platinum, right?
Shoko: I want to be beaten up by him.
Araki: I hope your dream will come true.
Shoko: (Laugh) I am a completely bizarre person.

What type of woman does Jotaro-sama like?
Araki: Type of woman? Uh, I don't think he is interested in women that much.
Shoko: I think he would say, "Yare Yare Daze," to a girl like me, right?
Araki: He definitely would. That is his charm.
Shoko: He would also say: "You are annoying."
Araki: (Laugh) That would be great.
Shoko: That's what I want! I want to have a child with him. How can I make him love me?
Araki: He might say that you're annoying, but he'd still love you, I think.
Shoko: I like it! It's tsundere. Does he prefer a girl who's neatly dressed or one with a short skirt?
Araki: Eh, he is more of a straightforward guy. He will enjoy the time with you, though he might say that you're annoying.
Shoko: Really? Then I will do my best! I think I should go to a disco.


Is Jotaro's school cap a part of his head?
Araki: Yes, it's true.
Shoko: Is it? Why is the cap a part of his head?
Araki: Well, because he never takes off his cap.
Shoko: The cap is part of his body?
Araki: Right. When drawing Jotaro, I felt it was OK to combine him and his hair since he never takes it off.
Shoko: That's a unique idea.
Araki: Indeed. By doing so, Jotaro looks more elegant. I want readers to recognize him from the back, not just his forefront.
Shoko: So he isn't actually wearing a cap. The cap is completely part of his body.
Araki: That is right.
Shoko: Only Araki-sensei could come up with such an idea. It's me who wants to use Rohan's stand to see inside of Araki-Sensei's imagination.

There is a rumor that one scene in the 20th volume of JoJo's Bizarre Adventure predicted the 9/11 attack in New York 11 years before it actually happened. Did Boingo really predict 9/11?
Araki: Yeah, that actually surprised me. I don't know why I drew such a scene.
Shoko: You clearly wrote the word 911 and the laughing plane.
Araki: I don't even know why the plane is laughing.
Shoko: You didn't intentionally draw the scene?
Araki: Well, I don't know. I don't remember. I drew that scene as part of the story, but I don't know what it means. I learned about it recently, but I think it's just a coincidence.
Shoko: Your stand can predict the future. Your Stand predicts the future AND keeps yourself young. (Laugh)

How can one defeat Star Platinum: The World, the most powerful stand ever?
Araki: Eh...Jotaro can be defeated only by Jotaro himself or by the child of Jotaro and Shokotan.
Shoko: You allow me to have his child? So Jotaro-sama and I have a child and he won't be invincible.
Araki: Correct.
Shoko: That's a great idea!!
Araki: Actually, it's impossible to defeat his stand at the moment. Star Platinum can halt the flow of time, so to defeat him, you need to let time flow again.
Shoko: So you would need to possess a power to control time itself? Sounds great.


What do you keep in mind when drawing pictures in color?
Araki: Well, the combination of colors is important. Like what color should be placed where.
Shoko: What is your favorite color?
Araki: My favorite color? Green...or moss green with some white. The mix of dark moss green and white is my favorite.
Shoko: But the color you actually draw with and the color that is printed are somewhat different right?
Araki: Yeah, you're right. So the important thing is not only the color itself but its adjacent colors.
Shoko: When you were a child, what were you drawing?
Araki: I was drawing things like Hakagata Mitsuru, a character from Kyojin no Hoshi. I'm a big fan of Ikki Kajiwara. I was curious how Joe Yabuki's hair looked like when we saw him from the forefront, right side and left side.
Shoko: Ordinary kids draw Joe only from the right or left sides, but you were not a normal kid.
Araki: (Laugh) Yeah.

What type of woman does Araki-Sensei like?
Araki: EH..? This question is hard to answer.
Shoko: Your wife may be watching this show.
Araki: I like a woman like my wife.
Shoko: A good answer. What do you like about your wife?
Araki: As soon as you meet her, you will see that she loves gags. She will often say gags like Shokotan's giza thing (means "super").
Shoko: She uses "giza"?
Araki: When I said to her "Giza Ohayu-su" (Super good morning), she told me I was doing it wrong.