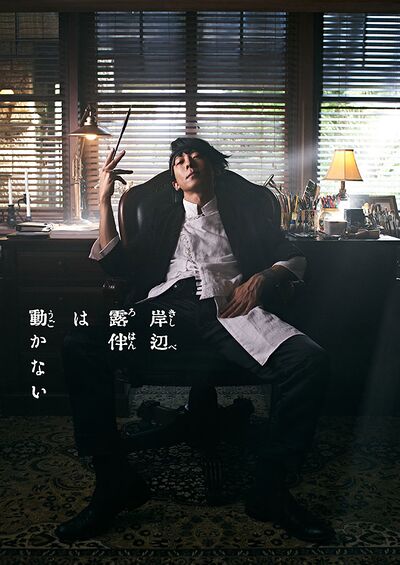 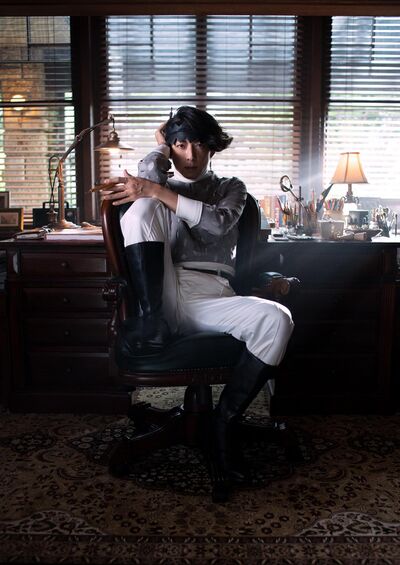 Rohan Kishibe is a famous, arrogant, and eccentric mangaka whose main series "Pink Dark Boy" is enjoying a great success. Unbeknownst to all, Rohan possesses a gift he names "Heaven's Door", which allows him to turn people into books and read into their lives. At the beginning of the series, Rohan meets his new editor, a perky but strong-headed woman named Kyoka Izumi. Together, and to acquire material for Rohan's work, they seek and stumble upon some of the secrets of this world, from yokai to miracles to more esoteric phenomenon.

On April 11th, 2022, the distribution company Digital Media Rights announced it will stream the first three episodes of the series with English subtitles on its streaming service RetroCrush.[4]

On August 14, 2021, NHK announced that a second season consisting of three additional episodes were in production and would be broadcasted in December of the same year. Issey Takahashi and Marie Iitoyo reprised their roles as Rohan Kishibe and Kyoka Izumi. Three additional actors made special appearances in each of the three new episodes: Show Kasamatsu in Episode 4, Ennosuke Ichikawa in Episode 5, and Rio Uchida in Episode 6.[5]

Rohan meets a young man named Yoma Hashimoto at a members-only gym. Yoma is a fledgling model who starts going to the gym after his office president orders him to “build up his body”. However, after this day, Yoma becomes obsessed with running, and his obsession with “running” gradually goes beyond the norm. Yoma shows up in front of Rohan one day for the first time after a while, appearing much more confident. He then proposes to Rohan that they have a running contest on treadmills.
5
From Behind
(背中の正面 Senaka no Shōmen)

A man named Masazo Kinoto, who works in the sales department of a company that undertakes resort development, comes to Rohan’s house. When he invites him in, the man comes crawling in with his back against the wall. When he took off his shoes, sat down on a chair, and drank tea, he smiled affectionately, but never showed his back to Rohan. This strange behavior aroused Rohan’s curiosity, and he forced himself to look at the man’s back. Suddenly, something abnormal attacks Kinoto since his back was seen, and then moves on to affect Rohan.
6
Mutsu-kabe Hill
(六壁坂 Mutsukabezaka)

Rohan goes bankrupt after purchasing a forest on Mutsu-kabezaka Village for the sole purpose of reporting on the legend of a yokai lurking there. Rohan visits the village with Kyoka in pursuit of the mystery of the legend, but finds no clues. Just then, Rohan is confronted by the heiress of the most prominent family in the village, Naoko Osato. Naoko tries to find out the reason why Rohan visited the village, but it seems that she herself is hiding something. After reading Naoko’s memories with Heaven’s Door, Rohan learns the shocking truth about Naoko and Mutsu-kabe Hill.

The Kachi Villa in the town of Hayama, Kanagawa, was used as Rohan Kishibe's house. The drafts of the fictitious Pink Dark Boy manga that appear in the drama were drawn by Masahiko Aoki.[6]

The cafe where Kyoka Izumi and Taro Hirai drink is the real-life cafe Enokitei Honten, situated in Yokohama. Scenes of Rohan Kishibe and Kyoka Izumi trekking in the forest were shot in the forest of Shinano Province in Nagano Prefecture.[7] The cascade where Kyoka rests was identified as the Tateshina Otaki. The luxurious mansion of the Millionaire Village is in reality a house named the Omori-Musasino (大森武蔵野苑). It is a historical site situated in Koganei, Japan.[8] The tea cups used in the luxurious mansion are made of Coalport porcelain in an Adelaide shape with a phoenix motif, dating from approximately 1830.[9] Rohan's own tea cup shown at the end of the first episode is a Saint-Médard silver plated metal tea cup. Manners consultant Hiroko Nishide worked on the episode to guide the production team about the proper manners to adopt.[10]

In Kushagara, the red book that Jugo Shishi grabs in his office is a volume from the Soseki Collection (漱石全集, Sōseki Zenshū), a collection of Japanese novelist Natsume Sōseki's works, published by Iwanami Shoten. The cafe where Rohan meets Jugo Shishi is the real-life cafe Yamata Jubankan situated in Yokohama. The sloped path in which Rohan tells Kyoka about "kushagara" is situated in a road in Yamanouchi. The place where Kyoka meets Taro is the Harbor View Park Observatory in Yokohama. The bookstore in which Rohan meets Jugo Shishi again is the real-life Tenpodokaribe Book Store in Yokohama.[11] The isolated alley in which Rohan confronts Jugo about his obsession is situated in a path in Tama Ward, Kawasaki, in the Kanagawa Prefecture.[12] Jugo Shishi's office was filmed in a building in Kawasaki. The "university building" used in the introduction of the episode is in reality an annex of the Yamanashi Prefectural Office, in Yamanashi Prefecture. The shots of the Kushagara creatures in Jugo Shishi's throat were filmed using an upscaled model of Mirai Moriyama's throat with the creatures being manipulated like puppets by several production members[13].

In DNA, the park used as the production set for the episode is the Sagamihara Park.[14] Mai and Mao Katahira's house is the Megurohonchou studio. The sloped path in which Rohan meets Mai and Mao Katahira is the Motomachi Park's Hitaizaka, in Yokohama. The hospital in which Taro is brought is actually the NHK's broadcasting center in Shibuya, Tokyo.

In The Run, scenes of Yoma running were shot in Shibaura Island, Tokyo. The gym is the gym of the NAS Wellness & Spa CLUB. The scene where Yoma kicks a bicycle is situated near the following address: 1-4-29 Miyamaedaira, Miyamae-ku, Kawasaki, Kanagawa prefecture. The tunnel Yoma runs through is a tunnel is the second Kakinokidai tunnel situated in Ichihara, Chiba prefecture. For the production of the episode, Show Kasamatsu, Yoma Hashimoto's actor, had to follow a strict diet followed by a personal trainer. Kasamatsu also never practiced bouldering and thus his trainer took him on a two-hour practice session before the shooting. Afterwards, Kasamatsu was able to boulder inside of the apartment for the shooting. Kasamatsu reports that he almost cried when the director Watanabe thanked him afterwards.[15]

The alley serving as a boundary to the other world in From Behind is actually an alley adjacent to the Chiyoda Kajicho Post Office in Tokyo.[16]

The village in Mutsu-kabe Hill is the Japanese village of Akasawa, with part of the episode being filmed near Akasawa's Osakaya inn. Kyoka Izumi's cakes are cakes from the Nicolas & Herbs brand. The Osato House is the Kiunkaku, a historical hot spring hotel situated in Atami, Shizuoka.

Season 1's promotion was rather modest, mainly consisting of a trailer and an interview with Issey Takahashi in Ultra Jump about the TV Drama, as well as several online interviews.

Season's 2 promotion was more ambitious, with not only several teaser trailers, but also unique events and interviews.

One of the promotional events for Thus Spoke Kishibe Rohan was “My Rohan Kishibe Talk” (私の岸辺露伴語り, Watashi no kishibe rohan katari), a talk show which aired on December 18, 2021 at 11:10 – 11:39 PM JST and was rebroadcasted on December 27, 2021 at 12:53 AM JST. In this program, Issey Takahashi, Rio Uchida, Yasuko Kobayashi (the screenwriter for both the TV Drama and the anime), and culture critic Sayawaka talk about the unique worldview and appeal of the original work, the anime, and the drama while analyzing the secret of its popularity.

Finally, a special exhibition about the TV Drama was held in Sendai from December 14, 2021 to January 10, 2022 at Sendai's NHK Sendai Broadcasting Station. The exhibition displayed the costumes of the series' characters as well as original design drawings by Isao Tsugo, the face books that form when Heaven's Door is activated, and various props and accessories used in the series.

Thus Spoke Kishibe Rohan won the monthly Galaxy Award for the TV show category in January 2021. It was chosen because the drama beautifully recreated the bizarre world of the original work, and was steeped with a unique aesthetic sense with meticulous art and direction. Yasuko Kobayashi's script accurately depicted the essence of the original work and the actors all played their parts well. In particular, Mirai Moriyama made the most of his physical abilities and excellently portrayed a sense of discomfort with his character, Jugo Shishi.[17]