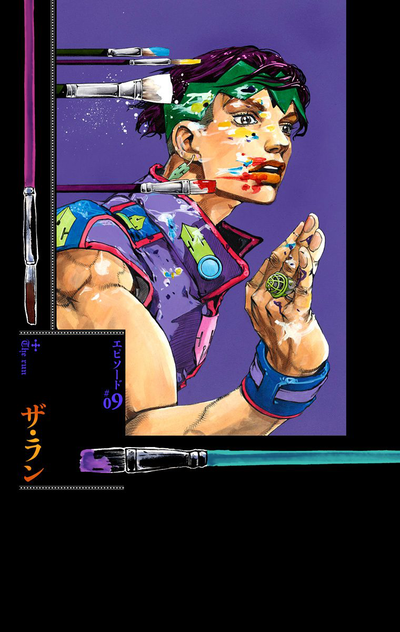 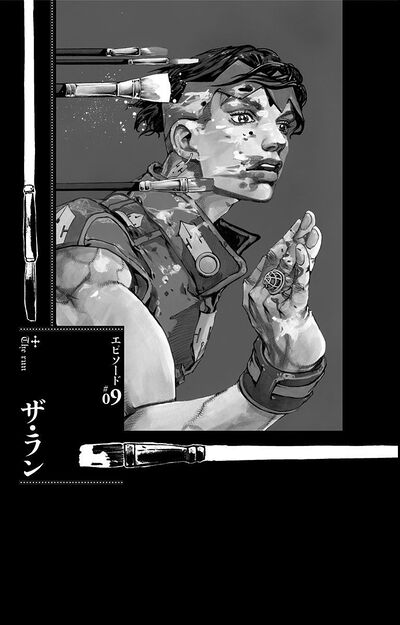 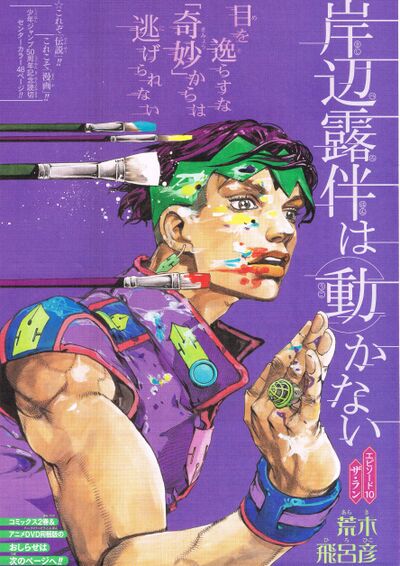 The chapter was published in the thirteenth issue of Weekly Shonen Jump magazine on February 26, 2018.

On August 18, 2019, an OVA adaptation by David Production was announced. The episode was screened at select Japanese theaters and was eventually released on Blu-ray and DVD on March 25, 2020.[2] Another adaptation of the one-shot was produced as a TV Drama and broadcasted on December 27, 2021.

At the heart of Tokyo lies Harajuku in which a young man named Yoma Hashimoto was scouted by a model production agency. Beginning to make a name for himself, Yoma began to seriously exercise at a gym and developed a narcissistic streak. Yoma's training had become so invasive his girlfriend, named Mika Hayamura, would trip on weights lying around in her apartment. Obsessed with exercising, following a draconian diet, and abandoning all social activities, Yoma's relationship with Mika soured drastically. It eventually led to Yoma stealing 270,000 yen from Mika to buy equipment and her ordering him to leave.

At the gym, Rohan and Yoma were running side by side on two treadmills which were connected to the same remote, sitting on a small table between them. The treadmills had a setting on which they would gradually accelerate up to 25kmph and the two would try to grab the remote first once at maximum speed. Remembering his last humiliating loss, Yoma tried to ignore Rohan who made the mistake of teasing him about his work, and thus he accepted the challenge, taking off his sweatshirt to reveal his new ripped body. Losing confidence, Rohan was amazed at the tremendous progress of his rival and noticed subtle wing-shaped muscles, from Yoma's legs to his back.

Wanting their game had to be "fair", Yoma grabbed a dumbbell and broke the window behind them with it. The loser would inevitably trip and thus propelled to a certain death by the treadmills. Panicking as they approached the 25kmph, Rohan tried to preemptively grab the remote, but Yoma intercepted him and broke three of his fingers. At this same moment, Rohan managed to use Heaven's Door and discovered that his obsession with fitness led him to kill his entourage for "interfering with his training". At 25kmph, Rohan was inevitably bested, but Yoma, claiming his victory, noticed too late the scribbling on his hand. Rohan used his Stand to make him use the remote on his treadmill instead. Yoma was flung out of the window while Rohan's treadmill stopped. They were at the 8th floor of the Morioh Grand Hotel.

Rohan has guessed that Yoma had become the avatar of the god of muscle: Hermes. In angering such a being, Rohan has learned that he'd crossed a red line. Hoping to not have invoked Yoma's wrath, all Rohan was worried about was to run from the spot he stood from. 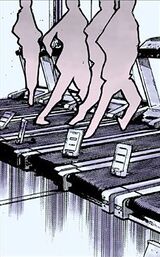 “
I've revived the type of muscled character that I liked drawing in JoJo's Bizarre Adventure during the 80s. I'm the first to be surprised by this. It really felt like I was reviving something. I have the feeling that someone like Yoma Hashimoto really exists somewhere. What a dreadful character.
”
—Hirohiko Araki
“
80年代、「ジョジョの奇妙な冒険」で目指していた、筋肉キャラクターをここに来て復活させてしまいました。なんとその事に、僕自身が驚いています。
復活させてまったという感覚です。
「橋本陽馬」どこかに居る感じがします。本当に恐ろしいキャラだ。
”
—Hirohiko Araki