The Louvre Invites The Comics

The Louvre invites the comics 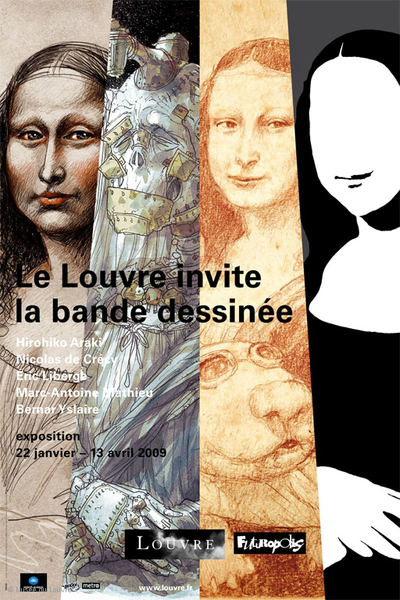 The Louvre invites the comics (Le Louvre invite la bande dessinée) was an event held to celebrate the collaboration between French publishers The Louvre Collection (Musée du Louvre Editions) and Futuropolis. For the event, a series of original French bande dessinées (BD's), Japanese manga and American comic books were published and showcased at an exhibition in Paris, France from January 22 to April 13, 2009 at the Louvre.

The event was organized by Fabrice Douar, deputy director of the department of publications at The Louvre Collections and Sébastien Gnaedig, the editorial director of Futuropolis. With scenography by M.-A. Mathieu.[1] The exhibit was later reopened from January 28 to February 28, 2010.[2]

The exhibit featured five artists: Hirohiko Araki, Nicolas de Crécy, Éric Liberge, Marc-Antoine Mathieu and Bernard Yslaire. The venue was open daily, except for Tuesdays, from 9am to 6pm, and until 10pm on Wednesdays and Fridays in the Sully Wing on the mezzanine floor of the Museum.[3]

Louvre No. 9: The Ninth Art, Comic Books (ルーヴルNo.9 ～漫画、9 番目の芸術～, Rūvuru Nanbā Nain ~Manga, Kyūbanme no Geijutsu~) was a Japanese exhibit first held from July 22, 2016 to September 25, 2016 at the Mori Art Museum in Tokyo.[4] This exhibit was later held from December 1, 2016 to January 29, 2017 at the Grand Front Osaka North Building in Osaka, then from April 15, 2017 to May 28, 2017 at the Fukuoka Art Museum in Fukuoka and from July 15, 2017 to September 3, 2017 at the Matsuzakaya Art Museum in Nagoya. Announced on May 2016, the exhibit was established by the Louvre Museum to celebrate the ninth prestigious art medium, comic books. Among sixteen other artists,[5] one of the exhibits main highlights was Hirohiko Araki's Rohan at the Louvre, presented at a large display.