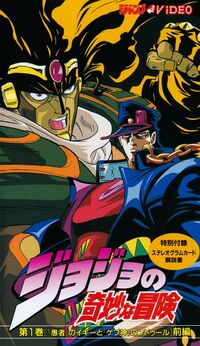 Araki: Despite the fact that I am the author, JOJO is a manga that I have trouble describing. In view of its success, I guess it must be a good series.

We asked the author of Jojo's Bizarre Adventure, Hirohiko Araki today, his impressions of the animated adaptation of his work. Discover what he revealed to us.

What did you think of the adaptation project at the beginning?

Araki: In the OVA, Jotaro's adventures in Part 3 do not take place in a continuous thread, but rather, in small pieces. It comes across as highlights of the things people liked the most. That seemed fine to me. I wanted something that would satisfy buyers, something that would please fans, something really addictive and exciting. I asked them in particular to make a 'beautiful anime'.

Your impressions of the 1st episode (episode 8)?

Araki: Well...Although I am the author of the series, I was really ensnared by it. Not necessarily because it was good or bad but just at the level of history and suspense it had. For example, when Polnareff flees holding Kakyoin I said to myself: "faster! faster!" These are the impressions I felt.

The music is really good. It's called the soundtrack, I think. I realized that it really was different from any other anime so far.

What did you think about the voice acting?

Araki: The first time I listened to them, I thought: "Ah, okay, so that's how they sound." But that isn't an unpleasant impression. I think this anime admirably adapts my work.

Here are some comments from the director, Mr. Kitakubo.

Kitakubo: I've already discussed this project once before with Mr. Araki. As it is a manga that exudes intense energy, I expected an equally energetic author. When I met him, I found him very open. I wouldn't say he is 'sweet', but my impression of him was that he was a little effeminate. His kind of words can be vexing. How can I put this..? He's like a girl with a very dark character. He's not really macho, and I think his eyes are a bit feminine too. In talking with him, I learned that he watched a lot of movies and read novels. He always seems to be looking for ideas to exploit in his manga. One feels in him a great desire to enrich his work. It is really very interesting. Working with him during this work really inspired me. It's very hard but I want to do my best to do surpass the original manga.

Araki: Episodes 1 and 2 are really well done. I look forward to the rest of the series. I hope that the feeling of presence in the other episodes will be as well done.

As you can see, Mr. Araki seems very happy with the anime. Mr. Araki, thank you very much. The production of episodes continues! We wait for them impatiently!