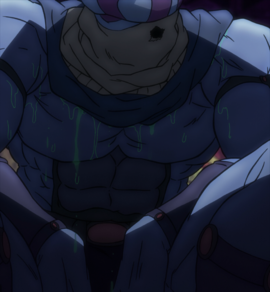 Chapter 37 - The Three from a Faraway Land, Part 2

Chapter 37 - The Three from a Faraway Land, Part 2

Doobie is a large, muscular zombie who has fangs and claws. He wears a gunny sack

on his head as a mask to hide the multiple snakes lurking in his head and face. The mask has one hole on the left side that presumably allows him to see. Additionally, he wears a deerstalker cap

and a scarf. His body is adorned with various jewelry and armor, including a necklace, bracelets, wristbands, shoulder pads, and cloth wrapped around his ankles.

His chest and thighs are left exposed, while an armored plate covers his stomach. Below it, he wears a belt and underwear. His body is also coated in some sort of liquid. 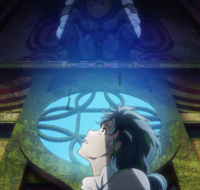 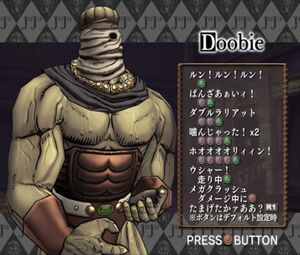 File:DoobiePS2.jpg
Doobie appears in Chapter 19 as one of the last enemies faced before Dio. Doobie's special attack uses the snakes from his face to attack and poison the enemy. Several "cat-birds" and "dog-men", Dio's chimeras, fight alongside Doobie. He is a playable character in Extra Battle Mode and 77 Rings Knights Mode.