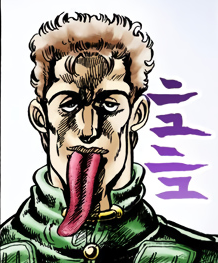 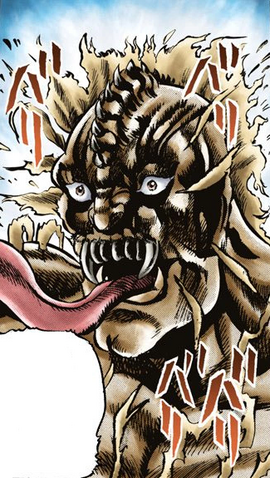 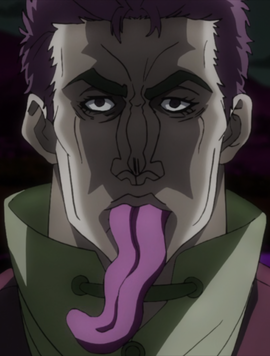 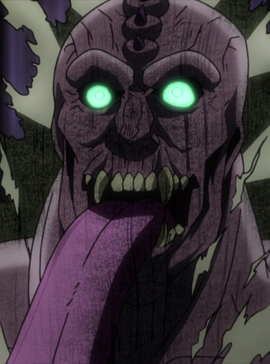 Phantom Blood (PS2 Game)
“
She'll lock you in the barn when you get home, and feed you some bitter medicine to boot!帰ってきたらオメーのこと牛小屋にとじこめてにがい薬のませてやるとよォ！
”
—Adams to Poco, Chapter 36: The Three from a Faraway Land, Part 1

In his human disguise, Adams is an ordinary man of average height and a muscular build. He has short curly light hair with two thin bangs. He has a particularly long and wide nose. Adams wears a vest with pockets on both sides on top of a collared long sleeve shirt. He carries a messenger bag

around his shoulder. Below, he wears a belt, thick pants, and long boots. 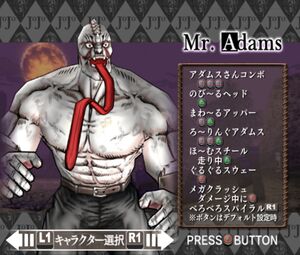 File:MrAdamsPS2.jpg
Adams appears as an enemy faced before Jonathan's confrontation with Dire. His only special technique is attacking with his tongue. In Dio Mode, there is an extra event where he teams up with Doobie to defeat Dio. He is only playable in 77 Rings Knights Mode.
Mr. Adams
Commands
Name

Swaying Round and Round