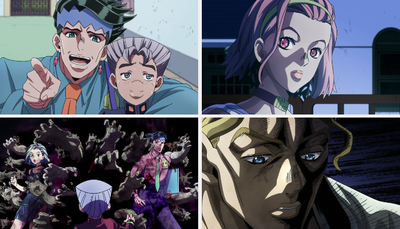 Rohan Kishibe's Adventure (岸辺露伴の冒険, Kishibe Rohan no Bōken)[1] is the seventeenth episode of Diamond is Unbreakable and the ninety-first episode of the JoJo's Bizarre Adventure anime. It covers Chapter 330 through Chapter 334 of the manga.

Koichi meets Rohan again. The two of them discover an unmapped alley in the middle of Morioh and decide to explore it. It quickly becomes apparent that the alley is not a normal alley.

Koichi assists Rohan in going to a strange alleyway in Morioh

Sneaking up on an unsuspecting Koichi, Rohan, who has recovered from his injuries from Josuke, enlists him to find out about the strange alleyway that isn't on the map of Morioh. His reasoning is due to admiring his character when he read his memories.

As they entered, they find that as they keep going around corners, they keep finding themselves on the same street with a mailbox. They are then approached by a girl named Reimi Sugimoto, whom Rohan immediately suspects to be a Stand User, and proceeds to use Heaven's Door against her. To his surprise, she turns out to be a regular girl as he keeps reading more about her character, while Koichi scolds Rohan for reading far too much of her personal information. After writing down a command for her to forget the ordeal, Reimi then interacts with the two, much to Rohan's displeasure.

Reimi Sugimoto reveals that she is a ghost

When she narrates a Ghost Story, a dog with a slit throat then comes by her side, much to Rohan and Koichi's surprise. She soon reveals that both she and her dog Arnold are the people of the story, and are actually spirits. This also reveals that the Ghost Alley is a limbo between the World of the Living and Heaven. This shocks Rohan, as he remembers that he can only read information of the person of when they were alive. Reimi informs the others that the man who murdered her has been secretly killing others and asks them to stop him. After they agree, Reimi points them towards the exit, warning them not to turn around too soon as they will be pulled into the afterlife by dark spirits.

Just as they near the exit, a panicked Koichi sprints toward the exit, but Reimi assures that he has reached the exit already. Unfortunately, that wasn't Reimi at all, as it turns out that the dark spirits have tricked him, much to Reimi's shock and surprise, as they haven't tried to trick her before. Fortunately, Rohan manages to use Heaven's Door to get both him and Koichi to safety. Afterwards, Rohan meets an old man at Reimi's grave, learning that he was once friends with Reimi, who had saved him from being murdered as well.

Meanwhile, as Koichi informs Josuke and Okuyasu about the murder, Josuke soon says that they can't help her if the man was a regular person since Jotaro and Joseph won't help this way. As Koichi walks away discouraged, Josuke quickly grabs him off the road before he was run over. The man who nearly did merely stares at them when Koichi apologizes, where he then proceeds to close his window. The man, Yoshikage Kira, is talking to a woman about his heritage from his ancestors, where all he is left with now is his Grandfather's old home. The scene soon reveals that he's been talking to a severed hand the entire time.

“
Here is Reimi's first appearance, a character who will play a key role later in the story. This is also the starting episode where Rohan begins to progressively steal the spotlight (laughs). We also begin to learn a little more about Morioh through the sad story surrounding Rohan and this young girl, as well as Morioh’s other inhabitants, all bound by the same curse.

That said, condensing all this exposition into one episode wasn’t easy. In theory, I would have liked more time to develop a more suspenseful atmosphere, but it was clear that it wouldn't fit. It's already the first episode where the opening and ending are cut: the time was extended as far as it could go.

Reimi is an adorable character, I found her depiction very successful. Her voice actor, Sayuri Hara, is still quite young, but is totally in phase with the character, and knows how to take into account the atmosphere surrounding a ghost. Some new blood is always welcome within JoJo’s monstrous cast, which is sometimes hard to direct. In a way, she represents Part 4’s cast the best.

The alley is the frontier between our world and the afterworld. To portray this otherworldly feeling, we used a color palette totally different from the usual.

I want to talk about the clothes again: Take note that starting from this episode, Rohan’s clothes will change every time he appears. It’s always difficult to have so many pattern variations and designs for one character. Honestly, Rohan is making our lives hard (laughs).
”
—Naokatsu Tsuda, Blu-Ray limited edition commentaries