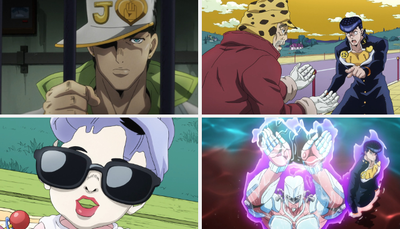 We Picked Up Something Crazy! (やばいものを拾ったっス！, Yabaimono o Hirottassu!)[1] is the thirteenth episode of Diamond is Unbreakable and the eighty-seventh episode of the JoJo's Bizarre Adventure anime. It covers Chapter 315 through Chapter 317 of the manga.

Akira Otoishi has been defeated and now Josuke faces a new problem: how can he and his estranged father Joseph get along despite Joseph's absence throughout his whole life.

Following Otoishi's defeat, Jotaro manages to retrieve the Bow and Arrow, though urges Josuke and the others to be careful of any Stand users that were created.

Josuke is cold towards his own father, Joseph Joestar
Meanwhile, Josuke is revealed to feel very awkward about his estranged father Joseph, having never met the man in his life and feeling no kinship. When Josuke asks Joseph to simply observe Tomoko from afar and leave the town, the old man feels sad about his son's coldness but still agrees. After being distracted for a moment, Josuke notices that Joseph has boarded a bus which will go out of town, forcing Josuke to come after him.

Joseph applies makeup on the baby
After a frustrated Josuke manages to catch up to Joseph, the old man sees suspicious handprints on the soil. He tells Josuke that there is an invisible Stand User nearby but Josuke is sceptical as he believes Joseph is going senile. However, Joseph then uses Hermit Purple to save what is revealed to be an invisible baby girl. Josuke and Joseph are then stuck with the infant who then soils herself, forcing Joseph to go to a specialized shop and buy baby supplies. The vendor proceeds to confuse Joseph with his large range of products, making Joseph spend all of Josuke's money.

Josuke smiles at his father after their bonding moment
After spending a fortune on baby supplies, Joseph tries to dress up the baby, only for her ability to start making everything within a radius, including Joseph's hand, invisible as well when she starts crying. Things get hectic when Joseph accidentally knocks the baby's stroller into the river. In the clear water, Josuke cannot find the baby and angrily shouts at Joseph for his mistake. Feeling guilty, Joseph decides to slit his wrist in order to use his blood to reveal the baby's location, allowing Josuke to rescue her. Initially mad with him, Josuke comes to admire Joseph until he realizes how much he spent on baby supplies.

“
This episode really spotlights the father-son relationship between Josuke and Joseph. It's a bit awkward in the beginning, but it's good to see the gap fill between them, little by little. A story centered around human feelings is very rare in JoJo, although it’s dotted with comedic elements.

The music playing at the end is an arrangement of a music track from part 3. It evokes Joseph as an old man but still ready to do the impossible and help those around him. What this golden-hearted old man does to save the little girl is admirable.

Episode 13 also marks a pause in the first half of part 4. As such, it summarizes the situation thus far and spreads clues about upcoming events here and there; the best example being Rohan Kishibe’s sudden appearance. It's about reminding the audience that even with Akira Otoishi’s arrest, there are still a lot of Stand Users created by the bow and arrow who are roaming free. Let’s keep our guard up!
”
—Naokatsu Tsuda, Blu-Ray limited edition commentaries