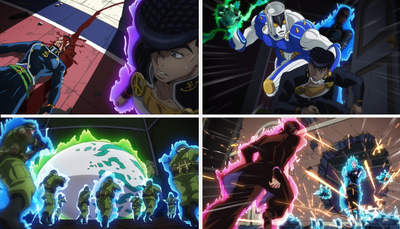 The Nijimura Brothers, Part 2 (虹村兄弟 その2, Nijimura Kyōdai Sono 2)[1] is the fourth episode of Diamond is Unbreakable and the seventy-eighth episode of the JoJo's Bizarre Adventure anime. It covers the second half of Chapter 276 through Chapter 280 of the manga.

The battle against the Nijimura Brothers continue. Koichi has been struck with an Arrow and dragged inside the house so Josuke must go inside to save his friend. 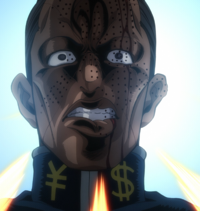 Okuyasu's face is riddled with holes from his brother's Stand attack

Josuke and Keicho face each other in the main entrance while Koichi is still bleeding out and Okuyasu is waking up outside of the house. Okuyasu barges in, unintentionally revealing that Keicho is attacking right now. Keicho's Stand attacks, resulting in Okuyasu's face being riddled with small holes. It attacks again, forcing Josuke to escape the house. Josuke also takes Okuyasu with him, but his hand is pierced multiple times in the process.

Keicho is confident that Josuke isn't the kind to abandon Koichi, so he drags the latter further inside. Josuke interrogates Okuyasu about Keicho's Stand, who stays silent but is healed anyway. Confused, Okuyasu asks why Josuke did that since they're enemies and Josuke answers that he wants nobody to die. Josuke enters the house, goes up the stairs, and sees Koichi in the middle of a dark room. The younger Nijimura brother then uses The Hand to teleport Koichi toward Josuke, and departs, saying that he's repaid his debt and won't intervene in the fight anymore.

Josuke heals Koichi and then gets attacked by Keicho's Stand - Bad Company - which is comprised of a miniature army, complete with tanks and assault choppers. Koichi is now able to see Bad Company, meaning he has become a Stand user too. Keicho reveals himself as he's interested in Koichi's ability, and to force him to summon his Stand, has him stabbed by a miniature Green Beret. Koichi's Stand is revealed to be an egg and Keicho, satisfied, proceeds to separate Josuke and Koichi with a barrage.

Josuke sits as he waits for the incoming missiles

Keicho has cornered Josuke and claims he will methodically take out his legs, then arms, and finish him off by destroying his head. Koichi plans to attack Keicho with his newly-acquired Stand but Keicho knocks him away. The first two stages of Keicho's plan succeed due to a landmine wounding Josuke's foot and leg when he tries to break through Keicho's attack, and two missiles hitting Crazy Diamond's arm, and by extension injuring Josuke's as well. And thus, Josuke is rendered helpless, as predicted. Keicho uses all of his troops in the final attack but Josuke reveals that Crazy Diamond has restored the broken missiles that Keicho used to injure his arm to their original form and shoots them back at Keicho, blinding him when the missiles hit him in the eyes and defeating him.

“
First of all, let's talk about how Bad Company was depicted. The compositing team went through hell for this Stand, so when I told them that I liked it, it was mostly to encourage them.

In regards to the story, the Nijimura house's layout is particularly interesting. A house with three floors is quite rare, and there's these long stairs where a significant part of the plot progression occurs. Of course, the fight needed meticulous attention, with its subtle use of the house’s obscurity.

Keicho Nijimura also left a good impression at the end. As expected of a character that is often placed in the top 3 "big brother figures" in JoJo. Okuyasu and him make a heck of a pair. His little brother finds himself in the line of fire? No matter, let’s shoot him in the face, “pew pew pew!” (laughs). Keicho’s lines are also a little crazy. “Is this your first time”, he says to Koichi when he awakens his Stand. Of course that’s his first time! You just shot him with an arrow (laughs)!

The CD Drama also has a few of my favorite lines. In short, I really do like this character.

In this duology of episode 3 and 4, Josuke plays the main character in a very cool way, which seems perfect for his role. At the same time, Koichi lands into trouble and that’s only the beginning for him.
”
—Naokatsu Tsuda, Blu-Ray limited edition commentaries