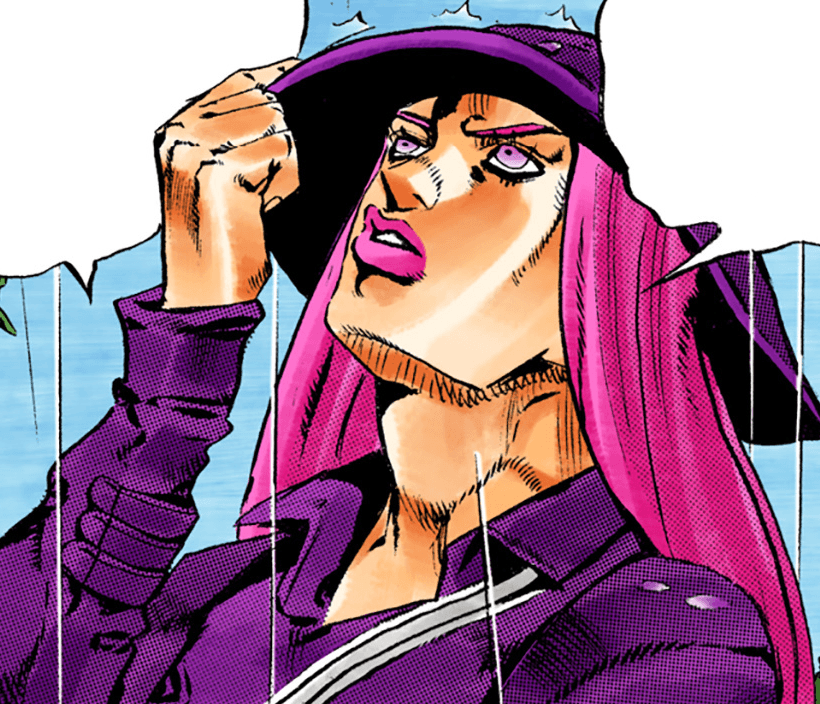 Anakiss's physical features are similar to his original self, donning a different set of clothing, consisting of a coat with a diagonal stripe down the middle, bootpants and a long fedora with feathers on-top.

Presumably not as maniacal as his original self due to not being a convict, Anakiss is a typical carefree juvenile who is in a relationship with his girlfriend, Irene. He appears friendly enough to offer strangers a ride when it's raining.

While time was speeding up due to Made in Heaven, Emporio Alnino defeated Pucci before the universe reset could complete and reverted the universe to the original one but with an altered future. Thus, the souls of Anasui, Jolyne, Jolyne's father, and their deceased allies were reborn but with different memories.[1] Anasui is now named Anakiss and Irene is his girlfriend.

Anakiss and Irene are at a gas station next to Green Dolphin Street Prison when it starts raining. After they see a woman miss her bus, Anakiss offers to give her a ride in exchange for gas and food money. She declines at first but then accepts the offer once she sees a storm is starting. Irene also offers Emporio a ride, explaining they're on their way to meet with Irene's father in order to ask for his approval of her marriage with Anakiss. After Emporio accepts the offer, Anakiss drives them all off. They then see a hitchhiker walking on the side of the road and Irene tells Anakiss to stop the car for him, although Anakiss doesn't want to since their car is already full.[2]

Anakiss is featured in Eyes Heaven as Anasui's alternate costume.