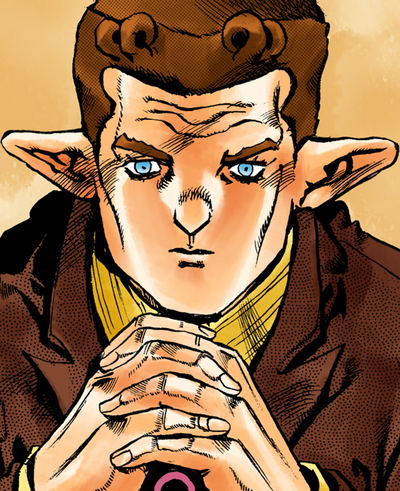 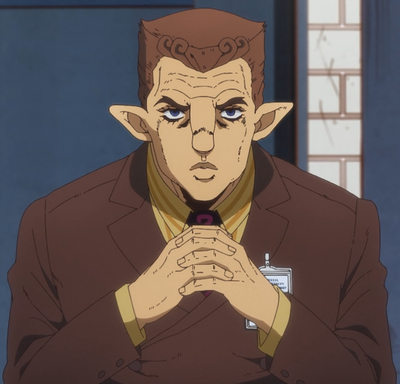 The Corrupt Lawyer (悪徳弁護士, Akutoku Bengoshi) is an unnamed tertiary antagonist featured in the sixth part of the JoJo's Bizarre Adventure series, Stone Ocean. He is Jolyne Cujoh's corrupt defense attorney, who first meets with her in the detention center. After the trial, he is revealed to have been bribed by Romeo Jisso's father and acting under Johngalli A.'s orders.

The lawyer is always dressed in a suit, with his tie having question mark patterns. He has a hairstyle with two curls on each side. Over the course of the story, the lawyer's ears gradually become more pointed.

This unnamed lawyer acts noble in front of Jolyne and expresses regret for not being able to lessen her punishment, but is later revealed to have been feigning compassion, having had no true interest in seeing her free.

In reality, the lawyer is a corrupt and greedy man, as he agreed to sabotage his own defense case because Romeo Jisso's rich father paid him off to have Jolyne condemned. Despite being a defense lawyer, in private, he also despises criminals and even hates "breathing the same air" as them.

The lawyer traps Jolyne to have her condemned by the judge

Hired as Jolyne's defense attorney, the corrupt lawyer first meets her in the detention center. He brings her various items from her mother, including an amulet from Jotaro containing a piece of an Arrow, which awakens her Stand. After she is transferred to Green Dolphin Street Prison, they meet again and he advises her to plead guilty to the hit-and-run charges, telling her that the judge is a good friend of his and would give her a sentence of only 1–2 years if she did so. Jolyne maintains her innocence, but is eventually talked into accepting the plea bargain. However, at the hearing, the judge sentences her to 15 years instead of the promised one or two. The lawyer is revealed to be in the pay of Romeo's father, and congratulates him for being released free of all charges due to Jolyne pleading guilty.

Jolyne gets revenge on the lawyer NSFWTAG

Later, the lawyer visits the prison to submit paperwork and is witnessed by Jolyne, who is infuriated at the sight of him. The man puts on an act in front of Loccobarocco, saying he didn't become a lawyer for the money and feels ashamed of his inability to lessen Jolyne's punishment. Loccobarocco falls for it and tells him that he is a great lawyer and a noble man, before handing him a letter that Jolyne wrote for him. As he reads the letter in his car and begins to get comfortable, Jolyne uses Stone Free's strings to strangle him, causing him to crash on the freeway. He is left impaled by shards of his windshield, bleeding profusely, twitching and gasping for breath. Soon after he's retired, Jotaro reveals to Jolyne that he had been acting under Johngalli A.'s orders to get her falsely imprisoned, making her an easier target to kill.[1]