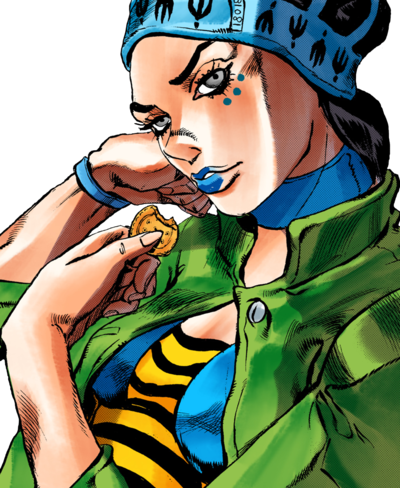 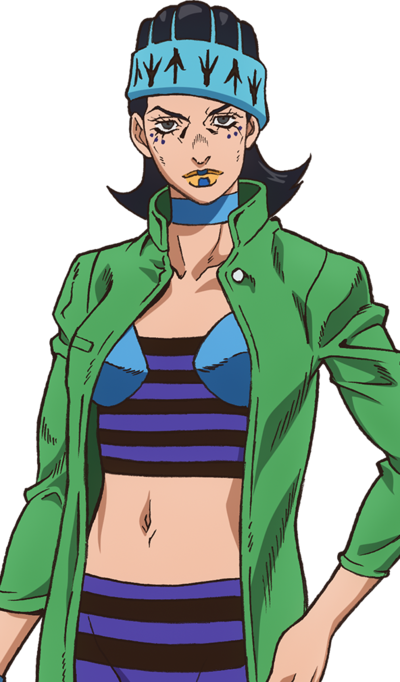 Gwess is introduced as Jolyne's cellmate. She soons decides to shrink the newcomer with her Stand, Goo Goo Dolls, but is defeated and becomes Jolyne's flunky.

Gwess is a young woman of average build and height, with long dark hair over which she wears a headband furnished with a bird feet motif, out from which her hair sticks out, which Araki really likes.[5] She dons three dots under her left eye. Originally, Gwess wears a horizontally striped shirt, often showing her midriff, supported by another layer of clothing over her breasts, over which she wears a typical Green Dolphin Street inmate jacket. Her pants are covered with stripes over her thighs with different colored normal pant legs behind and down to her feet.

Later during Jail House Lock!, Gwess is shown wearing a full body suit, with the same patterns to her previous outfit, and no longer wears her inmate jacket. She also sports a pair of boots, decorated outside the pants by long accessories that are incrementally indented. She also wears a thick collar around her neck. 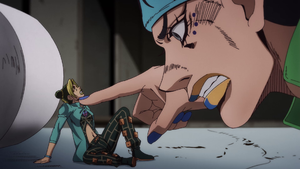 When Gwess meets Jolyne, she greets her and even offers her biscuits, only to suddenly get angry and yell at Jolyne for approaching her bunk bed although there was no indication it was hers.[3] This sudden mood switch sums up Gwess' personality. Gwess will often act kind and friendly, complimenting her interlocutor on multiple occasions. This also applies to the people that she disturbingly turns into her pet.[6][7][8]

Thanks to Goo Goo Dolls's power to shrink people, Gwess has taken to shrinking people and turn them into her pets, using her crushing size advantage to maintain an abusive relationship with them. With her power, she has turned a guard into a "parakeet" and then shrunk Jolyne Cujoh and forced her to act like a mouse. She may act nice and compliment her pets, she is also overbearing and doesn't tolerate defiance. Firstly, Gwess pretends that she and her pet have a relationship of mutual trust and cooperation[9][10] but as soon as her pet behaves out of line, she gets angry and takes it as a grave betrayal from her pet's part.[11][12] She also demands that her pets act cute, such as saying things in a cute way or repeating cute little sentences such as "I love you".[13][14][15] Because she wants to use her pets to escape prison, Gwess also trains them and often orders them to perform dangerous stunts such as jumping from her breast pocket to her shoulder (since given the minuscule size of the shrunken human, any fall would be fatal)[16] and in the case of Jolyne, tried to make her lift crushingly heavy books.[17]

When a pet doesn't faithfully obeys her, Gwess can snap and get extremely angry.[7] At her mildest, she threatens to deprive her pet of food if they fail her, as she did when she gave Jolyne a scouting mission.[18] In general, her mood swings are unpredictable, as while she generally is angry, she can also suddenly declares she likes how her pet shows spirit.[19] At worst, her anger can turn murderous and she sics Goo Goo Dolls on her pet to shred them because she doesn't want them anymore,[9] and throw their corpses in the toilet.[14] 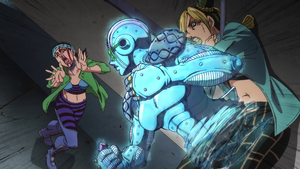 When Jolyne proves stronger than her, Gwess submits to her

Gwess' bio describes her as being cowardly.[20] Indeed, as soon as Jolyne awakens her Stand Stone Free and is able to resist her, Gwess comes to beg for mercy and forgiveness[21] in order to trick Jolyne and set her up to be shot by the guards, all the while gloating about Jolyne's impending death.[22] However, Jolyne beats her up and quickly makes her obey her instead. For the remainder of the part, Gwess is afraid of Jolyne and tries to suck up to her, although Jolyne rejects her attempts at friendship. Gwess does offer sound advice to her about how to be respected in prison.[23]

Prior to meeting Jolyne, Gwess bought a pendant from Ermes Costello. She also acquired her Stand ability Goo Goo Dolls several days before meeting Jolyne and it is unknown if the pendant had something to do with it, though Jolyne later speculates that she must have acquired it the same way she discovered her Stand.[26] Nonetheless, she kept the pendant. After one guard was fired for laziness on the job, Gwess shrunk said guard and hid him in a parrot's skin, making him her pet and training him.

One day, Jolyne finds a piece of erotica that Gwess has left laying between books. Embarrassed, Gwess snatches it from Jolyne's hands and tells Jolyne not to look through her stuff. Jolyne merely says that she has been admiring the quality of the drawing and asks where it comes from. Gwess mentions Fujiko Fujiyama, the inmate from whom Gwess bought her drawing, but her answer is evasive.

Gwess is seen again during the Jail House Lock! story arc. She is disturbed by Jolyne's sudden forgetfulness after she returns from solitary confinement. Jolyne asks about "Miu Miu" and Gwess describes this new prisoner to the best of her ability, although it further confuses Jolyne. At lunch time, Jolyne unwittingly eats Gwess' lunch, especially her favorite cheese-flavored penne. Jolyne apologizes and wants to use her ticket to buy another lunch box but Gwess wisely decides to take the ticket and buy the lunch herself. Still, Jolyne eats Gwess' lunch again behind her back.

Gwess appears in the Green Dolphin Street Prison stage as a stage gimmick. Gwess is actually locked up in a cell, and drops of money appear at random in the stage. The players can pick up the money and give it to Gwess, and she will shrink an enemy. They are slower and take more damage, but can travels through air ducts.