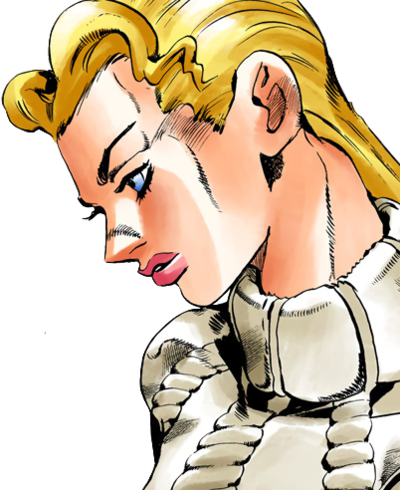 Murdered by a criminal sent by Sports Maxx

SO Chapter 51
SO Chapter 120 (Mentioned only)
SPOILER WARNING: Part 6 spoiler details may follow.
“
Shouldn't you be helping me in the restaurant? You're always just fooling around!
”
—Gloria Costello to Ermes, SO Chapter 51: Kiss of Love and Revenge, Part 1

Gloria was Ermes Costello's sister who ran their family restaraunt. Tragically, she was murdered by Sports Maxx three years prior to the story of Stone Ocean, in 2008. This murder drives Ermes to exact revenge, and she gets herself into the Green Dolphin Street Prison to find Sports Maxx.

Gloria Costello was an average woman with light, slicked-back hair except for two locks at the front, who wore a cropped turtlneck sweater and patterned skirt.

The series is known for alternating colors between media, the information presented below may or may not be canon.
Skin(Fair, pink lipstick)
Hair(Blond)
Eyes(Blue)
Outfit
(Biege cropped turtleneck sweater and a golden, patterned skirt.)

Based on the newspaper that F.F was recalling, Gloria was a strong-willed woman, who inherited her father's restaurant and worked with a steady number of customers. To Ermes, Gloria was seemingly more of a mother-figure than sister as she would regularly lecture Ermes and nag her to work. Gloria had no intention of marrying anyone.

In a tragic series of events, Gloria witnessed a murder committed by Sports Maxx and while she planned to avoid calling the police, needed to, to protect her sister as she was walking by the scene as well.[1]

When Gloria turned twenty, she inherited her Mexican immigrant father's small restaurant in the slums of Florida. Despite being a small restaurant, she had a steady flow of customers.

One day, when the restaurant was closed, Gloria was giving her usual speech to Ermes, lecturing her about not helping out in the restaurant and acting like a delinquent. Being seventeen at the time, Ermes had no interest in helping the restaurant and wanted to get a scholarship in cross-country to go to college. Knowing that mentioning this to Gloria would cause a fight, Ermes decided to run out of the house.

At that moment, in an abandoned back alley behind the restaurant, Gloria heard the groaning of someone near a luxurious car. Upon further inspection, Gloria sees a man tied up on the ground with a gang leader named Sports Maxx standing next to him. Sports Maxx asks the man to bite down on a wooden stick nearby, making sure to prop the stick so it was vertically inserted into his mouth. Sports Maxx then stomps on the man's head, causing the stick to impale his skull and kill him. Gloria reacts to this, but manages to hide behind a wall before Sports Maxx sees her. She wasn't intending to spy on them, and she decided she wouldn't report them either. She felt the best course of action would be to just let whatever happened there handle itself, in order to keep her restaurant safe. Unfortunately, Ermes was still running down the street at the time, and Sports Maxx notices her, assuming that she was going to tell someone about what he did.

Gloria ended up calling the police in order to protect her sister. However, the police had messed up. They claimed that the state of Florida had institutionalized capital punishment and since Sports Maxx was an infamous criminal they had been chasing for a few years, they could use her testimony to get him arrested and protect her family. In order to combat the police, Sports Maxx sent someone else less well known to kill Gloria. She was killed and her body was found in a gutter. She had become famous in the newspapers after the incident. As the only eyewitness was gone, the only thing the police could get Sports Maxx for was tax evasion and inflicting bodily harm, which only sentenced him for five years of prison. After that, Gloria and Ermes's father died soon after, causing Ermes to lose everything: the restaurant and her family.

While Sports Maxx is in Green Dolphin Street Prison, Ermes decides to commit a crime so she can get arrested and get revenge, killing him there during a time where his gang isn't with him and he is completely defenseless.[1]

In prison, Ermes shows a photo of Gloria to Sports Maxx so he would remember her.[3] After a long battle, Ermes succeeds in avenging her, kicking and punching Sports Maxx several times until he dies.[4]