JoJo's Bizarre Adventure: All Star Battle (ジョジョの奇妙な冒険 オールスターバトル, JoJo no Kimyō na Bōken Ōru Sutā Batoru) is a fighting game based on the JoJo's Bizarre Adventure franchise, developed by CyberConnect2 and published by Bandai Namco Entertainment. The game was released exclusively for the PlayStation 3 on August 29, 2013. 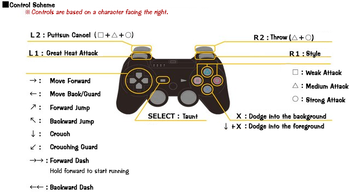 All Star Battle is a one-on-one 2.5D fighting game with 3D cel-shaded characters. Gameplay in All Star Battle shares similarities with JoJo's Bizarre Adventure: Heritage for the Future, and boasts a wide variety of different styles, rules, and abilities among each individual fighter.

Like a typical fighting game, the player wins a round by either draining the opponent's health or by having more health than the opponent when time runs out. Battles can either be one round, the best out of three rounds, or the best out of five rounds.

has three main gauges, although some characters have their own unique gauge as well.

Health: The Health/Stamina gauge displays how much damage a character can receive before being K.O. or Retired.

Guard: The Guard gauge displays how long a character can block incoming attacks before a "Guard Break" occurs, leaving them vulnerable. A Stylish Dodge can be performed by blocking an attack the instant it lands to completely evade it, shown as a character performing a pose while sliding clockwise or counterclockwise of the attacker. It costs a third of the Guard Gauge, but generally gives an opening for a counter-attack.

The HHG builds up when attacking or receiving damage. The opponent's HHG can be decreased by using a taunt when they are knocked down.

Some characters also have extra icons/gauges near the Heart Heat Gauge with different, unique functions.

Each character has a Style button which triggers a specific action depending on their Battle Style (バトルスタイル, Batoru Sutairu). There are 6 Battle Style types:

For example, Jotaro's Style summons his Stand Star Platinum, a signature trait among most with the "Stand" Style. Young Joseph's allows him to utilize the Ripple to charge his Heart Heat Gauge using the ability "Ripple Breath", shared among all "Ripple" Style characters.

The majority of characters have only one Style, excluding DIO (Stand, Vampirism), Old Joseph (Ripple/Hamon, Stand), and Vanilla Ice (Stand, Vampirism). Although Johnny Joestar and Gyro Zeppeli also use Stands, their Style is only Mounted.

Some characters have special attributes and abilities of their own.

There is also an Easy Beat (イージービート, Ījī Bīto) option. By simply pressing the light attack button repeatedly, a character will perform a combo with a Heart Heat Attack at the end.

The Easy Beat almost always follows a combo of "Light attack > Medium attack > Heavy attack > A specific special move/set of special moves from the character's arsenal > Heart Heat Attack (if available and can be comboed into). The only cases where Easy Beat does not end in an HHA is when the character's HHA is not an attack, but rather a special power-up, counter, or delayed throw.

Flash Cancel (プッツンキャンセル, Puttsun Kyānseru, lit. "Strange Cancel") is a special cancel mechanic in the game. It is activated by pressing all three attack buttons simultaneously or inputting the dedicated Flash Cancel button while in the middle of a normal attack or skill. A stock of the Heart Heat Gauge will be spent to make the character immediately and completely stop that attack, marked with a flashing pose as the rest of the screen darkens for an instant.

This gives the player a chance to initiate an HHA (although HHA can often be used instantly in the middle of most attack animations regardless), GHA, string longer combos, or make moves less punishable.

Most Stand Users also have another form of canceling called the Stand Rush. It is performed by pressing the Style button during a compatible special move and spends a quarter to half of the Heart Heat Gauge depending on the move in question.

This will cause the character and their Stand to 'de-sync', allowing player to control the Stand User again before a Stand finishes its attack. While the user may be limited to only their light and medium normal attacks with no special moves available, this opens up opportunities for conjunction attacks, as well as new combos and set-ups.

Much like Heritage for the Future's "Blazing Fists Match", if two attacks of similar properties clash, the two fighters will enter a cinematic minigame called Rush Mode (ラッシュモード, Rasshu Mōdo) featuring them or their Stands dramatically exchanging blows as they shout their Stand Cry.

The players must rapidly push the light button to fill a bar, and the one who fills the bar the most wins the exchange. Characters that can enter Rush Mode are Jonathan, Jotaro, Polnareff, DIO, Josuke, Giorno, Bucciarati, Mista, Narancia, Jolyne, Johnny, and Josuke (JoJolion).

Characters receive an automatic boost in stats when their health is critically low, with the character's health flashing red while in Go Go Go Mode or flashing gold in Resolve Mode.

Resolve Mode (覚悟モード, Kakugo Mōdo, "Preparedness Mode" in the English localization): Activated at 15% health. In addition to the benefits of Rumble Mode, a character will gain super armor during their attacks, allowing them to continue attacking uninterrupted even when hit. Only 5 characters can activate this mode: Giorno, Bruno, Mista, Fugo, and Ermes.

Taunts are emphasized by the battle pausing and the camera closing in on the taunting player. Although the amount lost is insubstantial and regained very easily, it can still be used to prevent an opponent from utilizing a stock or two for a crucial point in time.

There are special taunt attacks that can extend combos but can only be used once per an entire match. Once an opponent is down, specific characters sending out projectile attacks (particularly low-flying ones) or setting a trap must taunt while they are over the target, often requiring a Puttsun Cancel to facilitate. This causes the opponent to get up into said projectiles/trap and be hit without breaking a combo, leaving them open to further attacks. All projectiles pause during taunts and make the taunt attack possible until it actually succeeds. Afterward, they will continue flying or merely cease when the taunt activates.

More taunts can be unlocked in Campaign Mode and set to a character in Customize Mode.

Stage Hazards are activated by someone falling down on a representative series of red (or pink) waves that stem from the hazard and have their paths or areas of effect highlighted on the ground. Some hazards occur continuously in set intervals after they have been triggered, while others only occur once the entire battle. The latter of which often have more severe effects than the former, such as more damage. 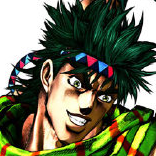 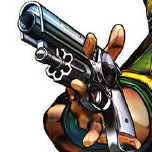 Made In Heaven
Enrico Pucci
From Steel Ball Run