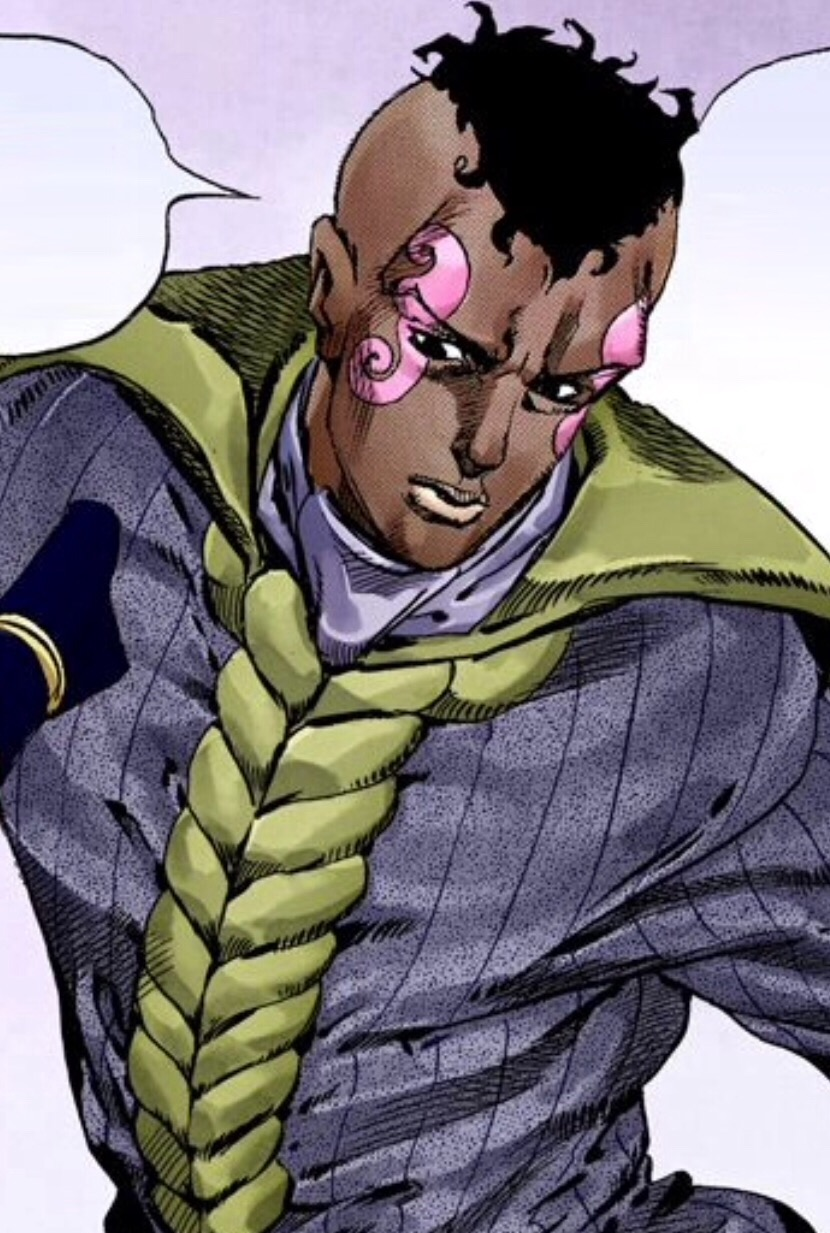 SBR Chapter 50
“
Your sentence to torture is now repealed! Now! Immediately! You are to be executed!
”
—Mike O., SBR Chapter 50: Tubular Bells, Part 3

He is President Funny Valentine's personal bodyguard. When Lucy Steel and Hot Pants infiltrate the President's residence in Chicago, he battles Hot Pants in order to protect Valentine. Mike O. is a Stand User and creates deadly metal balloons through his Tubular Bells.

Mike O. is a dark-skinned man of average to above-average height and medium build. His head is shaved save for a dark, curly patch on his crown; and centered on the edges of both eyes, extending to mid-forehead and covering his cheekbones, he has two light, swerving tattoos tapering at both ends into a spiral.

He wears a heavy overcoat of a thick collar and a sort of thick braid lining the length of his torso; a neatly folded scarf, and pants covered regularly by short spikes.

The series is known for alternating colors between media, the information presented below may or may not be canon.
Skin(Brown, pink facepaint.)
Hair(Black)
Eyes(Magenta)
Outfit
(Blue coat with an olive trim over a periwinkle shirt, blue pants with pink spikes.)

Mike O. is a fairly serious henchman to Funny Valentine. 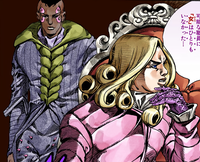 As a security officer, Mike O is highly dedicated to his job. When someone infiltrated a presidential building to intercept a message from Ringo Roadagain, Mike O. has led an exhaustive investigation on the staff and their relatives, making over 1000 detailed files. He takes his duty as a symbol of honor and has commented that finding Hot Pants in the presidential building was a breach that stained this honor.[4] Mike O. was also very distressed when he discovered that the First Lady Scarlet Valentine had died under his watch. On the other hand, Mike O is extremely ruthless toward those that threaten the President. Wrathful about Scarlet Valentine's death, he then decided to kill both Hot Pants and Lucy Steel on the spot as an execution.[5] Likewise, Mike O. requested that he could execute whoever stole Ringo's message.[6]

From the way he conducts his investigation and his attitude during his fight with Hot Pants, he seems to be very intelligent, capable of combining his Stand and surrounding objects to create deadly weapons and strategies.

Mike O. has a small quirk of character in which he repeatedly uses the word "world" (世界, sekai) in all its meanings. He complains by stating his body "is freezing up in this world", asks Diego Brando "how it goes in the world of racing" or theorizes that the person who infiltrates Valentine's government could "be involved in the world of Stand Users".[7]

Mike O.'s Stand is Tubular Bells, with which he blows balloon animals out of metal (often long, iron nails). The balloon animals track and/or invade the body of a target, exploding and reverting suddenly to their metallic form.

Mike O. makes his first appearance when his principles decide it is time for Diego Brando to reveal the traitor's identity. He informs Diego that they acquire more Corpse Parts from Johnny and Gyro and Diego asks if they were killed but Mike O. denies it. Mike O. asks Diego to uphold his end of the bargain and tell them what he knows about the traitor. Resigned, Diego reveals that the traitor is likely a woman weighting 51 kg. Mike O. is skeptical that such a person would be able to ride in the storm in Kansas City but Diego insists on the weight before he leaves. Mike O. reports to Valentine in his residence in Chicago. Valentine has doubts about the traitor being a woman but Mike O. decides to follow this lead, having established a list of all the women related to the staff. The president gives him the task to track down and kill the intruder. Mike O. takes the phone that the traitor had used and creates a little group of balloon-dogs. These dogs memorize the intruder's scent, turning back into nails to be used later. Mike O. hides some in the President's bedroom to protect him. 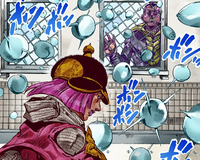 Later, Mike feels that his balloons set up in the President's bedroom have popped. He goes to the building to investigates and looks inside of a bathroom adjacent to the bedroom from the window. He spots Hot Pants. Blowing in the windows, Mike O. turns the surrounding objects into balloons. Hot Pants detaches her hand to spray Mike O. at point-blank range but a metallic shutter cuts it off. At this point, Mike O. feels that his honor as the President's head guard is soiled and plans to capture her to interrogate her. Hot Pants tells Lucy to stay still but it tips off Mike O. about her presence. With another shutter, Mike O. cuts off Hot Pant's other arm and with two more, he destroys a stall, uncovering Lucy and the dead body of Scarlet Valentine. Furious, Mike O. declares that he'll execute the two women on the spot. He steps inside the bathroom through the window but when he blows his nails, Hot Pants' ability triggers and makes his throat and lungs inflate if he tries to blow his weapons. Losing his mind Mike O. still attempts to blow into his nails and his throat explodes.