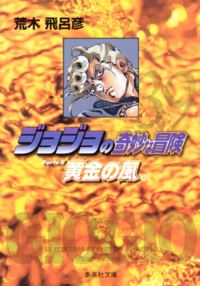 Hirohiko Araki's afterword, written in the final volume of the Bunkoban version of Vento Aureo.

Jotaro Kujo, the protagonist of part three "Stardust Crusaders", sets off on his journey accepting the bond that connects him to his grandfather and his grandfather's great-grandfather (Jonathan's father). There are six generations between them. In that sense, you could say their enemy, Dio Brando, represents both destiny and fate.

I don't think there's anyone who can assert they know anything about an ancestor from six generations prior. From Jotaro's perspective, he doesn't really care if his ancestor was someone who did good things or, rather, someone who made the wrong choices. He simply accepts the blood bond that connects him and his ancenstors, considering it an honor even! While I was writing this fifth part, Vento Aureo, I kept asking myself: "How would someone behave if the mere fact they were born was a source of sadness?"

Men can't choose how they come into the world. Some of them find themselves in happy families, others grow up in terrible places from the get-go. Can those less fortunate do anything if we assume destiny and fate are something already decided by gods or some kind of law that makes stars move in our vast universe? This is Vento Aureo's main theme and both the protagonists and their adversaries need to face it. Giorno, Bucciarati, Fugo, Narancia, Abbacchio, Mista. Every single one of them grew up or rather was forced to grow up, at the edge of society and family. The same can be said about Trish really.

Could they ever challenge fate, destiny, and change them? This was my most recurring thought while working on this story.

I was really down during that period for certain personal matters. What to do? If it were easy for humans to change them just with effort and will, destiny and fate would lose their meanings. It would be too easy. How could the protagonists fight against this sense of unavoidability? The answer, surprisingly, was given to me by the protagonists themselves. They don't try to change their destiny and even in their situation, they choose not to give up their spirit's purity. They firmly believe that happiness and a sense of justice are the same things.

I mean, I'm the author, and yet, while I was writing I ended up learning from my characters and this is what truly gave me courage. In these terms, thinking back, I feel I had the illusion of being accepted among them as a friend, more than just growing fond of Vento Aureo's protagonists myself.

There was one part in this fifth series I absolutely had to delete though. An episode I couldn't write at all. In my head, the story went that between Mista, Narancia, Fugo and Abbacchio, there would be a spy working for the boss and betray Giorno and Bucciarati. At first, I had decided this traitor to be Fugo, but I couldn't do it.

My state of mind was so dark that the stories I wrote were becoming more and more evil, but in my heart, I was starting to hate this behavior as time passed. Also, my heart broke just thinking about how Bucciarati would feel.

I absolutely can't understand betrayal from a trusted friend and this is why just thinking about it physically hurt me. I would have accepted any criticism saying that I "hadn't had the guts to do it" as an author, but I assure you I couldn't write that episode no matter what.

Maybe Giorno would have had to kill Fugo then and I'm sure this would have given a really bad impression to my youngest readers.

This is what lays behind that farewell scene in Venezia, with the publication of Vento Aureo's novel then I was able to have a story written about how Fugo would continue to help his companions from inside the organization.

To conclude, allow me to say something to my characters: Thank you, you are the Golden Wind that blows during the most difficult and sad moments.