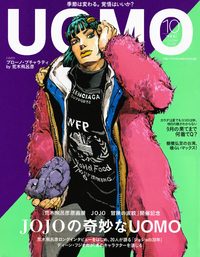 Interview with Hirohiko Araki in UOMO Magazine published on October 10, 2018.

- Next, what is something that scares you?

There are two things, but what scares me in a physical sense is when there's an insect or something in a place it shouldn't be. It's fine when they're in trees or in leaves because that's just nature, but if there was an insect on the ceiling here at the workplace, I'd scream the moment I see it (laughs). The other thing that scares me is to be held responsible for the actions of my ancestors. It's different from a curse or a divine punishment, but it's kind of like why DIO attacks Jotaro. I feel like that type of ancestral karma exists, and I wouldn't want something like that to fall on me. I wouldn't be able to stand it if I got attacked all of a sudden when it's not even my fault (laughs).

- Which character's death made you cry the most?

I guess Shigechi from Part 4 still makes me the saddest. He was a character I liked, so when he died I thought, "Ah..so he's gone?" Even now, he's still my favorite character. That said, I do cry a good amount over other things too. When someone says something really nice, that's enough to make me cry (laughs).

- For those who have yet to read "JoJo", which part would Araki-sensei recommend they read from?

Hmm, which part would I recommend...Well, there are certain aspects of Jotaro that you wouldn't understand if you've never read a part involving DIO, so if you think about it that way, the ideal method would be to read from the very beginning. Still, I wonder if recommending "JoJolion" would be okay? The reason I say this is because the part before it, "Steel Ball Run" started from a blank slate. The names of the characters are only slightly connected, but I essentially reset Steel Ball Run and JoJolion's relationship with Part 1. My intent was to make it understandable even if people never read the previous series. That way anyone coming into contact with the World of "JoJo" for the first time would have a much easier time entering it.
”