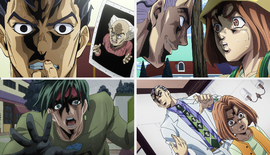 Another One Bites the Dust, Part 1 (アナザーワン バイツァ・ダスト その1, Anazāwan Baitsa Dasuto Sono 1)[1] is the thirty-fifth episode of Diamond is Unbreakable and the one hundred ninth episode of the JoJo's Bizarre Adventure anime. It covers the last two pages of Chapter 417 through the first half of Chapter 421.

The heroes are steadily closing in on Kira, having discovered that the young Hayato Kawajiri's suspicion towards his "father". Kira is seemingly out of option but it is at this moment that the Arrow strikes him.

Kira is impaled by the Arrow

The heroes have accidentally uncovered a clue that could mean that Kira was disguising as Kosaku Kawajiri and Yoshihiro flies to the Kawajiri's to warn his son. Meanwhile, Yoshikage has succumbed to his anger and has killed Hayato. Having barely managed to hide the corpse from Shinobu, Kira then learns that Rohan and the others now have him as one of their suspects. Under such desperate circumstances, Yoshihiro suggests to leave Morioh but Yoshikage vehemently refuses to become a fugitive and lose all hope of a peaceful life. Yoshikage is suddenly impaled by Yoshihiro's Arrow, giving Killer Queen a new ability.

Kira gives himself a new haircut after discovering a new ability

The next morning, Hayato appears alive and well, as if nothing had happened to him the previous night. Shinobu prepares breakfast for him and Kira appears, having made himself a new haircut. More worryingly, Kira has a cheerful and confident attitude contradicting his supposed predicament. When Shinobu accidentally breaks her teapot and gets angry that Hayato hasn't answered the phone, Kira acts the part of a good father and kisses Shinobu on the cheek, frustrating Hayato. When the two go out, Kira openly confesses that thanks to a new ability, he will keep his peaceful life posing as his father forever.

After Kira leaves, Hayato comes across Rohan, who uses Heaven's Door to read his memories. After reading several pages predicting occurrences moments before they happen, Rohan comes across a page revealing Kira's identity. It is at this moment, however, that the third bomb that Kira had implanted in Hayato automatically triggers. Bites the Dust, which is set to kill anyone who learns about Kira's identity through Hayato, allows a miniature Killer Queen to infiltrate Rohan's eye. Killer Queen then makes Rohan explodes in front of him, and Hayato then suddenly finds himself back at his home having breakfast. He thus realizes that time has rewinded. Kira, noticing Hayato's worried look, gloats as one of his enemies must have died.

“
This is the episode where Kosaku awakens Bites the Dust. It's time for it to enter the fray.

The purpose of this episode was to create a feeling of desperation in the viewers by seeing Hayato trapped inside a time loop after Rohan dies. Toshiyuki Kato’s directing is admirable. Just by repeating the same day-to-day scenes and adding subtle modifications, we realize how terrible Bites the Dust can be.

We also paid a great deal of attention to how Rohan exploded. The directing required emotional impact in the instances directly preceding and succeeding the explosion. By insisting too much on the explosion itself, the audience wouldn’t feel the despair and fear. Thus, we focused on Rohan’s pain, so that the audience would feel empathy. During the editing of the episode we even lengthened this particular section.
”
—Naokatsu Tsuda, Blu-Ray limited edition commentaries