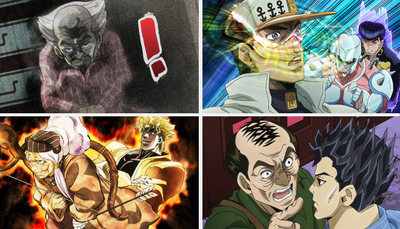 Atom Heart Father (アトム・ハート・ファーザー, Atomu Hāto Fāzā)[1] is the twenty-fifth episode of Diamond is Unbreakable and the ninety-ninth episode of the JoJo's Bizarre Adventure anime. It covers Chapter 365 through Chapter 370 of the manga.

After Kira escapes the heroes and changes his face and identity, they decide to search his house for any potential clue but instead meet with the ghost of Yoshihiro Kira, who is bent on protecting his son at all costs.

In an average house in Morioh lives the apathetic Shinobu Kawajiri and her equally apathetic son Hayato. Shinobu's husband, Kosaku, has always been a very dull man, living life by a very basic routine. One day, however, when Kosaku returns home, he starts cooking dinner for the first time in their marriage.

The serial killer's father, Yoshihiro Kira, inside a polaroid

Meanwhile, Jotaro, Josuke, Koichi, and Okuyasu are at Yoshikage Kira's old home looking for any noteworthy traits that they can use to track him down. However, they only see that Kira made sure not to stand out in his life, and uses the lengths of his nails to divine his good luck when he wants to kill someone. A polaroid camera suddenly snaps a picture of Jotaro and Josuke, strangely containing the image of Kira's late father Yoshihiro sitting behind them. It is the ghost of Yoshihiro who has trapped Jotaro and Josuke with his Stand Atom Heart Father inside the photographed space, and Yoshihiro, able to influence anything from inside the photo, prepares to behead Josuke and Jotaro. However, Jotaro takes a photograph of Yoshihiro alone, which forces the ghost out of the original picture and traps him in the second one, before folding this new photo in two, taping it shut, and tacking it onto the wall. 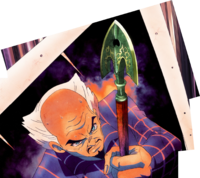 Yoshihiro Kira steals the second Bow and Arrow from Josuke

The gang continues their search, but Yoshihiro manages to bluff Okuyasu into releasing him. Yoshihiro escapes, stealing the second Bow and Arrow from Josuke and fleeing successfully. Jotaro determines that this must have been a different set and deduces that DIO and his assistant Enya must have used multiple arrows to efficiently create a team of powerful henchmen during his reappearance a decade ago. While leaving, Yoshihiro contemplates how even though his son is a killer, he is willing to protect him as long as it makes him happy. 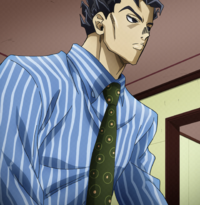 Back at the Kawajiris' place, Shinobu continues to notice her husband changing his lifestyle in many small ways. This soon comes to a head when their landlord shows up, demanding money that Kosaku had been failing to pay for several months. As Shinobu's insists on taking some cash from their safe, Kosaku approaches the landlord and summons Killer Queen, destroys the lock on the landlord's bag, steals his money, then pretends to pay the man upfront with enough money to cover the Kawajiris' debt both now and in the months ahead. Thus Kosaku Kawajiri is revealed to be Yoshikage Kira in disguise, and Kosaku is indirectly revealed to be the man he killed to acquire his look. As the landlord leaves, Shinobu accuses her "husband" of having secretly stolen the money from him prior to today. However, despite this complaint, she finds his new behavior romantic. 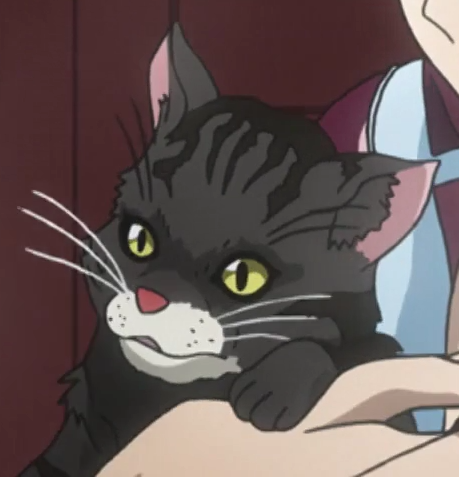 “
In this episode, we’ve changed the way we look at colors. Yuko Sato, the color designer, did a fantastic job with the fight scene against Kira’s father. It’s a motif we end up using for similar scenes in subsequent episodes. It’s funny, I've been working with the same people for quite a long time, yet they still manage to surprise me.

As for the storyboard and the directing, Eri Nagata was in charge of both, much like Episode 18. It's an episode full of small comedic moments, but she’s been great.

Also in this episode, we discover the Kawajiri residence. Many of us at the studio said that it felt like a soap opera. I had to actually ask myself where this series was going when I saw the last scene with Shinobu surrounded by flowers. (laughs).

I had been looking for a long time for how to portray the Stand of Kira’s father on-screen, but I think we’ve reached a satisfying result. I advise our audience to not think too much and to simply feel things out.
”
—Naokatsu Tsuda, Blu-Ray limited edition commentaries