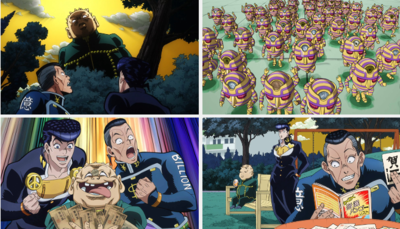 Shigechi's Harvest, Part 1 (｢重ちー｣の その1, "Shigechī" no Hāvesuto Sono Ichi)[1] is the eighteenth episode of Diamond is Unbreakable and the ninety-second episode of the JoJo's Bizarre Adventure anime. It covers Chapter 335 through Chapter 337 of the manga.

Josuke and Okuyasu meet Shigekiyo Yangu, or Shigechi for short, an awkward young boy whose Stand Harvest can collect anything Shigechi tells them to fetch. Josuke senses an opportunity to make money.

Koichi, after the events of the Ghost Alley, is still concerned finding the serial killer that had killed Reimi and many others who's still in Morioh, despairing at how he wishes that he could help them.

Josuke sees an odd Stand with a coin in its hand

Meanwhile, Josuke screams out in shock at his pitifully low funds, even after being repaid by Joseph, cursing himself for getting into this situation. Due to having gone on a shopping spree with his newfound cash, he was too foolish to keep check with his savings. He snaps out of this stupor when he spots a bee-like Stand coming from under one of the bins with a coin of loose change, leading him to chase after it.

As Josuke pursues the Stand, he's soon joined by Okuyasu, who reveals that he's been following that Stand as well. However, unlike Josuke, his reasons were that he was startled by its appearance, spilling the water he had just spent on, much to his anger. They soon discover that there are several more Stands just like the one they're chasing, with Josuke comparing this type of Stand to Bad Company, the Stand of Okuyasu's late brother Keicho.

Shigekiyo "Shigechi" Yangu flaunts the coins he collected with Harvest

The two soon discover the location that they were travelling to, and with that, learn of their Master, Shigekiyo "Shigechi" Yangu. Upon learning how much money Shigechi made just from the loose change, Josuke and Okuyasu strike up a business friendship with him, using Harvest to search for discarded stickers and vouchers that can be exchanged for larger cash rewards. However, Shigechi soon reveals his greedier side, giving Josuke and Okuyasu only a small portion of what was a bigger reward that they were promised, much to Okuyasu's anger.

Josuke later dumps all the lottery tickets they found with Harvest into the bin, with Okuyasu protesting at the action. During his investigation of the tickets, Okuyasu soon finds out that one of the tickets is not only a 5-million yen jackpot but it's still valid for a few more days, much to the delight of both him and Josuke. Unfortunately, Shigechi becomes highly reluctant to share this prize with the two seniors equally.

“
I think this episode is the one that has the most 'acts' in the entirety of the series. Things are constantly moving and nothing will stop these little rogues. Eri Nagata is in charge of the storyboard and the directing and will come back in full force in another following episode.

Shigechi is a funny little guy, don’t you think? I appreciate the sudden change in his facial expressions. We discover him when he’s still a friendless kid, getting accustomed to his new buddies, but his sudden mood swings don’t get better…

We added a scene that wasn’t originally in the manga, the one where Yukako discreetly follows Koichi in the shadows. She won’t have a role until episode 20, so here she is.

This is an episode where we take pleasure in following Josuke and Okuyasu as they assume the roles of 'rotten kids'. These are two high school students profiting from a middle school student, I think there must be something wrong with their education (laughs). Starting from here, the story focuses more and more on the essence of Part 4. But if you had to remember one thing from this episode it would be the outstanding performance of Wataru Takagi, Okuyasu’s voice actor. During the recording, the whole team was laughing out loud.

Here’s a small digression to inform you that Harvest was the only 3D animated Stand of this part. To draw these multiple creatures by hand would have been too much to ask for our team.
”
—Naokatsu Tsuda, Blu-Ray limited edition commentaries