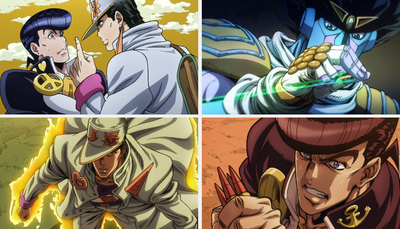 Let's Go Hunting! (「」に行こう！, 'Hantingu' ni Ikō!)[1] is the sixteenth episode of Diamond is Unbreakable and the ninetieth episode of the JoJo's Bizarre Adventure anime. It covers Chapter 325 through Chapter 329 of the manga.

Jotaro enlists Josuke for a peculiar mission: the two must hunt a rat that Akira Otoishi has turned into a Stand User. Their hunt quickly becomes more difficult than they expected.

Jotaro enlists Josuke on a rat hunt, as Otoishi confessed he struck a rat with the Bow and Arrow, which survived and fled.

Beforehand, Jotaro demonstrates to Josuke how to shoot bearings to increase their attack range, Josuke being not quite as precise as Jotaro. Josuke, already quite nervous, is further pressured when Jotaro tells him that if he fails to hit the rat the first time, their hunt will be even more difficult as the rat will stay out of range. The two then head to an irrigation canal where Otoishi said he shot the rat, and investigate the zone while setting up traps and cameras to track the rat. The rat's threat is proved when Josuke discovers a pack of jellified rats. Now sure that the rat has set its nest in the nearby drainage tunnel, Jotaro and Josuke follow it up to a suspiciously empty farm. While Jotaro heads towards another room, Josuke looks into the kitchen and discovers the rat as well as the jellified proprietors. It reveals its Stand Ratt which can shoot darts that can melt even metal but Josuke manages to kill the rat and protect himself, but when Jotaro comes back to Josuke, it is clear that a second rat Stand user is present since Jotaro also encountered a Stand using rat possessing the same power.

Josuke locks his target on Bug-Eaten

After calling the Speedwagon Foundation to confirm that there are only two rats, Jotaro and Josuke proceed to track the second one, going back to the canal where it was caught on tape. Nicknamed Bug-Eaten due to its chewed out ear, the rat apparently ignored the traps and also learned about the bearings, making shooting him more difficult. Jotaro unveils four rifle bullets which will increase their range to 70m and gives two to Josuke. Following the tracks, Jotaro realizes that they've stopped, meaning that Bug-Eaten has gone back on its track and lured them into a kill-zone, hidden somewhere. Josuke is hit by a dart, but Star Platinum stops time and saves him. Having guessed the rat's approximate location, Jotaro decides to act as bait while Josuke will shoot the rat. Yet Josuke isn't confident before the difficult task while Jotaro advances toward Bug-Eaten. As Josuke sees the rodent hidden behind a small rock, it manages to outsmart Jotaro and hit him with Ratt's darts because of a ricochet. Jotaro begins to melt and Josuke shoots, missing the rat by a narrow margin. Bug-Eaten turns its head by reflex toward the danger, making itself a bigger target, which is revealed to be exactly what Josuke planned for. Crazy Diamond flicks a second rifle bullet through Bug-Eaten, killing it. Jotaro remarks that after all, Josuke is a reliable person; the rat hunt is a success.

“
Moving right along, here’s the 'pest control' episode (laughs). Since I particularly love this arc, I was more than motivated to handle the storyboard myself, but it sadly didn’t fit my schedule. Oh well...

Yoriyasu Kogawa was in charge of the storyboard and also the directing. He’s a true veteran and his participation was invaluable to me. This episode proves that I will need to call for him again in the future. Naruhito Sakikawa also handled the key frames by himself, so this really was the episode with the most "solo positions". I can only sympathize with them. It's also maybe the episode with the least JoJo-style directing of the whole series.

Given that it’s an independent story entirely resolved in one episode, the atmosphere is quite different, and it was the ideal occasion to test new approaches. The other members of the team were also very enthusiastic by this little spin-off.

For the record, the design of Jotaro clothes here is exclusive to this episode. I’m taking note of it because I like it a lot, this combination of colors suits him marvelously. The last scene where Josuke finishes off the rat is also extremely cool. Frankly, these two JoJos are a dream team when they fight side by side. Their electrifying dual keeps us in suspense during the episode.
”
—Naokatsu Tsuda, Blu-Ray limited edition commentaries