A summary of Jotaro Kujo's history and movesets in video games.

Jotaro is one of the seven main heroes. His standard attack is a Kick, which can only be used at short-range, and for armor he wears his usual gakuran uniform. For his special attack, he summons Star Platinum and is able to hit distant enemies. Unlike the rest of the heroes, who gain their special attack at level 2, Jotaro is able to use Star Platinum from the start of the game. The final boss of his scenario is an unidentified Stand User.

Jotaro appears in the Stardust Crusaders SFC game, simply titled JoJo's Bizarre Adventure as a note to the game's status as the very first in the series. As the story plays out similarly to Part 3 with a handful of notable differences, the game begins at his household and ends with the final battle against DIO. Jotaro is usually the default on-screen character when out of battles. Most of Jotaro's moves revolve around Star Platinum's "ORAORAORA!" fist barrage, although Star Finger is also used. In this game, Jotaro's time stop ability is a result of the player obtaining and equipping a special cap item on Jotaro as opposed to being an innate ability of Star Platinum.

Jotaro appears as the representative protagonist from the JoJo's Bizarre Adventure franchise to quiz the players about Shonen Jump trivia. 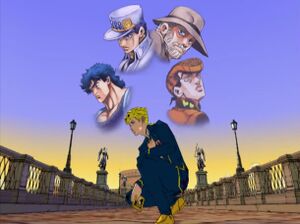 Jotaro in his Part 4 outfit appears in the game's intro along with Jonathan, Josuke and Old Joseph as an image above Giorno, representing Giorno's inherited Joestar spirit. This marks the first time that the Part 4 iteration of Jotaro has appeared in a videogame.

Jotaro and DIO appear as the playable representative characters from the JoJo's Bizarre Adventure franchise.

Jotaro's special attacks consists primarily of his trademark "ORAORAORA!" punches. Many of his Koma include his companions from Part 3, appearing frequently as he performs special attacks. His 4-Koma specials summons Avdol to use Magician's Red's Crossfire Hurricane Special, along with a two-sided barrage from Star Platinum, his 5-Koma specials include him and Polnareff attacking the enemy at the same time as Star Platinum and Silver Chariot cry "ORAORAORA!" and "HORAHORAHORA!" respectively, and Kakyoin and Hierophant Green being summoned to perform an Emerald Splash projectile attack. His 6-Koma specials include stopping time (stopping any movement on-screen for 5 seconds or by the amount of the special bar the player has at the moment) and a lengthy barrage by Star Platinum that sends the opponent flying high and far. Iggy appears as his 2-Koma support, where Jotaro uses Star Platinum to throw Iggy at the enemy, who defends himself by summoning The Fool.

Jotaro returns as a playable character, along with DIO, once again representing the JoJo's Bizarre Adventure franchise. He retains all of his previous attacks and special moves.

Jotaro can now receive an ally boost from Josuke Higashikata, who says he and Jotaro are a great team even in "taro terms", a play on Josukes' "Great!" catchphrase and the usage of Tarot Cards in Part 3, Jolyne Cujoh, by saying she will watch the stars until she meets him and wants to see his starlight, and Yusuke Urameshi (from the series Yu*Yu*Hakusho), by saying "The more fights, the more wins!".

Jotaro also appears in one of the pre-made decks centered around "delinquents" such as Yusuke Urameshi, Maeda Taison (from the Rokudenashi Blues franchise) and Sakuragi Hanamichi (from the Slam Dunk franchise).

While Jotaro does not appear in J-Stars Victory VS, hidden data was found in the game for him and DIO (alongside other Jump characters Yoh from Shaman King and Dai from Dragon Quest: Dai no Daibōken). Jotaro and DIO were both intended to be playable based on their filenames. However, unlike DIO, Jotaro's moveset and character stances were near-completed. This marks the second instance a character was cut from a game in JoJo-related media, Koichi being the first in the PS2 game GioGio's Bizarre Adventure.