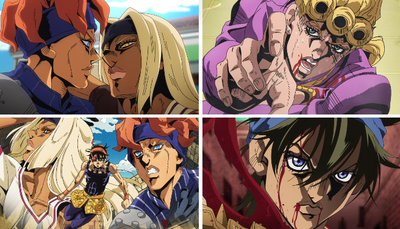 Clash and Talking Head (クラッシュとトーキング・ヘッド, Kurasshu to Tōkingu Heddo)[1] is the twenty third episode of Golden Wind and the one hundred thirty sixth episode of the JoJo's Bizarre Adventure anime. The episode covers from Chapter 528 to Chapter 531 of the original manga.

The fight against Tizzano and Squalo. Giorno has been taken away by Clash and Talking Head prevents Narancia from warning his allies. Somehow, Narancia must find a way to save Giorno before Clash kills him.

Tizzano and Squalo's ambush on Team Bucciarati continues. Thanks to Talking Head, which has forced Narancia to lie and lure Giorno into the bathrooms, Clash was able to appear from a puddle and bite at Giorno's throat.

Narancia summons Aerosmith and tries to shoot, but Clash can teleport faster than the bullets. Nonetheless, Tizzano warns his partner that Aerosmith can detect CO2 coming from Giorno; thus he must completely stop Giorno from breathing. Clash effortlessly evades Aerosmith's shots and baits Narancia into shooting into Giorno and one of the toilets, freeing Clash to head for the sewers. Narancia angrily shouts that he's lost track of the enemy, but Tizzano understands that Narancia means that he's still following Clash. Giorno deliberately let himself get shot by Narancia; the tracer bullets embedded in him are emitting CO2 for Aerosmith. This time, the miniature plane Stand shoots true, managing to wound Clash and force him back to the surface in one of the restaurant's aquariums.

While Bucciarati, Abbacchio, and Mista are still following Moody Blues' replay (stuck since Moody Blues cannot replay a teleportation), Narancia steps into the dining room of the restaurant. Now at a disadvantage with the CO2 coming from Giorno, Squalo tries to warp Clash between bodies of water in the restaurant; however, his injuries have slowed his Stand's movements. Aerosmith lands several more shots as Clash flees to the kitchen, eventually cornering the shark-like Stand near a stove just as Giorno completely stops breathing. Despite his wounds, Squalo taunts Narancia through his Stand; the stove is now leaking gas that would cause an explosion if Aerosmith fires its guns. However, Narancia is unimpressed and sends Aerosmith to ram Clash head-on, cutting the enemy with its propeller before hurling it into a corner of the room.

Narancia loudly declares his victory and calls for his teammates, only to be surprised that he actually said what he was thinking. Tizzano has momentarily deactivated Talking Head's ability, allowing Narancia's shout to lure the rest of the team into the kitchen. Narancia realizes that Mista is about to shoot Clash and tries to warn him about the gas, but Talking Head reactivates and forces Narancia to encourage him instead. When Mista shoots, the gas explodes and throws everyone away, causing a blaze that saturates Narancia's radar. Having been freed from Clash's jaws, Giorno uses his last breath to tell Narancia to chase the User instead of the Stand, giving him a brooch before Clash returns and makes him disappear. It proceeds to attack Team Bucciarati using the puddles of water around the kitchen; with Narancia forced to misdirect them, Mista and Abbacchio are wounded by their assailant. Realizing that he must deal with the enemy on his own, Narancia goes into the street to hunt his foes.

Meanwhile, Squalo and Tizzano have descended from the rooftops, with the former wearing a cloak to hide his serious injuries. Seeing Narancia going in their direction, Squalo fears that their enemy is searching for the ragged breathing of an injured person; Tizzano points out that the many people in the surrounding crowd will throw Narancia off. He points out that Narancia keeps shouting that he's found the enemy; since Talking Head is still active, that must mean that he's lying. Suddenly, the pair see that Narancia is holding his own cut-off tongue at the tip of his knife, using Giorno's transformed brooch as a replacement tongue.

Tizzano and Squalo's covers are blown

Tizzano barely has time to curse Giorno's resourcefulness before Narancia addresses him directly; aware of the sheer number of signals on Aerosmith's radar, he was waiting for someone's breathing to change drastically when they saw him cut out his own tongue. He correctly guessed that the only thing that would cause such a reaction was if the person was the user of the Stand that was messing with his speech; therefore, the person beside Tizzano must be Clash's user. With their cover blown, Tizzano tells Squalo to recall Clash; however, there's no liquid close enough for the Stand to ambush Narancia from.

Free to attack, Narancia has Aerosmith shoot at Squalo, but Tizzano shields him with his own body, collapsing in his partner's arms and splashing Narancia with his blood. With his last breaths, he weakly encourages Squalo to continue the mission, certain that they can still succeed despite things not going according to plan. Enraged by Tizzano's demise, Squalo vows revenge on all of Team Bucciarati - at his orders, Clash bursts out of the blood on Narancia's face and tears into his throat. Undeterred, Narancia sends Aerosmith to push Squalo high into the air, announcing that his entire team will make it out of Venice alive before having his Stand fill its target with bullets. With a final cry of "Volare Via", Clash goes flying out of Narancia as its user plummets to the ground, impotently wondering how the rogue Passione members still have hope before he joins Tizzano in death.

As the onlookers react to the carnage, Narancia recalls Aerosmith and sees Giorno appear by a well in the square. Relieved to see that his ally is still breathing, Narancia internally acknowledges how inspiring and helpful Giorno was during the battle, considering him a major asset to the team.

With their enemies defeated and their wounds healed, Team Bucciarati uses their small window of opportunity to leave Venice and head to an airport. Their next stop is Sardinia.

“
Squalo and Tizzano seemed even closer than how they were depicted in the manga. Listening to the sighs of Tomoaki Maeno and Kenjiro Tsuda made my heart pound! And I have to mention Narancia’s “vola vola” shouts. He managed to win, completely ready to cut off his own tongue. He's definitely matured since the Formaggio battle, and he was very cool.
”
—Sayaka Senbongi, Blu-Ray limited edition commentaries
“
I attach specific concepts and sounds to match the characters in every JoJo's piece I create. This is to fortify the characters' impressions on the viewer from the very moment the music begins to play. Squalo's Clash is shaped like a shark, so I created a melody reminiscent of the movie Jaws. It's shark-y, don't you think?
”
—Yugo Kanno, Blu-Ray limited edition commentaries
“
1. Enthusiasm for Episode Twenty-Three Production

Coordinator Takahashi was elated to be responsible for two of Narancia's main battle episodes, the other being episode eleven. He worked fervently on Squalo and Tizzano's charm and Narancia's “vola vola” scene. “Since this is the only time we get to see Narancia's vola vola, I knew the fans were also excited.”

Takahashi personally asked the animators to put effort into the shot where Tizzano trails his fingers down Squalo's chest. It was also used for the sponsor screen, which made him happy, but also made him laugh. The shot for the sponsor screen is chosen during video editing, so Takahashi muses, "Someone on that team must really love these two!"

3. The Death of Tiziano

Tizzano's death scene is one Takahashi recommends watching over and over. “The animators, and the animation director in particular, worked their butts off to create this scene. I think it's just as beautiful as his death in the manga?

Narancia's signature phrase is voiced quietly and full of power by Daiki Yamashita. Takahashi has only praise for his performance: "Because of the previous games, I had envisioned him shouting this line, but he drew from the manga, which was wonderful. Watching this scene as a fan, I truly thought it turned out amazing.”
”
—Akimasa Takahashi, Blu-Ray limited edition commentaries