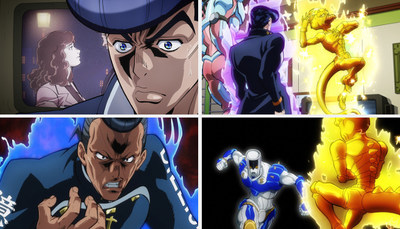 Josuke asks Red Hot Chili Pepper what is it doing in his family room, to which the Stand answers that it's been spying on every known Stand user in town and feels confident enough to take Josuke on. Wanting to test itself before fighting Star Platinum, Red Hot Chili Pepper is still taken by surprise by Crazy Diamond's might but manages to punches Josuke across the room before fleeing to muster more strength. Josuke, having repaired the whole room before Tomoko comes to investigate the ruckus caused by the brief fight, sees how dangerous the enemy Stand is. The next day, Josuke, Jotaro, Koichi and Okuyasu meet in the middle of a deserted field. With Red Hot Chili Pepper being able to sneak through the electrical grid of the entire town and to spy on or assassinate anyone, there is a urge to find the user. Jotaro explains that a certain person able to find him will arrive in Morioh Port at noon and that their protection is a priority since he is old and frail, and his Hermit Purple will be dangerous for the enemy Stand user. Before Koichi and Josuke properly understand who is coming, Okuyasu's motorbike starts up and Red Hot Chili Pepper appears on it, having heard the whole conversation.