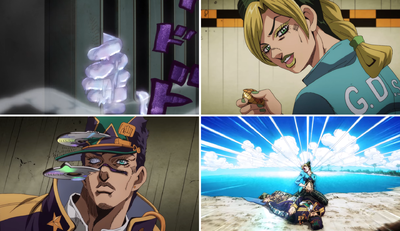 Prisoner of Love (プリズナー・オブ・ラヴ, Purizunā Obu Ravu)[2] is the fifth episode of Stone Ocean and the one-hundred-fifty-seventh episode of the JoJo's Bizarre Adventure anime. The episode covers Chapter 17 to Chapter 20 and a page from Chapter 75 of the original manga.

The father and daughter duo try to escape the visiting room's trap and the prison, but an enemy Stand extracts two DISCs from Jotaro. One holds Star Platinum.

Jolyne has woken up from the dream induced by an unknown enemy into the meeting room, which is covered in a strange acidic goo. Immobilized, she summons Stone Free to push the table down, and it breaks under the pressure and the effect of the acid.

Jotaro finally wakes up from his torpor and sees Jolyne near him. She asks him to break the door with Star Platinum so that they can escape, which Jotaro does. Jolyne then tells him to get her out of the room quickly. However, Jotaro then notices something is wrong. Jolyne has just said out loud his Stand's name, which he never told Jolyne. Jotaro realises that Jolyne knows more than she should and he understands that he's not seeing reality.

Jotaro thus finally wakes up from his torpor, his head wrapped up in Stone Free's thread. He asks if they were both dreaming the same thing, to which Jolyne only answers that she is immobilized. Jotaro questions the reality of what he is seeing again, but Jolyne says that if he feels he can't move, then it must be reality. Jotaro sees that it is Jolyne's Stand that has woken him up and asks Jolyne to fully summon Stone Free again. Jolyne protests because her threads are dissolved by the acid but Jotaro tells her to use the clumped fully shaped form. Jolyne reluctantly summons Stone Free. Jotaro then summons Star Platinum, which violently punches Stone Free. Jolyne and her Stand are sent flying into the door's electronic lock, which opens the door. Crawling out of the meeting room in pain, Jolyne is angered against her father for the sudden punch but nonetheless drags him and the guard out of the room too.

Star Platinum breaks Jolyne out of her handcuffs and she shows the bone to Jotaro, who doesn't really understand what is up with it, but Jolyne is convinced that Emporio Alnino exists. A camera spots Jotaro and Jolyne and the alarm is raised. Jolyne is worried by what could happen to Jotaro, but her father simply assures himself that Jolyne still has the stone pendant, as it is crucial to their escape. Jotaro and Jolyne thus quickly leave the meeting rooms. Unbeknownst to them, an unknown Stand has been observing them. Lamenting that the Joestars have managed to escape its grasp, it quickly disappears.

Jolyne and Jotaro slowly navigate the prison with the help of a map. Jotaro explains that he's borrowed a submarine from the Speedwagon Foundation and acquired a map of Green Dolphin Street Prison, and thus quickly unveils his plan to break Jolyne out of prison. They need to reach a wall of the prison whose windows face the ocean and where the security is scarce. From there they can break out and reach the beach, where the submarine will be hidden waiting for them. Worried, Jolyne jumps at the slightest noise. A strange sounds she's heard turns out to simply be a damaged ceiling fan. Reassured, Jolyne carelessly turns and trips down a set of descending stairs. Jotaro offers his hand and tells her to stick out her hand. Embarrassed yet somewhat glad, Jolyne says that she doesn't need his help but Jotaro then tells her that he didn't mean to help her but check if she has kept the pendant secure. Jolyne's mood darkens and she reminisces the time she's been arrested and yet her father left her and her mother. Snatching the pendant out of Jotaro's hand, she also reminisces the time when she had a fever and believed she was about to die while he was away, or the time she took his car for a joyride and Jotaro said she stole it although he wouldn't use it as he was about to leave the house again for Tokyo. Jolyne then snaps, angrily throwing the pendant back at Jotaro.

Jotaro takes it but is distracted. He too has heard the knock and he says that someone has been quietly following them. Hiding behind the corner and at the base of the stairs, Jotaro and Jolyne see a guard stepping in and signalling that nothing is out of the ordinary. A second guard barges in and points out that the metal door has been bent out of shape. Suddenly, the first guard shoots the second one in the head and slips into the hallway. The JoJos see that it is Johngalli A., who turns out to be real and is pursuing the Joestars. Jotaro steps in, prepared to fight Johngalli A. but he suddenly sees from the corner of his eye Manhattan Transfer. Confused, Jotaro realizes that Manhattan must be real despite him having only seen it in the dream, just as Johngalli A. shoots towards Jolyne. Jotaro stops time and he then sees that there is another Stand behind him. The Joestars are caught in a pincer attack that had been planned up to this moment. Jotaro understands how formidable their true enemy is and that he is their true target. Having no choice, Jotaro decides to bump Jolyne out of the way just before time resumes, and he uses Star Platinum to deflect the bullets. However, the second enemy Stand has already positioned itself right behind Jotaro and it strikes Jotaro. From Jotaro's head come two DISCs.

While the DISCs are extracted from Jotaro, the mysterious Stand called Whitesnake gloats and rejoices as it has managed to steal what it wanted from Jotaro. Jolyne recovers from her fall and when she turns back, she sees Jotaro wobbling out of balance, reclining on a wall. Johngalli A. reappears and shoot at them. She is able to defend herself with Stone Free but Jotaro is strangely unable to block the bullets. Jolyne leaps backwards, bending its bars as Johngalli is forced to reload. She then turns to call Jotaro, but she then catches a glimpse of the true enemy slithering out of sight and carrying a DISC with an image of Star Platinum. Jolyne breaks a window and tells Jotaro to follow her, but Jotaro slowly turns his gaze towards Jolyne and tells her to flee first Jolyne sees that something has happened to Jotaro. As Johngalli approaches, Jotaro has to quickly explains that Johngalli is operating besides another Stand User, and that there is a transmitter in the pendant that'll allow her to call the submarine when she reaches the beach. Slowly losing consciousness, Jotaro confesses he's always cared about Jolyne, shocking her. Jotaro bleeds out from his chest, which Jolyne notices. He tries to play down the severity of his injury but Jolyne understands already that something has been "stolen" from Jotaro, preventing him from using his Stand ability. She thus realises that the enemy has stolen Jotaro's Star Platinum.

Johngalli A. leaps out of the corner and aims at Jolyne, shooting her immediately. However, she effortlessly deflects the bullets by weaving a path made of thread that curves them out of the way from the barrel of the gun to the wall. Astonished by this move, Johngalli tears the thread to shoot Jolyne again but he realises that he's suddenly pointing at a wall. Jolyne has neutralised him by tying his feet with a string and she then makes him spin rapidly to make him lose his balance. Jolyne orders him to stand down. Surprised by her ability, Johngalli complies and lifts his arms in the air, but only to aim at Manhattan Transfer which he hopes will redirect a bullet at Jolyne right when her guard is down. However, Stone Free suddenly punches him. Jolyne, with a yet unsuspected determination in her eyes, pummels Johngalli A. and sends him flying into a wall. Having witnessed that, Jotaro feels reassured and is sure that Jolyne will survive any ordeal, before he loses consciousness.

While the guards have been deployed with attack dogs and shotguns with permission to use lethal force, Jolyne drags Jotaro out to the beach, commenting that the Speedwagon Foundation seems formidable to have unmanned submarines available and hopes that they will be able to treat his wounds. As they reach the water, Jolyne can see the submarine emerging from the water. However, Jolyne is horrified when she sees that Jotaro can't even react when he's being submerged underwater and she quickly lifts him out. Examining Jotaro, Jolyne realises that something is deeply wrong with Jotaro, his shallow bullet wound being not enough to explain his condition. Worse, Jotaro's heart seems to have stopped beating and she can't restart it. Helpless, Jolyne howls out of grief and rage. The attack dogs have found Jolyne and rabidly try to attack her from the other side of the fence.

A pair of guard who were following the attack dogs approach the beach, ready to shoot the prison escapees. Jolyne suddenly reveals herself, surrendering to the guards. One of them aims at her but his companion stops him, saying that Jolyne has surrendered. They both leave to find Jotaro. At the same time, Jolyne has deployed a thread right back to the prison, with which she's managed to contact Emporio again. Using the thread's vibration, Emporio asks Jolyne why she's decided to stay at Dolphin Street, but she declares that she must uncover the killer lurking inside of the prison. Telling what she saw of the enemy, Jolyne feels like the killer belongs inside of the prison and she declares her intention to retrieve the DISCs that were stolen from Jotaro. Emporio feels no hope for Jolyne's goal to save her father, explaining that his mother, who gave birth to him in prison, also fell victim from Whitesnake and that her bone is the only thing that has remained from her. Emporio formally presents itself and explains that he was born in prison and lived all his life there. Jolyne thanks Emporio for his assistance. However, Jolyne is still determined and clings on the hope that Jotaro is not yet dead but merely frozen. She then asks Emporio to collaborate with her to unmask the culprit and find the DISCs.

Meanwhile, Johngalli A. lays on the ground, severely wounded. He senses Whitesnake approaching and is glad to see that they've managed to steal the powerful Star Platinum. He asks Whitesnake to bring him back to the men's ward but then Whitesnake takes his gun and kills him, placing the gun next to his corpse to frame the now deceased Johngalli A. Whitesnake has thus acquired two DISCs from Jotaro.