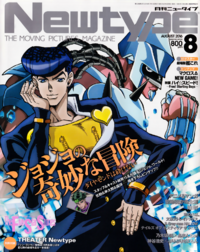 Interview with Darren Stanley Hayes, frontman and singer of the pop duo Savage Garden. Published in the August 2016 issue of the Newtype magazine, released on July 9, 2016.[1]

Had you heard of this manga "JoJo's Bizarre Adventure" before? If yes, please tell us how you came to know of it.

I was aware that JoJo's was considered to be the coolest anime in Japan. I have many friends who love comics, anime and the show but I admit I had never watched it before! When the request came through, I did of course watch some episodes and I immediately knew the show was lovingly made and clearly adored by millions.

What did you think of your hit "I Want You" being chosen as the ending theme for the TV anime of "JoJo's Bizarre Adventure?"

I was very touched by the fact that the creator of the show had been fond of the song "I Want You" and 'Savage Garden'. When I confirmed the news on twitter, my timeline literally blew up and I was swamped with kind messages of support and welcome from the JoJo community. The last thing I wanted was for fans of the show to think the song didn't fit or wasn't appropriate. So to see the positive response, I felt very grateful.

The Part 4 episodes of "JoJo's Bizarre Adventure" (currently aired in Japan) are set in the year 1999, fairly close to the time "I Want You" first became an international hit. Can you share some memories from around that time?

1996 to 2002 was a roller coaster. In the music industry, this was a time of great excess. The entire Savage Garden period was part of a golden time in music where sales were thriving, music videos were high budget and extravagant and I loved very single minute of it. The fashion, the experimentation and the excitement of radio back then was so electric. I am proud to have been part of that period.

There's been an increased buzz for Savage Garden now that people are hearing "I Want You" on the broadcast of the latest "JoJo's Bizarre Adventure: Diamond is Unbreakable." What is your impression of the reaction from fans?

It's a privilege to reconnect with older fans and meet new fans who were just children when Savage Garden songs were on the radio. I'm meeting fans in their 20's who remember buying our music as their first album. Especially in Japan, the reaction to Savage Garden in the 90's was very special to me. I remember playing some incredible shows to the most gracious and enthusiastic audiences. I still remember my Japanese fans to this day.

The creator of the JoJo series has been a long time fan of Savage Garden and he is thrilled to have "I Want You" on his latest anime series. Any thoughts on the loyalty of your fans and it leading to your track being reintroduced in a brand-new anime project?

I'm just very appreciative that the music has occupied a very special place in people's lives. I absolutely love the repackaged cover of the album featuring JoJo artwork - it's incredibly cool! Such an honor.

Please give us a message for our Japanese fans.

Thank you for remembering me, our band and our music. My time in Japan was amongst the most magical of my adventures in the music industry. I have fond memories of cheery blossoms, tiny Starbucks cups, incredibly thoughtful gifts, amazing food and an outpouring of love. I love Japan and our Japanese fans and I always will.