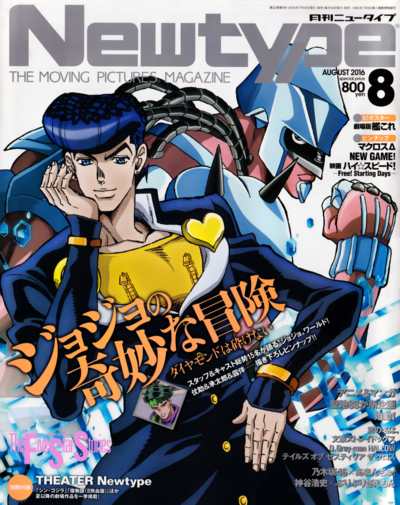 Newtype (ニュータイプ, Nyūtaipu) is a Japanese monthly magazine published by Kadokawa Shoten that mostly covers anime, manga, and video games. It was first published on March 8, 1985.

Newtype specializes in releasing content related to the anime, manga, tokusatsu and video game industry. Its content can be divided in five types. Firstly, Newtype runs several columns written by creator within the anime and manga industry. Secondly, the magazine publishes within its page several manga series, and is best known for serializing The Five Star Stories by Mamoru Nagano. Thirdly, it also contains serialized light novels and novelizations of other shows. Fourthly, the magazine contains a television schedule related to animes and tokusatsus on several Japanese networks for the coming month, accompanied with synopses and network ratings for each show from the previous month. Finally, Newtype publishes a tip column aimed at helping working with computer graphics, in manga-style illustations. This column is written by different guest illustrators each months. Newtype also publishes one or several illustrations from known anime illustrators.

The magazine also has its own award, the Newtype Anime Awards, which is meant to highlight the best of what was made in the previous year within the entertainment industry, having categories such as Best TV Anime, Best Director or Best Actress. The selection process is done by popular vote with questionnaire postcards and online voting.

Newtype was releases as a large-format magazine which incorporated information on music and live-action movies, which was innovative at the type and made it stand out as a magazine. The first issue was released in parallel with the start of Mobile Suit Zeta Gundam and with many tie-in to the anime. It quickly performed well in sales and topped the former top anime magazine of the time, Animage.

Its success continued in the mid-90s as it published content about Neon Genesis Evanglion. At the time, the magazine registered a record high of 400,000 copies sold.[1] It influenced other magazines who began to follow its format.

A North-American version of the magazine named Newtype USA was released on November 2002, with a majority of articles translated from Japanese but also with the participation of American content creators. However, the sales disappointed in the United States, with numbers of copies sold varying from 50,000 to 70,000. Newtype USA was discontinued on February 2008. Newtype Korea continues to be released.