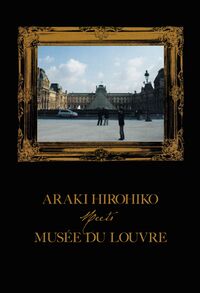 An interview with Hirohiko Araki included in the Japanese hardcover edition of Rohan at the Louvre, titled ARAKI HIROHIKO Meets MUSÉE DU LOUVRE, that was released on May 31, 2011.

Firstly, please tell us how you came about getting involved in this project?

Araki: It all started because of a conversation I had with Akiya Takahashi (the founding director of the Mitsubishi Ichigokan Museum) while I was helping him with his "Musée d'Orsay" exihibition ("Musée d'Orsay: A 19th Century Artists' Paradise" which was held in 2007). He told me that he had heard about the offer through a newspaper company, which is how I got involved.

What were your thoughts when you first heard about the offer from the Louvre?

Araki: I felt honored, but at the same time it felt too good to be true. (laughs) I was like, "Really, the Louvre?" (laughs) Japanese manga is not something that comes to mind when you think of the Louvre. But when I found out the offer was true, I felt honored. I'm also grateful to all the people at the papers who acted as my intermediary, even though they really had no incentive to.

This is your first work in full-color. Was that something you planned from the beginning?

Araki: I heard that the other authors involved in the project were doing full-color, so I figured I might as well do it too.

When Fabrice, the project manager, visited to Japan to see your black and white manuscripts for Steel ball Run, he said: "It has a certain appeal that's impossible to ignore. If you want to push the Japanese style of making comics, I think it would be great if you drew it in black and white."

Araki: Thank you. That was definitely an option, but since opportunities like this don't come by very often, I decided it would be a nice change of pace to do it in full-color.

The illustration on the cover is very impactful, don't you think?

Araki: The cover uses the three colors that symbolize France: white, red, and blue. Most old Japanese paintings feature a motif of clouds and waves, so I included a wavy pattern to give it a Japanese touch.

The colors in the story are a lot more subdued compared to the cover, aren't they?

Araki: I figured that if I used my usual coloring method for the entire story, the readers would get tired of it, and that would be bad. So I decided to keep a balance that would encourage the readers to keep reading. I was given several French comic books to use as reference, such as works from Nicolas de Crécy and etc., which I studied to get a sense for drawing in full-color.

The story first takes place in Japan, then the Louvre, and lastly underground.

Araki: That's right. The first part is the most Japanese as it takes place in Japan, and since it's in the past, it has a sepia tone. I was very conscious of what tones I should use for stuff like Tatami mats. Once we arrive in Paris, it's pink, and down in the underground, it's blue. I did the first undercoat of paint the same for all parts of the story, and then later decided to split them into different colors.

In the book, we get to see a lot of Japanese things, such as traditional Japanese houses and yukatas (summer kimonos).

Araki: I intentionally did this with French readers in mind. I don't usually get to draw these type of things, so it was very refreshing and enjoyable.

The main character is Rohan Kishibe, a manga artist from Part 4. Did you plan to have Rohan as the protagonist from the start?

Araki: Well, I was actually asked to create a new character, and not one from JoJo. But I knew from the very beginning that the story would feature a manga artist like Rohan going to the Louvre. So I thought, why don't I just use him? (laughs)

The combination of the Louvre and Rohan must've been a perfect match For Japanese readers.

Araki: Besides, had I created a new character from scratch, it would've taken a dozen pages in order to properly introduce them, and that would've made it a lot more difficult for readers to jump into the story. Also, if an author writes a character they're familiar with, they can more easily present them to readers who have no idea who they are, like Rohan. I consulted this with the guys at the Louvre and managed to get them to approve it.

So you had some idea of what the plot was going to be from beginning?

Araki: That's right. It was something along the lines of Rohan pursuing a mystery in the Louvre... But the Louvre is a pretty big place, so I had to narrow down the places I wanted to show. I thought it would be cool to have a shady looking underground area, and during the investigation, Rohan would be shown going down into it from the upper floors.

At the time, I was very curious where all the paintings not put on display were stored. There are many masterpieces that are either not in perfect condition or are undergoing restoration that can't be shown to the public. This made me wonder if something like the "black painting" in the story could be kept there.

The Rohan we see pursuing the painting is a bit different from his eccentric self in Part 4. It was also very interesting seeing Rohan before his debut as a manga artist.

Rohan's first love was also never shown before, but we get to see her in the story.

The story features a lot of poses, such as in the spread where Rohan arrives at the Louvre.

Araki: That pose was taken from Michelangelo's "Dying Slave" sculpture. Since the Louvre is the main focus of the book, I tried paying homage to many of the works in its collection. The scene where Rohan tries to read Nanase's memories is also inspired by Antonio Canova's sculpture "Psyche Revived by Cupid's Kiss." I added more references here and there, so I would be pleased if you tried looking for them all.

How did you feel exhibiting your works in front of French comics for the first time?

Araki: As one of the few Japanese artists presenting their works, I felt that I had to give it a distinct Japanese look. That's why I came up with the story of it taking place in Japan and going to the Louvre, connecting the two places.

What were some of the differences you found between French comics and manga?

Araki: The most obvious one is how the cover illustrations are presented. I was surprised when the Louvre asked me to draw mainly landscape artworks. When I looked at other works, I saw that they were mostly draw wide with the characters small. This is the exact opposite of the methodologies used in Japanese manga.

What do you think are some of the characteristics of French comics?

Araki: I think it's the pursuit of drawing something in a way that's never been done before. In the case of Japanese manga, the goal is to draw something that's accepted by the readers, but French comics ignore this and go in the total opposite direction. It's very liberating, and forces you to go out and draw your own way. That's what differentiates it from Japanese manga.

Did your impression of the Louvre change after the exhibit?

Not at all. I keep wondering if there are hidden passages behind the walls, despite having been behind the scenes. After all, the Louvre is still the Louvre.

How do you feel about having your paintings exhibited in the Louvre?

Araki: I'm in awe. (laughs) The Louvre is a place that even Gauguin and Picasso couldn't get into, because it only exhibits pre-modern works. It's truly an honor to have my art exhibited in the same place as the Mona Lisa and the Venus de Milo.