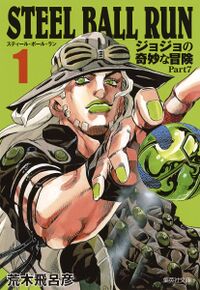 Hirohiko Araki's afterword, written in the first volume of the Bunkoban version of Steel Ball Run on February 17, 2017.

In 2004, I started drawing JoJo's Bizarre Adventure: Part 7 “Steel Ball Run”. This was the story of Johnny Joestar and Gyro Zeppeli and their participation in the great race throughout the North American continent, going from San Diego on the West Coast to New York on the East Coast. I'd like to now share with you all some memories regarding the genesis of this work.

Part 1: The Protagonists
Each one of them has their own family problems: Johnny's relationship with his dad and Gyro's lineage. It's almost as if their births are a contradiction and their desire to take control of their lives pushed them to enter the race. The other characters have a positive attitude as well and those who hide the power of a Stand are very confident in themselves. That being said, maintaining a positive attitude is a tiresome way to live life. After all, to find a bit of peace they only have 2 choices: retire from the race or reach New York.

Part 2: The Stands
Up until now, I've created Stands with the intent of visually representing elements which are impossible to perceive with earthly eyes yet still very much exist. This includes all physical phenomenons and creations, stuff like transforming flames into characters or drawing time itself. With my previous work "Stone Ocean," I had accomplished a certain sense of fulfillment and was wondering, "What I should do next?" When I started drawing SBR, I had a predilection for rotations (specifically spiral rotations). The flames that I designed resembled whirlwinds, splashing water flew like vortexes, body joints bent as if screwed together, hair grew in a sinuous way, the branches of plants and trees connected curved into the main stem, petals of flowers were like spirals, the shadows of rocks seemed like they were rotating, etc.. By constantly drawing things like these, I reached the conclusion that rotations and spirals gave a clear explanation to every phenomenon in this world of ours. Had I made a Stand out of them it probably would have been extremely powerful. Additionally, by connecting the concept of "rotation" to "rebirth," then ideally the story would return to its starting point. It's through this reasoning that I convinced myself that SBR had to be set in the same time period as Part 1, that being the end of the XIX century.

Part 3: Research
I love stories in which characters grow throughout a journey and I believe tends to be a universal experience. These days, you can obtain information on anything you need through searching on the internet, and as a result research trips are no longer necessary. However, there are places where its necessary to be there in person, in order to really perceive their magnitude. To truly comprehend the other side of the coin, we must live in these places to experience their miseries and inequities, and understand what would happen if, for example, we were to find ourselves without milk. Pushed by the desire to experiment with these sentiments, I went on a discovery trip on a Cessna and in a car starting from a desert in the Far West. It wasn't necessarily related to SBR, but I was particularly fascinated by the abandoned crash sites of planes right in the middle of nowhere.

Later on, I hiked for 5 days and 4 nights in the mountains of Kumano Kodo (a group of ancient pilgrimage footpaths, patrimony of UNESCO since 2004) in the prefecture of Wakayama in Japan. I wanted to find out what would happen to me if I walked 20 kilometers every day, and so I did. Maybe this experience in particular has some relevance to SBR. Everyday, the marvelous view offered by the forests would become increasingly darker after 4 o'clock, more than you could imagine. One day I happened to see an old lady all alone, coming out of the dark and saying "If I hadn't met that kid I would have certainly been lost and I would have been in trouble!" (what kid was she talking about?!). After 2 days of walking my muscles started to hurt a lot, the phone had no signal and it seemed so heavy that each day I would ponder the idea of just throwing it away. The contradictions of useless inventions.

Part 4: The Enemies
President Valentine, who appears in the second half of SBR is the final boss, the worst enemy, the big bad, an extremely evil person. However, I would like to explain why he is a villain from the POV of the protagonists, Johnny and Gyro. President Valentine uses the Steel Ball Run race to collect the treasures necessary to transform his native country into the greatest and biggest nation in the world and to steer it towards a new era. Basically, through this event, he plans to conquer the sympathy of the people and obtain the rights for his fellow countrymen. He is aware that the future will bring forth the movement from horses to machines, and knows that democracy means the acquisition of the rights of a capitalist economy. That being said, a person who doesn't know egoism is truly terrifying. In practice, the ideas of President Valentine are much more valid than those of our protagonists Johnny, Gyro, Steven Steel, etc.. As a result, this president who wants to follow the rightful path is the antagonist by 'antonomasia'. In him resides the contradiction that exists between good and evil. It's sort of a paradox. However it may be, what is happiness? If happiness coincided with the victory of truth, then would it have to be the objective of this era? In the end, will Johnny and Gyro really be able to achieve it?

Part 5: Area
The publication of this work switched from Weekly Shonen Jump to the monthly Ultra Jump, not just because after many years the weekly deadlines began to feel stressing, but also because I felt that in SBR the "area" which I could draw had grew a lot (I'm referring to the number of pages per chapter). I sensed that I could improve on the proportions between backgrounds and characters and also felt that I had found an ideal rhythm to develop this manga which, by its nature, is more suited to being monthly.

Other languages:
English • português do Brasil
Retrieved from "https://jojowiki.com/index.php?title=Interview:Steel_Ball_Run_Bunko_Vol._1_(February_2017)&oldid=744241"
Categories: