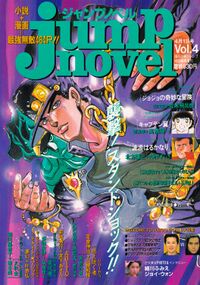 An interview between Kenji Ohtsuki and Hirohiko Araki from the Jump Novel magazine, published on April 1, 1993.[1]

Two men with unique abilities meet in the faint light of a candle… One is Araki Hirohiko. The other Ohtsuki Kenji. The shocking bizarre talk starts now…

Ohtsuki: The first time I read Jojo I just thought “Woow, this inspires me, I’ve got to do this too, I really have to~”. I’m a musician, I have a band, but I also write books. I figured that if I was going to write for a magazine, I would have to focus, so I shut myself in the house and wrote and wrote for four days, but in the end…! I just couldn’t do it. I play in a band, act in movies, show up on TV. I do all kinds of things, but I feel most at home with my band. It was too hard for me to write a story.

Araki: But, you see, this is precisely that wall you hit at some point. You may think it’s hard, but you will enjoy it so much once you go beyond it.

Ohtsuki: Then I happened to read Jojo at that moment and went “hmmm”.

Araki: You see, I actually take a lot of hints from songs and the like.

Ohtsuki: I was just thinking that Dio’s name, for example, comes from Ronnie James Dio, or that Jojo is the Jojo in “Get Back”.

Araki: That’s right. There are a lot of examples. This horror element of rock music got to me ever since I was a child. I started listening to it in the 70s. Before that, album covers usually featured the artist, but then in the 1970s all kinds of demonic stuff started appearing on the jackets, like in the case of Marc Bolan or King Crimson. The titles were also something along the lines of “Highway to Hell”, and I can’t tell exactly why, but there was something about them that instinctively appealed to me. I guess I bought the albums more for the cover than for the actual music.

Ohtsuki: Same here, I also bought them for the covers.

Ohtsuki: Which side are you on when you write Jojo? The bad guys, right?

Araki: Ah, well, I generally get attached to everyone when I’m writing, but I also enjoy the bad guys from time to time. I may be considered a freak for saying this, I’m afraid, but I pursue the abnormal, like murderers and so on.

Ohtsuki: I see. You also had Jack the Ripper show up in your manga.

Ohtsuki: Speaking of which, there was this big incident last year that made me think “Wow, it’s happening~”… One of those modern shamans said they would drive the demons out of a person and beat them up until they killed them.

Araki: I heard about that. It really did happen, huh.

Araki: I generally try to write Jojo as not completely steeped in the occult, but somewhere on the borderline; close to the other world, but not completely. For example, I prefer writing about the uncertainty and fear you feel when you wonder if there’s someone behind that door.

Ohtsuki: Behind that door?

Araki: Exactly. Don’t you find it scary when a curtain behind a window moves just a little?

Ohtsuki: Ikariya Chousuke is behind it (laughs). If I were to think there’s someone behind it, I’d just fully open it and bam! Chou-san would be there and go “Wooh”. (everyone laughs)

Araki: Still, you need this sort of unpredictability when you are writing a story.

Ohtsuki: You know, I didn’t believe in aliens before, but at one point I read Minamiyama Hiroshi’s books and wham! it dawned upon me. I’ve been obsessed with UFOs ever since.

Araki: That photo with the pyramids on Mars took me by surprise.

Ohtsuki: Oh yes, that one. That’s a funny one.

Araki: Is it edited?

Ohtsuki: It’s edited or, how should I put it, it’s more like spirit photography or those rocks that resemble human faces. There is this self-styled science journalist named K who claims the Moon is actually a secret base for UFOs and traces letters on all kinds of photos with the Moon craters, saying how many UFOs are in which craters, or pointing out where certain hideouts are. You do tend to believe you see what you’re told to see, but those blurry pictures of rocks simply make you think they resemble faces. That was what I meant.

Ohtsuki: There are people who turn completely paranoid, overthink things and simply get lost in their own world. Especially writers. I was a bit afraid you might be like that too.

Araki: I have betrayed your expectations (laughs).

Ohtsuki: No, no, this is actually a good thing. I was worried what to say if you said “Dio visited me again this morning”. There really are people like this, you know. For example, there is this anime adaptation, Genma Taisen, written by H. It’s amazing how that person seems to be going more and more off the rails.

Ohtsuki: He wrote Wolf Guy, which I really love, but apparently he always felt like the protagonist actually existed somehow. So, one day someone calling themselves by the protagonist’s name showed up at his door. He looked nothing like Inugami, he was just a normal middle-aged guy. At first, H thought he was some random paranoid guy, but still talked to him because he was afraid something might happen…and in the meantime, he came to believe he was the real thing. The scariest part is that they are talking in the presence of a magazine editor (laughs)

Araki: So, up until now he has…err…been writing while telepathically communicating with that person.

Ohtsuki: Yes. I told that story to S, an acquaintance who researches UFOs. He replied that he had been collecting material about psychic abilities as H’s advisor, had met that Inugami person and had even gotten an autograph (laughs). He showed it to me and it did say “Inugami”. What would you do if one day Jojo came to your house?

Araki: The story you just told me feels so real.

Ohtsuki: It won’t be long before Jojo visits you.

Araki: I love Inugami too, so I feel like he actually exists.

Ohtsuki: You do end up feeling like that, huh. Also, what’s amazing is that…

We apologise, but the following content was too extreme, so it could not be reproduced.

Ohtsuki: Maybe I will also become a writer visited by the protagonist of the story he wrote a few years back.

Araki: I also have people asking me how come I know about hamon, because they were already practising it.

Ohtsuki: See? You will be visited by a Jojo in a few years’ time.

Araki: I will introduce them to you when the time comes.

Ohtsuki: Is Jojo going to get an anime?

Araki: There’s one out right now.

Ohtsuki: Is it airing already?

Araki: It’s on video. I like the scenario. I didn’t write it, but it feels like I actually did…

Ohtsuki: Then I’m going to watch it.

Ohtsuki: What do you think about the voices?

Araki: I don’t worry about them at all. It would be a bit weird if a man voiced a woman though.

Ohtsuki: That would be odd.

Araki: Or if Jojo had Lupin III’s or Sazae-san’s voice.

Ohtsuki: But that would be nice. Really nice. Imagine if Dio said “Useless useless useless” in Masuo’s voice.

Ohtsuki: Ok, that kind of unexpected casting is just…

Araki: It’s fine, but it would end up as a cult work.

Araki: It would be nice if voice imitators did it too.

Ohtsuki: Oh, there’s someone who really sounds like that. Someone who imitates Hirokawa Taichirou as Lupin III’s voice. It is such a strange thing to encounter in daily life, above all else. What if you turned on the TV one day and Lupin III’s voice were completely different!

Araki: That would be quite something.

Ohtsuki: One billion people would faint in front of the TV if he had the same voice as Hoshi Ittetsu.

Araki: The phone lines would be on fire.

Ohtsuki: I want to see this for Sazae-san’s Ooyama Nobuyo too. I would actually love to write this kind of story one day.

Araki: I am sure you can do it.

Now, one final message for the readers…

Ohtsuki: I am releasing an album titled “UFOs to koibito” in April. It make me happy if you bought one copy… I am also very serious about writing a story, whether it takes me ten or twenty years. It might end up as a novel or a movie though.

Araki: I see. I know this sounds cliche, but let’s do our best. Disregarding the anime, Jojo also has a Famicom game and a novel. Nevertheless, I want to make the manga interesting enough so it won’t lose to either of them.

Thank you for today.