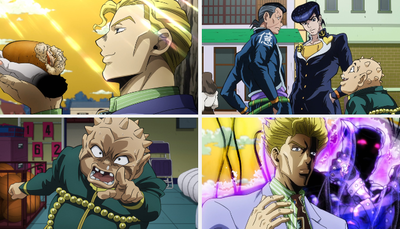 Yoshikage Kira Just Wants to Live Quietly, Part 1 (吉良吉影は静かに暮らしたい その1, Kira Yoshikage wa Shizuka ni Kurashitai Sono 1)[1] is the twenty-first episode of Diamond is Unbreakable and the ninety-fifth episode of the JoJo's Bizarre Adventure anime. It covers Chapter 342 through the first half of Chapter 345 of the manga.

The serial-killer Yoshikage Kira's peaceful day is thrown into disarray when Shigechi accidentally takes his lunch bag. In the bag is the hand of his latest victim and Kira must retrieve it to conserve his anonimity.

On a sunny day in Morioh, salaryman and secret serial killer Yoshikage Kira is relaxing at home with his "girlfriend," a severed hand from a woman he previously murdered. He gives his "girlfriend" a ring he bought for her before heading to St. Gentleman's Bakery to buy a sandwich. Along the way, he is greeted by several of his female coworkers asking him to join them for lunch. Kira refuses, while another male coworker describes how Kira seems to keep to himself and how quietly he acts.

Yoshikage Kira enjoys a quiet day by himself

After buying a sandwich, Kira sits under a tree at the park to eat it, contemplating the beauty of Morioh. Just then, right behind the tree, Shigechi meets up with Josuke and Okuyasu and is asked to loan them lunch money. While giving them the money they need, a stray dog steals Shigechi's lunch bag (also a sandwich from St. Gentleman's) from under his nose and runs off. When Shigechi notices that his sandwich is gone, he mistakes Kira's bag for his and takes it, not knowing that Kira's "girlfriend" is inside of it. Kira notices this right away and follows the kid to prevent him from seeing the hand, as he fears that the police could easily trace the ring on it and Kira's fingerprints back to him. Having not left a single clue during his 15-year career as a serial killer, Kira is determined to reclaim his "girlfriend."

Kira follows Shigechi across town until the latter runs into Josuke & Okuyasu again. Shigechi offers to let them into his school's prep room to have the coffee and tea that the gym teacher regularly smuggles into the school, but Josuke & Okuyasu turn him down. Thinking that he can reclaim his "girlfriend" without much trouble, Kira follows Shigechi into his school's prep room and tries to grab the St. Gentleman's bag while Shigechi is busy brewing himself some coffee, but is forced to hide in the gymnastics equipment when Josuke & Okuyasu suddenly join Shigechi, having changed their minds about his offer. While the trio is busy eating lunch, Kira attempts to grab the bag with a straightened-out coat hanger, but drops it, piquing Josuke's curiosity. Just when he is about to investigate the bag, however, Shigechi stops him and accuses him of trying to steal his sandwich. He then leaves again to prepare tea for Josuke & Okuyasu, during which Kira successfully reclaims the bag. Upon noticing that his bag is gone, however, Shigechi sends out Harvest to look for it but is cut short when the gym teacher enters the prep room, driving the three boys out and giving Kira an opportunity to escape without a trace.

Shigechi, however, notices Kira carrying the bag from the same bakery that his sandwich came from, and suspects Kira of having stolen his sandwich. Shigechi tries to take it back with Harvest, but the bag rips open, exposing Kira's "girlfriend." Kira, knowing that he'll probably be exposed, gives Shigechi a monologue on how he wishes to live a quiet life before summoning his own Stand, Killer Queen, aiming to kill Shigechi before the boy can expose him.

“
Here’s an episode that's bound to succeed, and more importantly, an episode where one can feel sympathy for Kira. For example, there’s this moment where he’s hidden under the vaulting boxes and tries to pick up the bag with an iron wire. He’s so meticulous (laughs). When I was young, I had trouble liking Kira’s character, but now that I'm grown-up, I feel sympathetic for him. Is that how it is, to be an adult? (laughs)

Since this episode was mainly scenes about day-to-day life, our animation director, an expert in action scenes, had a lot of trouble with it. I thought it would be easy since there wasn’t any fight, but on the contrary, handling natural day-to-day movements can be difficult.

Part of the episode happens in the storage room of a high school’s gym. We made sure to reproduce every detail as close as possible to real life paraphernalia one could find in such a place.
”
—Naokatsu Tsuda, Blu-Ray limited edition commentaries