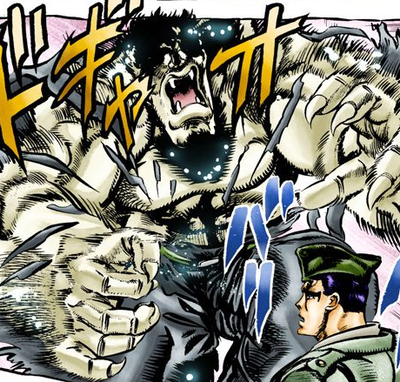 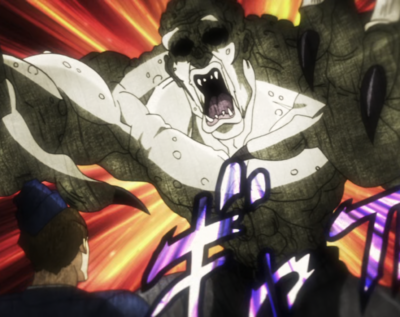 Killed by Lisa Lisa in a surprise attack[2]

As the last remaining zombie created by Dio to survive the events of Phantom Blood, he disguised himself for decades as a commander in the British RAF until his true nature was discovered by George Joestar II. He murdered George, who was subsequently avenged by his wife Elizabeth in a fit of rage.

To integrate himself as a member of society, he disguised himself as a major in the RAF, donning a service dress uniform. He sat on a wheelchair, pretending to be wounded by the war and he never showed himself during daylight.[5] When he reveals his true nature, he is a horrifically large zombie with sharp nails and fangs.[6]

Speedwagon describes him as a cunning zombie, being able to hide for so long as he wasn't attempting to multiply and never left any remains of its victims. He was capable of disguising himself as a member of society for decades, and found out about George's investigation into his identity before he could gather enough evidence against it.[7]

He possesses all the typical characteristics of a zombie. His strength is multiplied and is weak to sunlight and the Ripple. Due to the control he has over his body, he is able to disguise itself as an wounded veteran but his true appearance is that of a large zombie with sharp nails and fangs.

50 years before the events of Battle Tendency, Straizo and Speedwagon made it their mission to eliminate the remaining zombies that Dio had created. Though they seemingly wiped them out, one was able to escape and hide in the shadows for decades.

He found himself a position in the RAF, holding a post as a major. He pretended to be wounded during the war, sitting on a wheelchair and never exposed himself to daylight. The zombie wasn't able to satiate his hunger, but never left a trail as he devoured his victims to the last bones and hair. 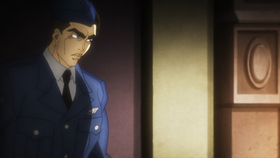 Serving under the zombie was George Joestar II who, after learning of the story of his lineage, suspected the major's true nature. He had been planning to gather evidence to expose it. The major discovered this scheme, and murdered George when he was observing him. George's death was covered up, attributed to an accident during a night flight.

Straizo and Speedwagon suspected this story, and investigated the truth. Elizabeth, in a fit of silent rage rushed to find the major and kill him. Due to her hastiness she was spotted by an officer, and the zombie's disintegrating corpse was understood as Elizabeth setting the major's body on fire. Elizabeth was charged with his murder, and subsequently marked a traitor.[8]

In the light novel JORGE JOESTAR, the major is a human named William Cardinal whose body is later taken over by a zombie named Antonio Torres.