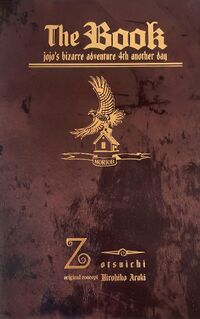 Interview between Hirohiko Araki and Otsuichi, author of The Book: JoJo's Bizarre Adventure 4th Another Day. Conducted by Yoshihiko Tozawa (戸澤好彦, Tozawa Yoshihiko) at an Italian restaurant on October 12, 2007. Published in the January 2008 issue of Jump Square, published on December 4, 2007.