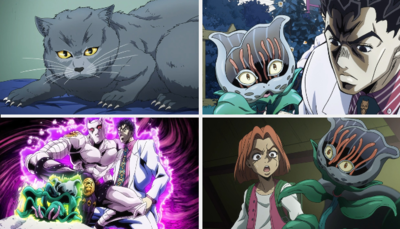 Cats Love Yoshikage Kira (猫は吉良吉影が好き, Neko wa Kira Yoshikage ga Suki)[1] is the thirtieth episode of Diamond is Unbreakable and the one hundred fourth episode of the JoJo's Bizarre Adventure anime. It covers Chapter 392 through Chapter 397 of the manga.

One evening, Shinobu Kawajiri finds a mysterious cat in the basement and it accidentally dies. Kira buries it but the cat resurrects as a plant-hybrid and Kira must assert whether it is an enemy or not.

Having found a stray cat in her basement, Shinobu returns to Kira and begs him for help, explaining the cat's hostility towards her. Kira is enticed upon hearing that the cat had a strange hole in its neck, deducing that it is the result of an arrow strike and that the cat is a potential Stand user. However, when Kira goes down to the basement to investigate, he finds the cat dead, having been fatally pierced by glass shards during a previous fight with Shinobu; from this, Kira determines that the cat must not have been a Stand user due to how easily it died. Kira buries the cat in his backyard, while Shinobu is stricken with grief over her accidental act of murder.

The Stand Stray Cat is born from Tama's buried body

The next day, an odd-looking blue-gray flower grows over the spot where the cat was buried. As the flower blooms, it becomes possessed by the cat's ghost, becoming the sentient plant Stray Cat. Stray Cat is hit with surprise upon realizing its current condition, which turns to anger once he sees Shinobu approaching. It wants to to pay tribute to its former self, blaming her for its death. Stray Cat instinctively fires an air bubble at her foot, tearing off her toenail and striking fear into her heart at the thought of the cat's grave being cursed. After firing another air bubble that kills a bird, Stray Cat becomes conscious of his newfound power. Kira then comes into the yard and notices Stray Cat, determining that the cat he buried was indeed a Stand user based on Shinobu's account of what just happened to her.

As Stray Cat grows in size, Kira performs a number of tests on Stray Cat. He realizes that Stray Cat is the Stand reincarnation of the cat, conceived by the arrow and brought forth from death. Shinobu, meanwhile, asks Kira if the spot he's looking at is really where he buried the cat, citing her dislike of that spot due to it being where she lost her toenail. Kira, however, is more concerned about not letting Shinobu notice the plant moving, fearing that it would allow Jotaro to trace it back to him. Thus, Kira sends out Killer Queen to discretely blow up Stray Cat and get him out of his hair, only for his bomb to dud; Kira determines that this anomaly is the result of Stray Cat's powers. Shinobu sees Stray Cat moving, but is knocked out by one of its air bubbles. When Stray Cat knocks away Kira's bomb, it goes off, allowing Kira to deduce that the plant is surrounding itself with a vacuum bubble to suppress Killer Queen's weaponry.

Killer Queen and Stray Cat square off. During their fight, Stray Cat uses an air bubble to blow up a nearby cactus, covering Kira and Shinobu in cactus spines. Kira panics that Shinobu got hit, and then is stunned when he realizes that he just worried about some woman. He backpedals by stating he was only relieved that her eyes weren't struck by the spines because if something happens to her then it would be easier for Jotaro to discover his identity. Stray Cat fires more compressed air bubbles but Killer Queen blocks it. Kira says the attack is nothing against his Stand now. However, the cat-plant simply grooms itself while Kira realizes that its attack got air inside the blood vessels of his forearm. The air progresses up Kira's arm and moves toward his heart, threatening to cause a deadly embolism due to its large dosage, forcing Kira to stab his arm open to release the excess air. Stray Cat prepares to attack him again, but Kira is at a loss of how he could defeat it. Just then, he spots a golf ball on the ground and rolls it over to the cat-plant. Stray Cat notices the ball and has fun rolling it around with its leaves. Thus, Kira is saved for now as the cat is distracted from its grudge.

The next day, Shinobu contemplates the events surrounding the stray cat. She determines that the cat's curse was a figment of imagination, while simultaneously expressing infatuated embarrassment that she passed out in front of her husband. Kira, meanwhile, notices Hayato spying on him and Shinobu, noting the child's suspicious behavior during his time as Kosaku Kawajiri. As it turns out, Hayato has been attentively noting discrepancies in his father's behavior all this time, and skips school to review the latest videotape he secretly took of him. Hayato watches the video he recorded of his dad's room from the night before, and sees Kira writing Kosaku's name over and over. He also sees Kira taking a flower pot full of soil and a large bag of cat food to the walk-in closet. Hayato decides it's time to investigate.

Hayato makes his way to the closet then to the attic, stumbling upon Stray Cat; as Stray Cat is bound to a plant, he is visible to Hayato. Hayato pokes the mysterious plant, wondering what it is. When it has no reaction, he's disappointed that it's an ordinary plant, yet wonders why his "dad" would smuggle it up to the attic. Since it's dark, he opens the window and notices the sack of cat food in a cupboard. Just then, a ray of sunlight shines on Stray Cat and it wakes up, startling Hayato. He remarks about how the plant has eyeballs and is staring at him. Meanwhile, Kira notices a group of kids from Hayato's school, and notices that they're all wearing identical yellow sun hats. Remembering that Hayato left his hat at home, Kira returns to the Kawajiri household, realizing that Hayato is most likely still at home and up to no good. Hayato, startled by the sudden return of his "dad", tries to shut the window. However, Stray Cat hisses and fires compressed air bubbles which morph into the shape of cuffs around his neck and wrists, to bind Hayato in mid-air. Hayato is then hit by another air bubble to his torso, which sends him flying backwards and knocks some jars over. Kira hears the noise and rushes up to the attic in a panic.

Hayato realizes that his father is definitely not Kosaku Kawajiri

Although Hayato can't see what's binding him, he notes that it feels like a balloon and pops all the bubbles with a compass from his backpack. The air that bursts out of the popped bubbles then shuts the window, sending Stray Cat back to sleep. Quickly, Hayato grabs the cat food and pours it all over the floor to make it look like Stray Cat made a mess. Just as Hayato planned, Kira reaches the attic and assumes that Stray Cat somehow used its power over air to grab the cat food, although he wonders how the feat was done without any light. Relieved that Hayato wasn't in the attic, Kira leaves, but not before thinking out loud that he would have to kill Hayato if the boy discovered his secret. Hayato, frightened while hiding inside a box, understands that the man living in his house definitely isn't Kosaku Kawajiri. 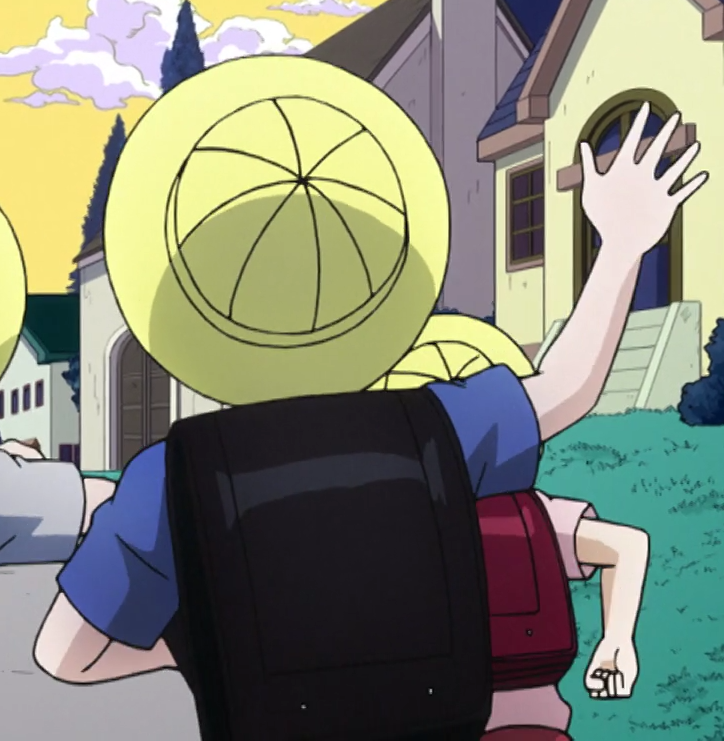 “
This is the episode where Hayato figures out what's going on thanks to the 'cat-plant'. We ended up adapting six manga chapters into one episode, so everything went very quickly. It was necessary, however, in order to kick things into high gear and rush toward the final battle.

'Kosaku Kawajiri' begins to develop feelings for Shinobu. He was even clearly troubled when she was attacked by the cat-plant. When I read the manga, I told myself that after this incident, Kosaku would question his feelings about his new family, but that wasn’t the case at all. In the end, his every action was conditioned to ensure his survival. (laughs). However, he was clearly disturbed by his own emotions, that's a fact. The episode's direction was intended to make the audience doubt Kosaku’s true nature.

The cat-plant that appears in this episode actually has three evolutionary stages. You can differentiate them by the features on its face. I hope you’ll be able to see these differences.
”
—Naokatsu Tsuda, Blu-Ray limited edition commentaries