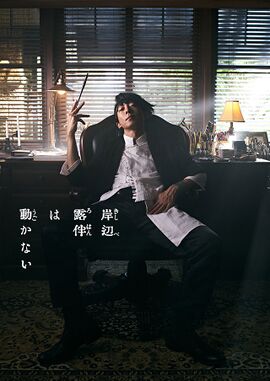 Thus Spoke Kishibe Rohan (岸辺露伴は動かない, Kishibe Rohan wa Ugokanai) is a live-action mini-series based on the manga series of the same name by Hirohiko Araki. It is produced by and aired on Japan's national broadcaster NHK

who plays the character of Kyoka Izumi, Rohan's editor, adapted from the same character in Millionaire Village. Unlike the original one-shots, Kyoka is now a recurring character and reappears in all of the episodes Tomoya Nakamura

for the TV show category in January 2021. It was chosen because the drama beautifully recreated the bizarre world of the original work, and was steeped with a unique aesthetic sense with meticulous art and direction. Yasuko Kobayashi's script accurately depicted the essence of the original work. The actors all played their parts well. In particular, Mirai Moriyama made the most of his physical abilities and excellently portrayed a sense of discomfort with his character, Jugo Shishi.[3]

The Kachi Villa in the town of Hayama, Kanagawa

, was used as Rohan Kishibe's house. The drafts of the fictitious Pink Dark Boy manga that appear in the drama were drawn by Masahiko Aoki.[4]

The cafe where Kyoka Izumi and Taro Hirai drink is the real-life cafe Enokitei Honten, situated in Yokohama

.[5] The cascade where Kyoka rests was identified as the Tateshina Otaki. The luxurious mansion of the Millionaire Village is in reality a house named the Omori-Musasino (大森武蔵野苑). It is a historial site situated in Koganei, Japan.[6] The tea cups used in the luxurious mansion are made of Coalport porcelain

in an Adelaide shape with a phoenix motif, dating from approximatively 1830.[7] Rohan's own tea cup shown at the end of the first episode is a Saint-Médard silver plated metal tea cup. Manners consultant Hiroko Nishide

worked on the episode to guide the production team about the proper manners to adopt.[8]

In Kushagara, the red book that Jugo Shishi grabs in his office is a volume from the Soseki Collection (漱石全集, Sōseki Zenshū), a collection of Japanese novelist Natsume Sōseki

. The cafe where Rohan meets Jugo Shishi is the real-life cafe Yamata Jubankan situated in Yokohama

. The sloped path in which Rohan tells Kyoka about "kushagara" is situated in a road in Yamanouchi. The place where Kyoka meets Taro is the Harbor View Park Observatory in Yokohama

. The bookstore in which Rohan meets Jugo Shishi again is the real-life book store Tenpodokaribe in Yokohama.[9] The isolated alley in which Rohan confront Jugo about his obsession is situated in a path in Tama Ward, Kawasaki, in the Kanagawa Prefecture.[10] Jugo Shishi's office was filmed in a building in Kawasaki. The "university building" used in the introduction of the episode is in reality an annex of the Yamanashi Prefectural Office, in Yamanashi Prefecture

In D.N.A., the park used as the production set for the episode is the Sagamihara Park.[11] Mai and Mao Katahira's house is the Megurohonchou studio. The sloped path in which Rohan meets Mai and Mao Katahira is the Motomachi Park's Hitaizaka, in Yokohama

. The hospital in which Taro is brought is actually the NHK's broadcasting center in Shibuya, Tokyo.

Issey Takahashi
I never thought the day would come when I would be able to play "Rohan-chan", a character that I've loved since I was in high school, so I was deeply moved. During the filming, I was conscious of how much I could physically express something like the continuity of movement between the panels of the original manga. This is something that I have never done before in my acting career, so it was a very enjoyable time for me as an actor. It was a real blessing to be able to discuss the design and details of Rohan's costumes with the staff over and over again.
Marie Iitoyo
I really enjoyed filming this time because it was a drama adaptation of Thus Spoke Kishibe Rohan, which is derived from the popular manga JoJo's Bizarre Adventure. Each line of Rohan Kishibe, played by Issey Takahashi, is stylish and literary, and I hope you will enjoy his long conversations with Kyoka Izumi, his female editor and accomplice. I am truly grateful for the opportunity to participate in this work.
Fuga Shibazaki
My character, Ikkyu, is a boy with strict manners, so before the filming, I learned how to behave in the story from the guidance of an instructor who teaches manners. It was difficult to make proper movements while saying the lines, and I was especially nervous during the scene where I had to carry the teacup. Ikkyu is a character with no flaws, but he takes unexpected actions when he meets Rohan-san, so I hope you can look forward to it. I also love the costumes and make-up, which were designed by a stylist and make-up artist who were very particular about the measurements and styling, so I hope you will pay attention to that as well.
Mirai Moriyama
I accepted the role because it was the first time in a long time that I could act with Issey Takahashi. There are many hurdles to overcome when adapting a manga into a live-action film, but the Kushagara episode that I acted in was only published as a novel which follows Hirohiko Araki-san's detailed and absurd story and character models, so I was able to freely envision how to play my role. I hope you enjoy it.
Kumi Takiuchi
I was overwhelmed by the world and atmosphere depicted in the original story, but I think that this live-action drama has a great deal of respect and common understanding of the original story, and the same attention to detail in the visuals. The hair, make-up, and fashion look like they are straight out of the manga. For my episode, the director, Mr. Watanabe, put a lot of emphasis on the reality of the story, so he made sure that the drama was carefully crafted to maintain the world of the original story, while also providing original parts that can only be seen in the drama. I think the highlight of the drama is the visuals and acting of Issey Takahashi, who plays the role of Rohan Kishibe. It was beautiful to see. Also, Marie Iitoyo, who plays Kyoka Izumi, has a cute and elegant appearance. Please check it out!
Tomoya Nakamura
The staff's love for JoJo and respect for the original work was incredible, so I was confident that if they cared so much about it, this live-action adaptation would be wonderful. I played the role of Hirai with the aim of creating a mysterious, flickering, shimmering presence. Please look forward to it.
Issey Takahashi
高校生のときから好きだった“露伴ちゃん”を演じることができる日が来るとは思っていなかったで、感慨深かったです。撮影では、原作漫画のコマとコマの間にある動きの連続性のようなものを、どれだけ肉体で表現することができるかということを意識していました。これまでのお芝居ではなかった作業で、俳優としてとても楽しい時間でした。露伴のコスチュームのデザインやディテールにいたるまで、スタッフの方々と何度も話し合って作り上げていくことができたことは本当に幸福でした。
Marie Iitoyo
今回、大人気漫画の「ジョジョの奇妙な冒険」から派生した「岸辺露伴は動かない」のドラマ化ということで、とても楽しんで撮影させて頂きました。高橋一生さん演じる岸辺露伴のセリフ一つひとつがお洒落で文学的でもあり、相棒となる女性編集者・泉京香との長回しの会話劇もぜひお楽しみいただけたら嬉しいです。本当にこの作品に参加させていただけたこと心から感謝しています。
Fuga Shibazaki
僕の演じた一究はマナーに厳しい少年なので、撮影前にマナー指導の先生の元、お話しに出てくる立ち居振る舞い方を学びました。台詞を言いながらきちんとした動きを取るのは難しく、ティーカップを運ぶシーンは特に緊張しました。隙のない一究ですが、露伴さんに出逢い思いもよらない行動を取ってしまうので、楽しみにして頂けたらと思います。また、衣装やメイクも採寸から始まりスタイリストさんメイクさんのこだわりの詰まった僕も大好きなスタイリングなので、そちらも是非注目して見て頂けたら嬉しいです。
Mirai Moriyama
(高橋）一生と久しぶりに芝居ができる、ということで引き受けさせていただきました。 漫画原作の実写化は何かとハードルが高いものですが、参加させていただいた「くしゃがら」に関しては、荒木飛呂彦さんの描く緻密かつ荒唐無稽なストーリーやキャラクター造形を踏襲しつつも、出版されているものが小説のみということで、イメージを膨らませつつ自由に演らせていただきました。楽しんでいただければ光栄です。
Kumi Takiuchi
原作で描かれている世界観、息遣いに圧倒されっぱなしでしたが、今回の実写化ドラマでも、原作へのリスペクトと共通認識、そして、やはりビジュアルに物凄くこだわりがあったと思います。ヘアメイクもファッションも漫画から飛び出してきたような造りになっています。 私の回はリアリティーを重視していたので、演出の渡辺さんがお芝居に対して丁寧にひとつひとつの積み重ねをさせてくださり、原作の世界観を大切にしつつも、ドラマにしかないオリジナルな部分もご用意させてもらっています。見どころは何と言っても"岸辺露伴"を演じた高橋一生さんのビジュアル、お芝居すべてだと思います。この上なく眼福でした。そして"泉京香"を演じた飯豊まりえさんの可憐さと気品ある姿も。ぜひご覧ください！
Tomoya Nakamura
スタッフの皆さんのジョジョ愛、原作へのリスペクトが凄まじく、「ここまで想っているなら、この実写化は素敵なものになるに違いない」と確信を持ってクランクインしました。どこか不思議な、たゆたう陽炎のような存在感を目指して平井という人物を演じました。ご期待ください。