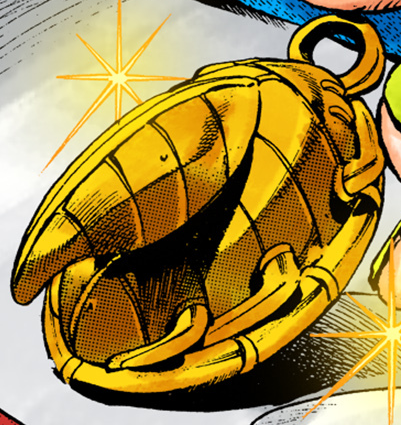 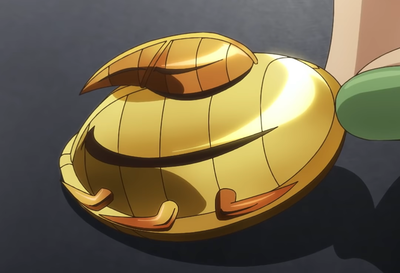 SO Episode 1
“
This 'string' ability...It's my own power...Also... 'using my will to protect myself'... since I broke my fingernail, I'm beginning to understand the significance of the pendant...
”
—Jolyne describing the Pendant, SO Chapter 1: Stone Ocean, Part 1

The Stone Pendant (more generally the Pendant (ペンダント, Pendanto)) is a prominent item introduced in the sixth part of the JoJo's Bizarre Adventure series, Stone Ocean. The pendant, and by extension the shard of a Stand Arrow it holds, is an important item in the opening parts of Stone Ocean.

The Stone Pendant is a small golden pendant in the shape of a beetle, similar to the one seen on Polnareff's Stand Arrow. The pendant opens by pressing the top spike. Inside is a photo of Jolyne's father, Jotaro Kujo, and her mother, as well as a small shard of an unidentified Stand arrow. The pendant also contains a transmitter which allows the Speedwagon Foundation to track Jolyne and send signals to an automated escape submarine.

The pendant was originally owned by Jotaro. However, at an unknown time, he gave it to Jolyne's mother, who was told to give it to Jolyne if she was ever in danger.

The pendant came into possession of Jolyne shortly after she was taken to a holding cell. She was given the pendant along with other essentials like clothing by her lawyer. However, she soon pricked her finger on a shard of a Stand Arrow kept inside. After learning about the pendant's origin and learning it was from her father, she throws the pendant away in anger. Later, Jolyne discovers her power to control a string from her finger, and soon realizes that this power came from her getting pricked by the shard in the pendant

After the pendant was thrown away by Jolyne, it was found by Ermes Costello, who pricked herself and then sold the pendant to Gwess. Soon after pricking herself, she had fallen ill.

Jolyne is brought to her cell, where she meets Gwess, her roommate. Jolyne quickly notices the pendant, now in Gwess's possession, but Gwess refuses to give it free, insisting that despite the fact it is a familial heirloom, she will only sell it for $200. The next day, Gwess wakes Jolyne up and shows her the pendant and shows her that it is empty and that she found it that way. Later though while looking in the trash bin, Jolyne spots the photo of her parents. Later after discovering Gwess's ability and going to the security room with her, Gwess uses the pendant to distract Jolyne by dropping the pendant on the ground and punching her through the bars of the gate. However, Jolyne defeats Gwess soon after and regains the pendant.

Once Jotaro officially meets Jolyne, he begins to discuss the pendant with her. He believes that she inherited the potential to gain a Stand from the shard of the Arrow inside, and asks whether she had gained the power of a Stand. Later after beating Johngalli A. and escaping Melt Your Heart, Jolyne trips and falls. Jotaro reaches out to Jolyne, and after believing he is reaching to help her up, she realizes that he was actually trying to give her the Pendant that she had dropped. He reminds her that she needs to keep the Pendant safe and how it has a tracking device monitored by the Speedwagon Foundation, to which Jolyne throws the pendant back at him. Later after having his DISC's stolen, Jotaro returns the pendant to Jolyne before going unconscious. The pendant is last seen when Jolyne goes to deliver Jotaro's body to the submersible vehicle, where she drops it into his jacket.

Owners of the Pendant

Owners of the Stone Pendant

Gwess
Stands Awakened by the Arrow Shard within the Stone Pendant