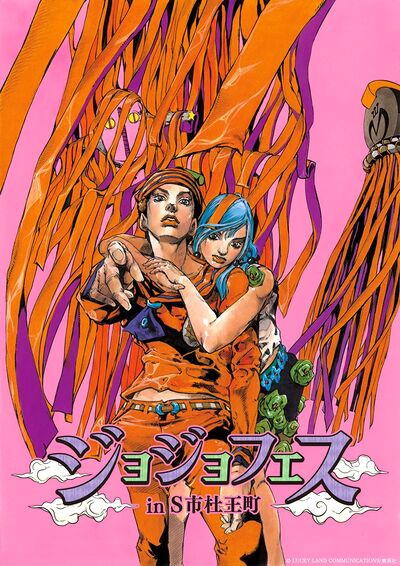 Announced at the JoJo Great Festival on February 19, 2017,[1] the event's main highlight was the Hirohiko Araki JoJo Exhibition 2017,[2] which celebrated the 30th anniversary of the JoJo's Bizarre Adventure series[3] and featured newly-drawn visuals by series' creator, Hirohiko Araki. The festival also featured various other Diamond is Unbreakable-themed attractions and shops spread throughout the city.

JoJo Fes Cafe in the Sendai Forus (JOJO Fes CAFE in 仙台フォーラス) was a Diamond is Unbreakable-themed restaurant that was held at the Sendai Forus shopping mall on August 13, 2017 during the JoJo Festival in Morioh, S-city event. The menu consisted of stylised food and beverages based on the series.

Anime Exibition & Trattoria Trussardi in the Koyo Grand Hotel (アニメ原画展&TRATTORIAトラサルディー in 江陽グランドホテル) was an event which celebrated the recent success of the Diamond is Unbreakable anime series. It was held at the Koyo Grand Hotel from August 13, 2017 to August 27, 2017 during the JoJo Festival in Morioh, S-city event. At the event was the Trattoria Trussardi Cafe, which sold gourmet and merchandise based on the series.