Every Day Is a Summer Vacation, Part 2 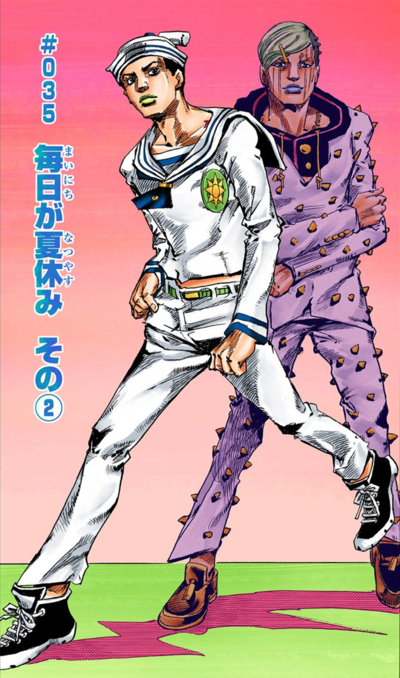 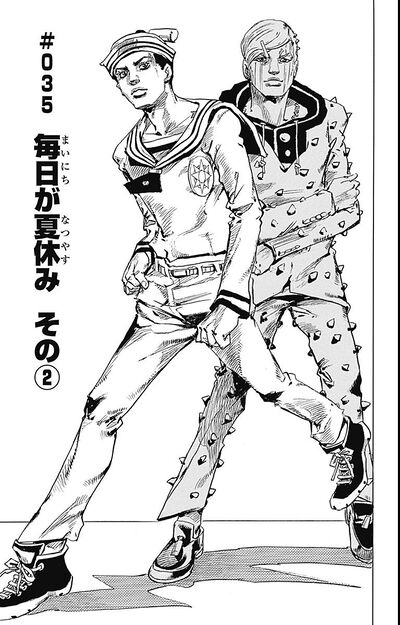 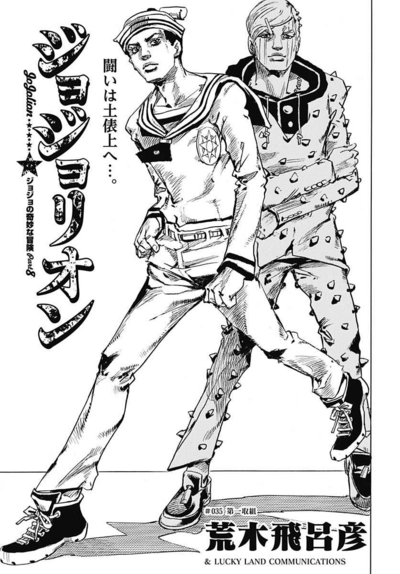 Every Day Is a Summer Vacation, Part 2 (毎日が夏休み その②, Mainichi ga Natsuyasumi Sono 2), originally The First Bout (第一取組, Dai Ichi Torikumi) in the UJ release, is the thirty-fifth chapter of JoJolion and the eight hundred eighty-second chapter of the JoJo's Bizarre Adventure manga.

The chapter opens with Josuke silently wondering what makes a person bad, be it 'desire', 'jealousy', 'lazyness', 'resentment', or even 'innocence'.

Jobin now uses his brush to wipe his beetle and excite him, confident that with the 'fighting spirit' it acquired, it will win the match. Reminding Josuke of the bet, Jobin decides to lower the stacks and have the loser shave one eyebrow. Josuke accepts and confidently puts his beetle on the arena.

The match begins between Josuke and Jobin's Dorcus Titanus Palawanicus. Josuke reminisces asking Tsurugi what his father's Stand ability is, only for Tsurugi to answer that he doesn't know, only counseling to stick with the beetles and uses female beetle pheromones to raise his beetle's fighting spirit. Both beetles begin to grapple each other, and Josuke's is being pushed towards the border of the arena. Suddenly Josuke's Palawanicus gets a mandible cut off, and Jobin smugly reveals that he sharpens his beetles mandibles. Josuke's beetle holds its ground but the opponent begins to slice it in two, shocking Joshu. It is that moment that Josuke chooses to pop the small bubbles containing female pheromones he planted in the soft rush ring. His beetle smells the pheromones and pumped up, manages to lift Jobin's Palawanicus in the air. It subsequently runs away and Josuke wins his match. Jobin can only seethingly shave his left eyebrow.