The Wonder of You, Part 7 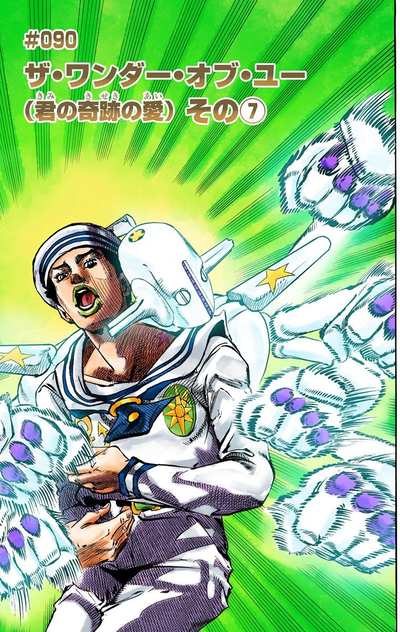 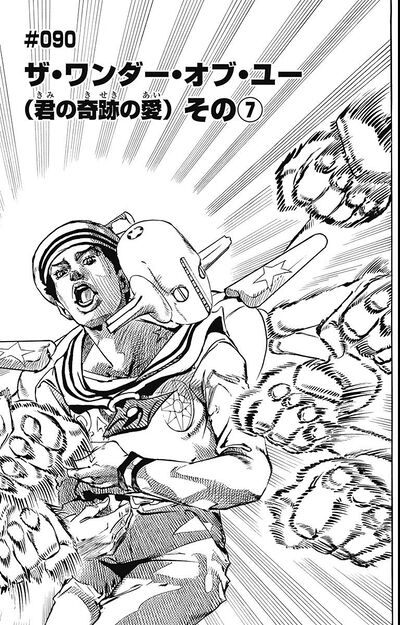 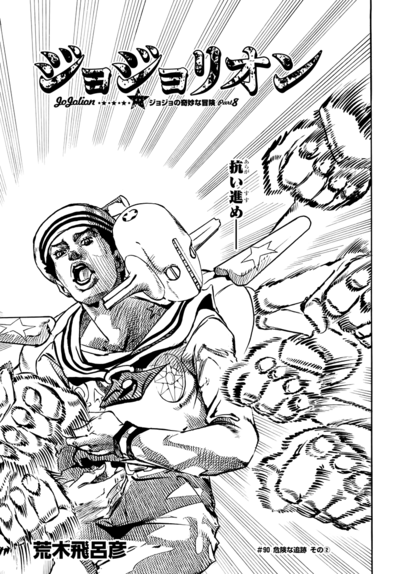 Josuke Higashikata and Rai Mamezuku are under attack from Satoru Akefu's Stand, which triggers with the mere intention of pursuing Akefu. As the rain itself turns into a deadly hail due to the enemy Stand's ability, Josuke and Mamezuku have been forced to take refuge into a police car, shocking and angering two policemen who were sitting inside of it. The policemen ordered the two to step outside of the car as other police cars show up and the police surround them.

Seeing that their situation is nearly hopeless, Josuke tells Mamezuku that "Josuke" was merely temporary. He adds that he is currently a "ghostly" individual with no past and even though half of his body was Josefumi Kujo, he has no memory of Josefumi's past nor does anyone from his past care about him at the moment. Thus, he explains that it is why he absolutely must find the Locacaca and obtain the perfect equivalent exchange for Holy Joestar-Kira's sake, as proof of his existence. This last declaration makes Mamezuku uneasy because of its implications. Deciding to pursue Satoru Akefu alone and to reach the lecture Satoru Akefu will be giving in two days, Josuke steps foot out of the car.

The raindrops shoot through Josuke's body, severely wounding him to the point he loses consciousness. Mamezuku then notices that the attack has stopped as the raindrops now harmlessly land on his hand. He is apprehended and angrily yells at the policemen to call an ambulance. Josuke is taken away by an ambulance but Mamezuku still has no confirmation where he's being taken and if Josuke will actually go to TG University Hospital. A policeman mentions hearing the name "Josuke Higashikata" and asks Mamezuku if that was his name, telling him that the police would eventually know everything after an investigation. Mamezuku remains silent.

In another part of Morioh, Toru and Yasuho are sitting on her porch enjoying the day. Pointing at a direction in the sky where the Perseus constellation should be, Toru recalls an instance during which Yasuho said that "Electricity spills out and flies into the sky. Even if there's no holes in the power lines." Said sentence seemingly inspired Toru to invent a mechanism to charge objects through induction and with no electrical outlet, which was ignored by all the companies he's contacted. This story makes him mention that he had suffered from anxiety before and that anxiety pushed him away from her. Kneeling in front of Yasuho, Toru thus proposes to her again, imploring her to think back to these happy times together.

However, Yasuho is then distracted by a phone call. Paisley Park is noticed a security camera recording Mamezuku shopping for items, but Yasuho then loses his trace again. As she tries to search for Mamezuku, Yasuho is interrupted by Toru who mentions seeing her chasing after Satoru Akefu back at the hospital. He proposes to show photos of him to Yasuho and shows the one he has to her, finally revealing what Satoru Akefu looks like. However, Yasuho is then shocked to see that Mitsuba Higashikata is with him. Immediately after, the rain reaches their location. Time remaining before the harvest: 48 hours.