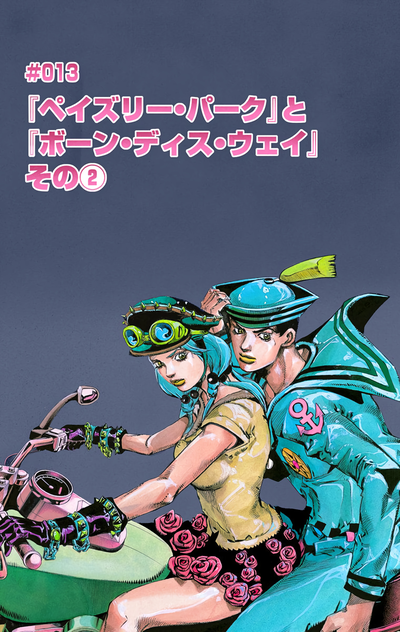 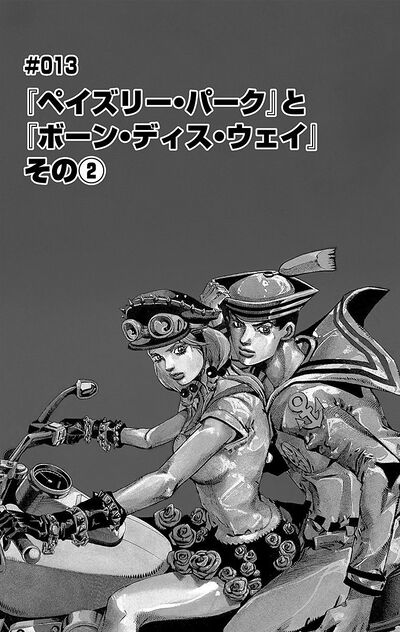 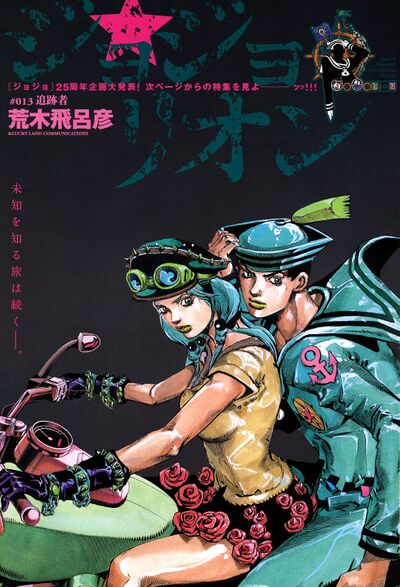 "Paisley Park" and "Born This Way", Part 2 (『ペイズリー・パーク』と『ボーン・ディス・ウェイ』 その②, "Peizurī Pāku" to "Bōn Disu Wei" Sono 2), originally The Pursuer (追跡者, Tsuisekisha) in the UJ release, is the thirteenth chapter of JoJolion and the eight hundred sixtieth chapter of the JoJo's Bizarre Adventure manga.

The chapter begins with Josuke who finds the back of his head impaled on part of a broken handrail. He recaps previous events stating that he has no idea who he is, and in order to find out, he needs to find a woman by the name of Holy Joestar-Kira. The GPS he is using continues to tell him to make a U-turn, and though he pulls himself off, Josuke is too dazed to move. A cold wind begins to blow and leaves fall upon him. The leaves begin to freeze into ice on Josuke's face, which makes him realize that he is actually being attacked by the mysterious black rider's Stand power. The wind begins to blow again, and Josuke is pushed across the stairs toward the other handrail. He manages to rip out the part of the handrail from the back of his head and then summons his Stand, Soft & Wet, and uses its power to plug up the injury. Upon reaching the top of the stairs, he makes a phone call to Yasuho, explaining that there is a change of plans. He tells Yasuho, that he won't be able to make it there and that she should go on ahead to Holy Kira. Yasuho is confused, but Josuke tells her that it would be dangerous if they met at the moment, and that there appears to be someone tailing him. He hangs up on her and looks at his GPS. It tells him to turn right, which confuses Josuke as it appears to be constantly changing the route that he is supposed to take. Suddenly, Josuke is hit with another blast of freezing wind, and he is pushed against the wall. The blood from his wound splatters onto his eyes, and that along with his eyelashes begin to freeze into ice. He is unable to see, and his GPS has also frozen to his fingers. Josuke is pushed by the wind again, but he is able to summon his Stand to cushion his fall. Unfortunately, the pen he had in his pocket managed to stab into him in the process.

The black rider reappears, thus causing more of the wind to blow. The breath inside Josuke's mouth also begins to solidify into ice, and he is unable to breathe. He warns the rider to stay back, but the rider relentlessly charges at him. Moments before, however, Josuke's GPS tells him to move upward. Josuke is confused at first, but he reaches upward and grabs the handle of a nearby pole. From there, he is able to lift himself up and essentially dropkicks the biker off the motorcycle. The wind stops, and Josuke is able to rub the ice and blood away from his eyes.

The biker is dazed, but eventually gets up and removes its helmet, revealing itself to be not a human, but a Stand; meaning the real user is somewhere nearby. Before Josuke can do anything, however, the unknown Stand quickly gets back on its motorcycle and drives away. The GPS tells Josuke to turn downward since he is still up on the pole and with that Josuke realizes that it isn't a normal GPS and there appears to be two Stand abilities afoot. One is the Stand that attacked him by blowing wind, and the other is the GPS. It appeared to have been guiding him and was not actually "spouting nonsense," but rather, telling him how to avoid the black rider Stand. Josuke understands that he may have an enemy, but is completely baffled as to whom the ally giving him guidance with the GPS is.

Yasuho seems to have the same reoccurring bite mark on her ankle and is making her way into the hospital to find some medicine, as well as to find Holy. As Yasuho walks to the pharmacy, Holy can be seen behind her. Holy is calculating the distance between her and the birds outside the window, similar to what Josuke did when he was in the hospital.

Author's Note
“
When I was walking around the neighborhood, I was attacked by crows and they took my hat. They gave it back though.
”
—Hirohiko Araki
“
近所を歩いていたらカラスに襲われて帽子を奪われた。返してもらったけど。
”
—Hirohiko Araki