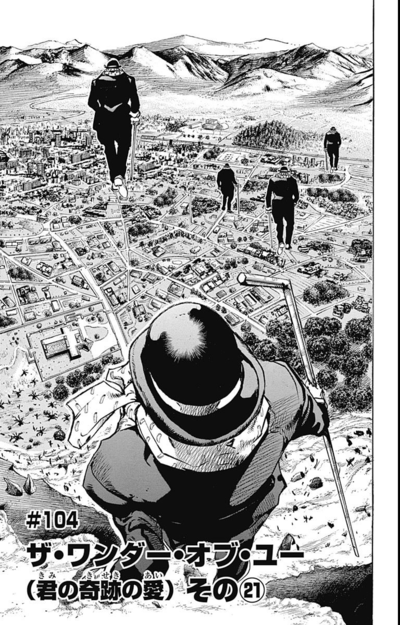 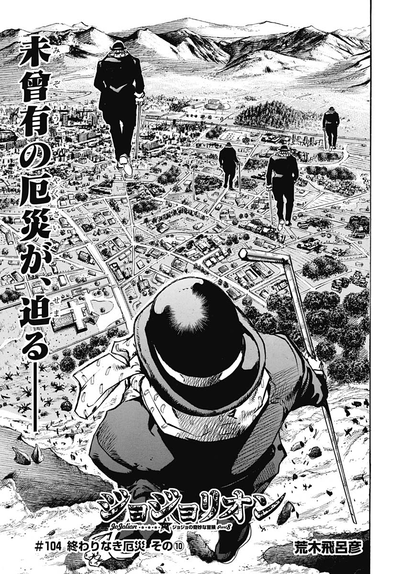 Wonder of U has been finally wounded along with his cane broken. Josuke uses this opportunity to smash more vials of the Locacaca 6251 with Soft & Wet and sees the trails of invisible spheres in the mist caused by Born This Way's freezing wind. This reminds him of Rai Mamezuku's explanation of his bubbles' true nature as invisible, spinning lines.

Wonder of U itself is astonished to have been wounded and turns back to face his attacker, uncertain as to how someone could overcome the calamities that should stop anyone from pursuing it. Kei Nijimura tells Josuke that she came here to deliver her mobile phone to Josuke, and it is revealed that Wonder of U's broken cane lodged itself into Kei's eye. As she tells Josuke that she has a call from Yasuho, Kei collapses on the ground, and Born This Way crumbles apart. She drops the phone, which slides towards Josuke's feet. Meanwhile, Wonder of U reflects on what attacked him. Confident that this world's "logic" should cause calamities to anyone pursuing him, he theorizes that the attack is coming from something that doesn't exist in this world. Therefore, it is not subject to the world's logic. Toru quickly realizes that Soft & Wet's bubbles are the danger.

At the Higashikata House, Toru decides to reveal himself and quickly heads towards Yasuho. Meanwhile, Paisley Park appears, and Yasuho explains through it that she is at the Higashikata residence. She also reveals that Toru is right in front of her and that he is the user of Wonder of U. If they can kill the user, then the calamities will end. Wonder of U begins to leave the room, as Toru explains that although he'd like to finish Josuke off, Josuke is a danger to him, and he will merely let the flow of calamity kill him. Toru declares that what matters is getting his hand on the new Locacaca and says that he'll take the potted plant then disappear from society. Toru orders Yasuho to step aside.

Standing near Mamezuku and Kei's bodies, Josuke suddenly feels as if their hands were grabbing his. He turns his head, but their bodies are still on the ground. Josuke starts to think about his options. He also hears Mamezuku telling him that Wonder of U's departure shows that he can win against the hospital director, that the spinning of his invisible lines is the key, and that he must use that to defeat the enemy. However, Josuke hesitates as he still doesn't fully comprehend the power he wields and fears that his attack will cause further calamities for his allies and loved ones.

At the Higashikata House, Yasuho asks what will happen to her, but Toru says that even he doesn't know what will occur since calamities make no distinction between right and wrong. He assures that she will die, but to ensure the New Locacaca is not destroyed alongside her, Toru wants Yasuho to give him the pot. Joshu gets up and begins to threaten Toru, angry that he is talking to her so casually. Toru warns him not to think about pursuing him, which only angers Joshu further. Joshu summons Nut King Call to attack. However, everyone now sees something huge falling out of the sky towards them. This prompts Toru into grabbing Yasuho and tell her to give him the pot, which in turn makes Joshu attack. However, a passing leaf cuts off two of Joshu's fingers. Shocked at this sight, Joshu trips and falls over Yasuho, releasing the pot. Toru is thus free to pick up the pot and he says his farewell to Yasuho. Panicking, Yasuho tells Josuke that something is coming towards her.

Left with no choice, Josuke goes after Wonder of U, a bubble at his fingertip ready to be shot. Wonder of U is near the elevator and sees Josuke. Josuke hears Mamezuku again, who assures Josuke that the things Josuke cannot see and don't exist in this world can overcome even the curse of the Higashikata Family. Wonder of U tells Josuke one last quip before turning his head and entering the elevator, but Josuke shoots his bubble at this moment. Suddenly, a bubble-like sphere comes out of his Joestar Birthmark.