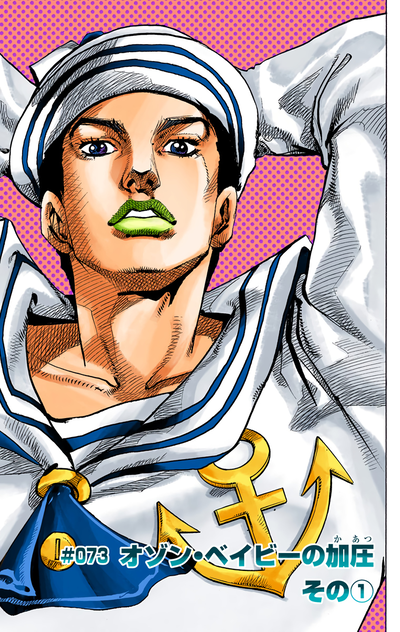 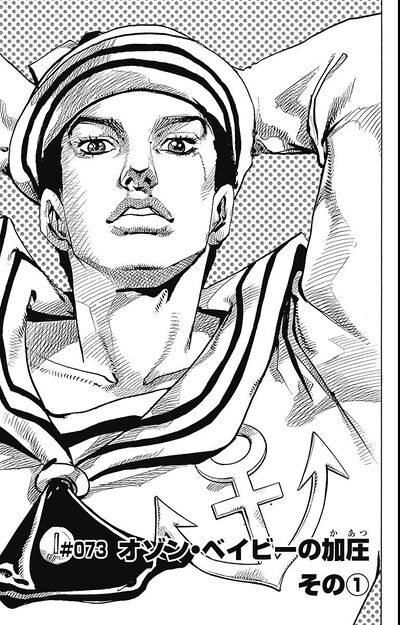 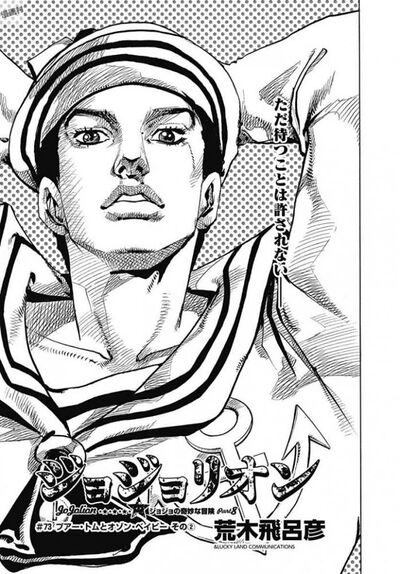 Jobin Higashikata finds himself under attack alongside his son Tsurugi and Iwasuke. The boy and his dog lay inside the garage, coughing blood and suffering grave injuries as Ozon Baby hovers above them.

Jobin steps outside of the shed to help Tsurugi but falls under Ozon Baby's influence; his eyes and ears also begin to bleed. He realizes that the attack isn't a poison or a disease, but that it has been triggered as soon as he went out of the shed. He grabs Tsurugi but his wounds prove to be too grave for him to move. Thankfully, Jobin manages to summon Speed King and makes it throw him back into the shed by driving a nearby car. Once inside the room, Jobin closes the door and notices that the air is repressurized. Thus, he manages to understand that anyone opening any sealed space will suffer lethal decompression regardless of the person.

While Jobin curses his predicament, Josuke and Rai Mamezuku begin to suffer the decompression from inside the underground tunnel. Noticing their nosebleed and headaches, they understand that an enemy Stand is attacking them, but mistakenly decide to open a hatch to escape the tunnels.

For his part, Jobin unravels the subtleties of Ozon Baby and then notices it slipping inside the shed. He orders Speed King to punch it, but the hits go through the enemy Stand. Seeing the decompression starting again, he opts to help his son and creates a makeshift oxygen tank and breather by heating bleach, and putting a tube inside a water bottle. Tsurugi regains consciousness, and asks his father what is his connection to the enemy. Jobin doesn't answer, but explains that his views clash with that of Norisuke, and swears that he will find the cure to the Rock Disease no matter the cost, stating that he wants to keep the Locacaca to himself and kill Poor Tom. Sensing that Josuke and his plant appraiser ally must be in the garden, Jobin plans to use them to earn victory.